I’ve been keeping a watchful eye on Prince Edward Island’s electricity usage for the past couple of weeks, and noted that this Monday afternoon we hit what appears to be a new all-time peak load of 230 MW around 5:00 p.m. (the blue line at the top is electricity usage; the orange line under it is energy generated by the wind):

A figure of “more than 220 MW” has been used recently in reference to PEI’s peak load; the PEI Energy Commission, for example, said:

In an effort to learn more about the implications of a 230+ MW peak load, I learned the following quick facts about PEI’s electricity infrastructure:

Here’s a chart from the PEI Annual Statistical Review that summarizes this back to 2004: 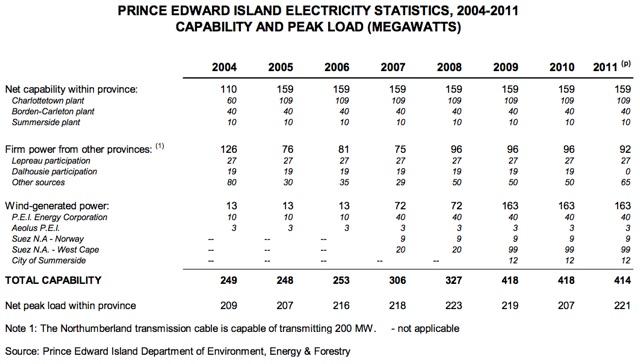 It’s interesting to compare our figures here in PEI with those in Ontario (which, granted, because of industry and its urban character, would be expected to have a different energy profile). As I type the load in Ontario is 17,248 MW; with a population of 12,851,821, that means load is 1.4 kW per person. Here in PEI at the same time the load is 209 MW for a population 145,855, which makes our usage here almost exactly the same 1.4 kW per person.

Our yearly annual consumption of 1.1 million MWh makes the yearly average here on Prince Edward Island 7,541 kWh per capita, or about half the Canadian average (but 10x the usage per capita in Morocco).

This agrees roughly with this interesting infographic from Canadian Geographic that shows PEI as the province with the lowest per capita in-home electricity usage; the same infographic shows that where we’re really consuming in the energy on PEI — 4th highest province in the country — is in energy used for transportation, a good reminder that while electricity is easier to measure and report on, the real culprit we need to be concentrating on is oil consumption.

For the record, between gasoline and fuel oil, Prince Edward Island’s consumed 580,769 cubic meters of oil in 2011; that’s almost 4,000 litres per capita.

Interesting that the new peak occurred on the night of the first snow storm when evening events were cancelled. Perhaps more people at home using more electricity instead of out driving using more gasoline.