I spent this morning being trained to use an Objet30 Desktop 3D printer up in the nascent fablab in the Engineering Department at the University of PEI.

Remember last week when it was announced that an “old line” 3D printer company called Stratasys was going to purchase the “young upstart” 3D printer company Makerbot? Well one of Stratasys’s projects is the Objet30, and as of today there’s one set up and running on the 3rd floor of Dalton Hall at UPEI.

Andy Trivett, Chair of Engineering at UPEI, has been spearheading an effort to create a Fablab at the university, and in addition to acquiring equipment – 3D printers, a laser cutter/engraver, a CNC milling machine – he’s been working hard to involve the university community and the community at large in the effort, with hopes that it will become a broadly-used laboratory for making and experimenting.

The Objet30 is complex enough that the dealer – Javelin from Halifax – insists on sending over a technician for a familiarization exercise, and that’s what I attended this morning, along with a motley collection of people from the university community. 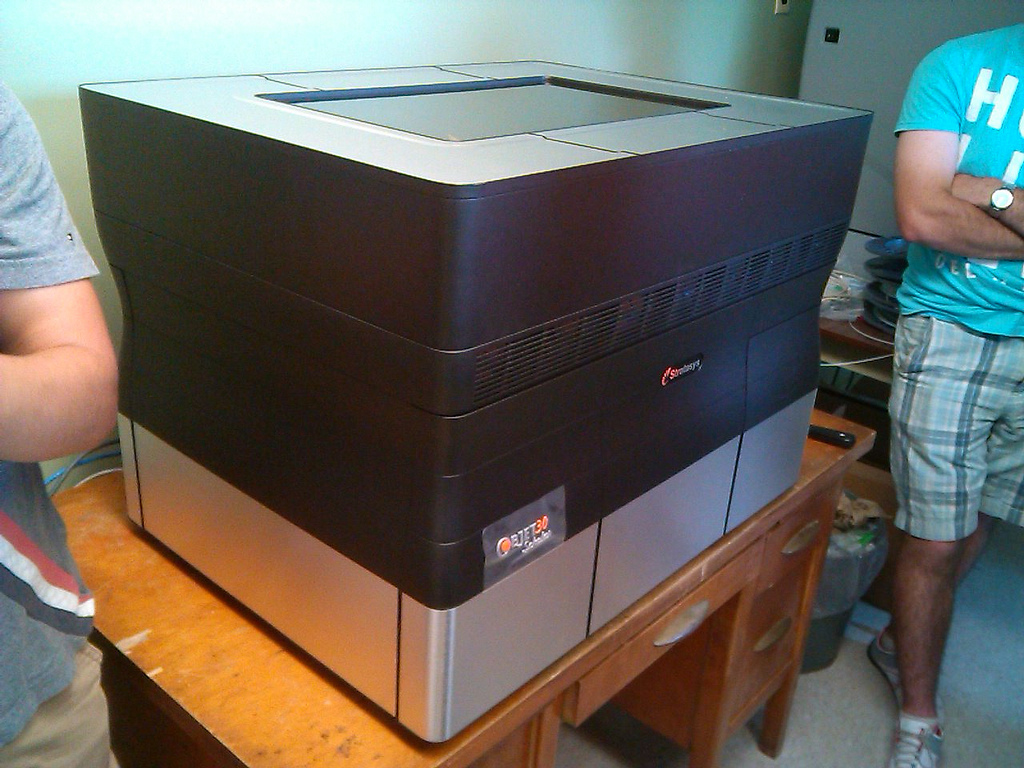 The Objet30 is quite different from the consumer 3D printers that are becoming popular (and cheap) these days: it uses (rather expensive; ballpark is $7/square inch) photo-polymer liquid to “print” in much the same way an inkjet printer prints, albeit with a third axis to allow it to print in 3D, and with a second “support material” jet to allow it to print material that will later wash away but that can support overhangs and other complex bits.

The 3D objects that the machine can produce seem awfully impressive, and lack the “jagginess” that you might be used to if you’ve seen the projects of printers with lower resolution.

What’s unclear to me at this point is whether the cost and complexity of the Objet30 will be worth it for everyday hacking around; fortunately now that UPEI is host to (at least) three 3D printers (the Objet30 and a uPrint in the Fablab and the Ditto in Robertson Library) it’s possible to contrast and compare.

If you’re interesting in “making” and would like to participate in getting the UPEI Fablab up and running, I encourage you to drop Andy a line, he’s very approachable, very committed to this not being a “university only” lab, and a man full of advice and eager to try new projects to boot.