A few weeks ago, on Oliver’s birthday, we took a drive up to Georgetown to see the Spanish galleon that was in port. As we walked from the parking lot, along the wharf, to the ship, I noticed a rectangular net in the water, tethered to the wharf, about 400 square feet. I wondered what it was.

Then, last week, I noticed a similar net tethered to the end of Confederation Landing Park here in Charlottetown: 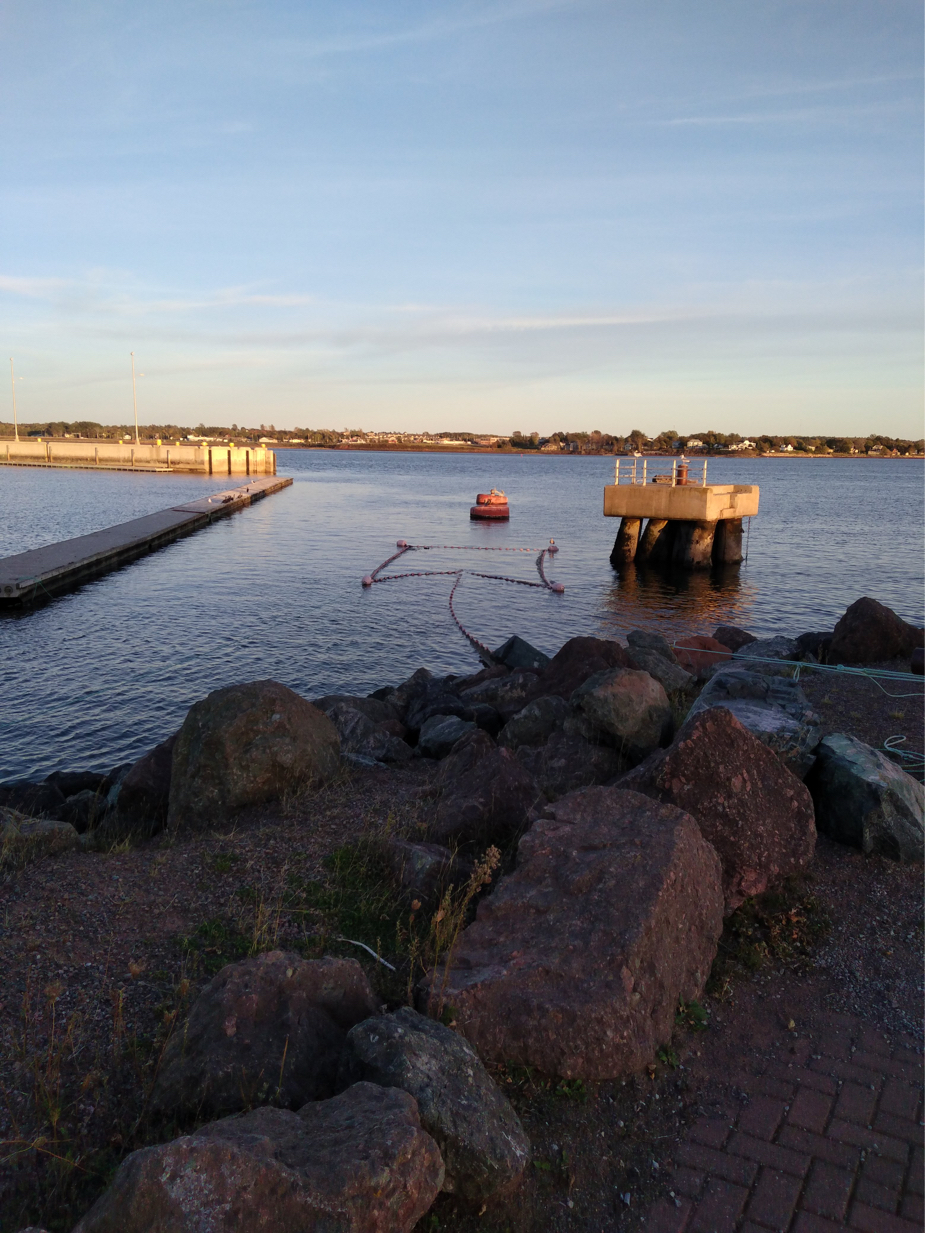 And yesterday, from the bridge of the Isaac Newton docked at the wharf in Charlottetown, I spotted another net tethered to shore just off the area where gravel is piled after being unloaded from barges:

I asked my Twitter followers what these nets might be, and received some helpful replies, including a report of similar nets in Summerside: 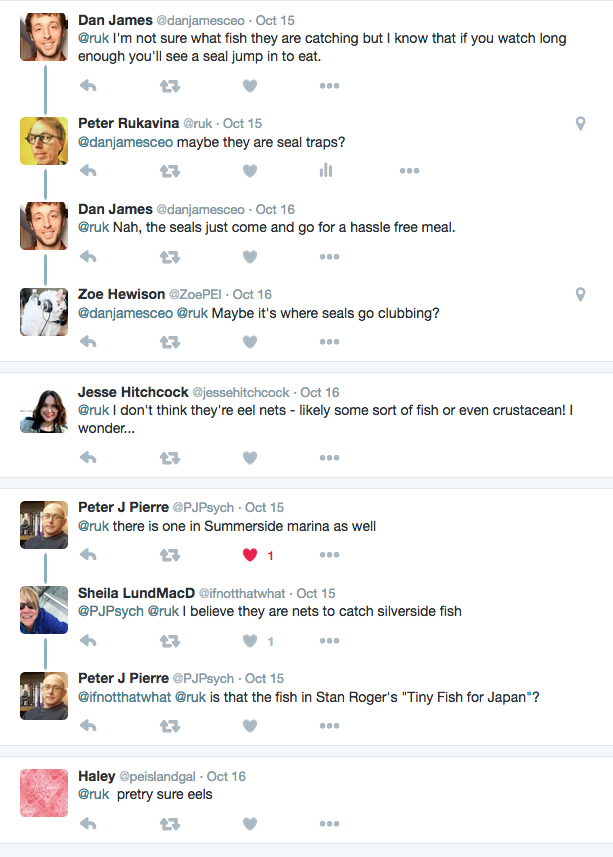 This morning I resolved to get to the bottom of this, and I phoned the main number for the Department of Fisheries and Oceans here in Charlottetown. I talked to a helpful person there who was able to confirm the theory put forward by Sheila Lund-MacDonald on Twitter that these nets are part of the commercial silverside fishery, the season for which opened on October 1, the same day I first spotted the net in Georgetown. I was given the number for the DFO person responsible for this fishery, and talking to that person allowed me to fill out the story.

Silverside is a variety of fish that, these days, is fished commercially to use as lobster bait. The fish that are caught during this fall season, running October 1 to December 31, will be frozen and used as bait during the spring lobster season. A 2009 Canadian Science Advisory Secretariat paper describes the species:

The Atlantic silverside (Menidia menidia Linnaeus 1766), is a small-bodied (length < 12 cm), short-lived fish which is widely distributed in brackish and salt waters from the Gulf of St. Lawrence to Florida. In its distribution, some Atlantic silversides overwinter in offshore waters but in the Gulf of St. Lawrence, at least some also overwinter under the ice in bays and estuaries. Silversides are commonly reported to form a substantial portion of the fish community in the coastal habitats they occupy including the bays and estuaries of the southern Gulf of St. Lawrence.

Silversides feed on small planktonic and benthic organisms. Fish-eating birds and fish in estuaries and coastal waters prey on silversides.

The paper goes on to describe the state of the silverside fishery on Prince Edward Island at that point:

In Canada, the silverside fishery is concentrated in Prince Edward Island with low and occasional landings reported from Quebec. The Canadian reported landings between 2000 and 2008 varied between 200 and 650 t, and represented 98% of the total commercial fishery landings for the species in eastern North America.

The PEI silverside fishery showed peak reported landings in the late 1970s, was low in the 1980s and the early 1990s, and began a sharply rising trend in the mid-1990s (Figure 2). The increase in landings coincides with an increased number of licences and the elimination of individual licence quotas. Silverside fisheries are concentrated in Kings County in eastern PEI with 86.6% of total landings since 1973. At the present time, an unknown but likely major part of silverside harvest may be kept for the fisher’s own use, or sold to other fishers. In either case, the harvest may be unregistered in the statistics system.

The modern silverside fishery began in PEI in 1973, first with seines, and in the following year, with traps. This fishery primarily supplied a Japanese food market, but sales subsequently shifted to the U.S., where fish were used as food for birds in zoos, and as angling bait. In the mid 1990s, the PEI silverside market largely shifted to supplying bait in the local lobster fishery. Prior to this change, the market was intolerant of sticklebacks mixed as bycatch with silversides, so trap catches were often released because the catch could not be sold. With the increased demand for the bait market, tolerance of stickleback bycatch increased, so trap releases due to excessive stickleback bycatch became less frequent.

And this 2000 fisheries management plan for the species contains an illustration of the fish:

It seems the fishery can be lucrative, given the $22,000 price for a couple of licenses back in 2012 in this UsedPEI.com ad:

Here's a public GIS map showing all the berths around PEI: http://www.arcgis.com/home/webmap/viewer.html?webmap=e13940ad985841cebd2...

Cool; thanks for that. What was your data source?

I didn't put the map online myself, but the data source is DFO. Search DFO PEI on Arcgis.com, we have several maps that are updated frequently for the public.