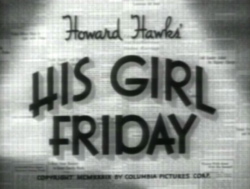 I borrowed a DVD of the 1940 Howard Hawks film His Girl Friday from the Confederation Centre Public Library earlier in the week.

I was curious to find that the library’s version came from a company called “Digiview Productions,” and I was prompted to wonder where this company got the rights to the film (if indeed it did), and what the copyright status of the film is.

Looking Amazon.com reveals 12 versions of a DVD of the movie, from companies like:

All of these companies, from the look of their websites, appear to deal exclusively in old movies. It looks like there’s also an “official” version on DVD from Sony Pictures, the corporate ancestor of Columbia Pictures, which produced the film originally (the Sony version of the DVD has a lot of material that the Digiview version doesn’t have, including commentary, trailers, and subtitles; the Digiview version just contains the film itself and promotions for other Digiview products).

A search of the U.S. Copyright Office doesn’t show a copyright registration for the film. The Duration of Copyright page from the Copyright Office appears to say that copyright for works created before 1978 for which copyright hasn’t been renewed lasts for 28 years, which would mean that His Girl Friday had a copyright that expired in 1968.

All of which leads me to think that His Girl Friday is “in the public domain,” something that is also suggested here and here. Which, of course, prompts me to some additional questions:

I’m also wondering about this notice at the beginning of the DVD: 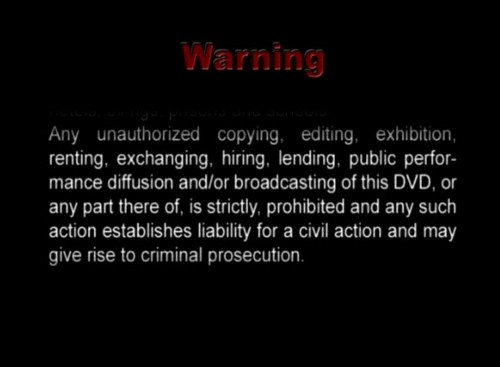 How can the distributor claim copyright on something they don’t own?

If any work is in the public domain you can put it on your website whether it is Shakespeare or a 78 recording or an early talkie.

Is there a difference, Alan, between the “content” and the “medium” the content came on in this regard? In other words, does it matter where I got the content from — the public library, a bookstore, recorded with a video camera in a movie theatre, etc.?

A work is described in our Copyright Act under various definitions categorizing the different sorts of media. “Cinematographic work” is defined to include any work expressed by any process analogous to cinematography, whether or not accompanied by a soundtrack. Because of the word “analogous” this is a pretty open definition. Section 5(1)(a) of the Act then states that…”copyright shall subsist in Canada, for the term hereinafter mentioned, in every original literary, dramatic, musical and artistic work if in the case of any work, whether published or unpublished, including a cinematographic work, the author was, at the date of the making of the work, a citizen or subject of, or a person ordinarily resident in, a treaty country”.

So the copyright arises by the making of a statement of content in a medium in a country covered by a treaty. And it is the original statement and, for movies, I think it lasts for 50 years in Canada. Other countries may have other life spans. But during that span those rights can then be treated like a commodity and contracted out through the hosts of other media and/or separated by jusrisdiction as long as you are in that timeframe that the copyright exists. [A clear example of this is in the front of Penguin books where they state they are not for sale in the US. Someone else owns that right.] To put a work into those oter new media, you still have to deal with the author or someone who the author sold the rights to. Just by highjacking the content and putting in a new medium you will not gain an ownership interest.

Once you are past that date, however [though exceptions and extensions are often made] it is no longer a commodity and it is a free for all of a sorts and I would think your libraries would start to be able to create their own editions of “great works of video”.

If I was to use parts of this movie in a new movie I created, would I be able to do that without copyright violation? For example if it was playing in the background of a scene, or I actually spliced segments of it into my new movie?

If something is passed copyright it is a free for all. You may have to identify the source as there is the moral issue of plagerism. There are, however, extensions of copyright that differ in each jursidiction which have to be take into account. I think some of the early rock and roll may be hitting the end of the protected time limit in Europe for example. It will be interesting when the copyright limits on some software start rolling over.

It is difficult to say that this particular film is entirely clear of ownership interest in the way that Chaucer or Dickens is but the kind of search Peter referenced above is part of that search. You have to recall, however, that copyright arises by the act of creating and not registration (unlike both patent and trademark) so just because it is not registered does not mean it is not covered by copyright. Also, there is a wacky provision about who has ownership after the author dies that the LM Montgomery heirs have been fighting. But sooner or later the right to have a property interest goes.

The people at archive.org would be interested in a copy of the film if it is past its copyright. They have quite a few old movies online already, incluing the original Night of the Living Dead

I had a quick look at that screen shot and, unless there was other content to the statement, it does not actually talk about breach of copyright only unauthorized use. Once a work is past the copyright, everything is more or less authorized. Maybe it is a phoney legal warning.

What people of unverified identities and indeterminate credentials post on a discussion board in reply to casual representations by yourself should not be relied upon for legal advice. ‘Course, you’ve done your due dilligence, is my professional opinion.

Quite so and there is a load of qualifications in what I have written that would distinguish this from legal advice but that is certainly the message. It is an interesting question that further research would be required upon before it could be taken as “legal advise” and none of what is posted by me is “legal advice” or to be taken as such. It is a discussion of legal theory larded with mights maybes and shoulda-woulda-couldas — the subjunctive and conditional tenses we lawyers love.

What is a legal fact is the copyright interest discontinues in time. When or if it does in a particular case is a matter of a specific analysis not set out in this thread.

I didn’t actually read attentively through anybody’s post above and wasn’t struck by anything in particular as reckless or in need of a warning label not to try this at home. I just thought the general idea of making a legal decision as Peter claims to have done on the basis of this discussion is funny and fair game for a little satire.

Fair enough but you know the best way to make a lawyer say something without getting a bill is to trigger that “no legal advice” reflex.

Now, can someone email my a mailing address for this invoice? [Shakes head] Sorry…habit.

What was the legal effect for citizen consumers of the Disney
Steamboat Willy law? Apparently the law prevented or changed
the planned public domain status of Steamboat Willy, helping
out corporate Disney.

Since even lawyers can’t possibly keep track of all of the laws,
do any judges still say that ignorance of the law is no excuse?

The concealment of law and caselaw behind disclaimers
is protectionist on behalf of the brotherhood of the bar.

Are lawyers really so afraid of running short of jobs
that they need to discourage citizens from openly
discussing laws and their application?

In this example of wanting to know what the laws are
pertaining to expected PUBLIC DOMAIN works, citizens
definately should NOT have to constantly consult with
their attorney. An unclear law in this sense is a BAD LAW.

A citizen should not have to pay ONE DIME to find out
if a given work is already public domain or is slated
to become public domain soon.

That kind of information should not be the domain of the lawyers!

Does the US Copyright office provide answers as to the
status of copyrights lapsing?

This is exactly the sort of issue Lawrence Lessig et al bring up in arguing the case for creative commons copyright.

This answers a few questions.