Last week the Canadian Cartographic Association held its annual meeting here in Charlottetown. By way of a delightful cartographic coincidence, I made the acquaintance of the program chair, Roger Wheate, from the University of Northern British Columbia, and over the weekend I got a chance to spend some time out and about with Roger.

This morning, after he returned to Prince George, Roger sent me an intriguing photo, wondering whether I knew what the symbol represented:

I knew enough to know that the starfish represented the Points East Coastal Drive and that the “56” represented point-of-interest № 56, the Forest Hills Multi-Use Trail.

But what of the “sunshine over upper case A with an line over top of it” symbol?

I searched online in vain.

I looked in the Prince Edward Island Visitors Guide for clues.

As a last resort, I sought out Hubert MacIsaac, Compliance Signage Officer with the province’s tourism department. Hubert, it turns out, is one of the friendliest public servants you’ll ever meet.

And after I emailed him Roger’s photo he quickly got back to me with this helpful signage key: 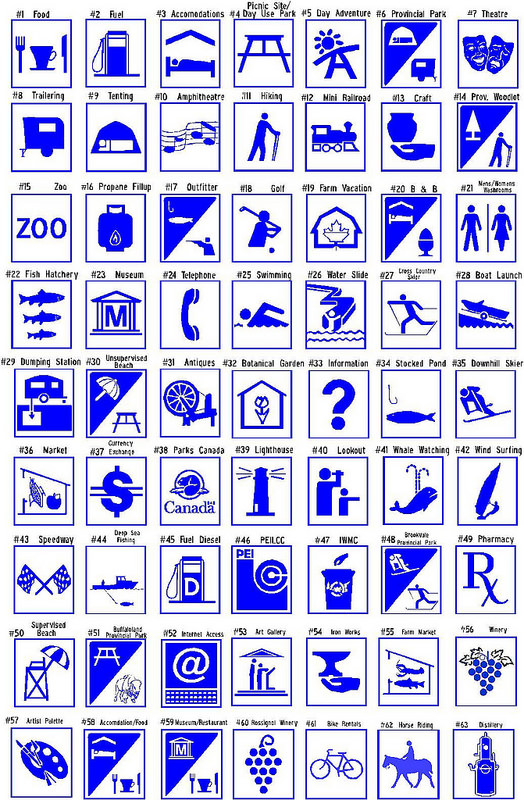 It turns out that Roger had encountered the symbol for “Day Adventure,” the symbolic representation of which confounds me: is it a happy picnic table person enjoying the sun, having an adventure in daylight?

And it is not alone in its mysterious quality.

Referencing the chart above, one wonders why the symbol for “Farm Market” (№ 55) is of a lobster and a fish trapped inside a cabin.

Or why № 32, Botanical Garden, presumably an outdoor attraction, is represented by a flower inside a house.

Would tourists from away, in search of a bottle of slivovice, know that the symbol of the stylized “PEILCC” (№ 46) means “liquor store”?

Are their really that many “Iron Works” (№ 54) on the Island that a symbol needs to be dedicated to them? And can you really hold an anvil in your hand like that?

Symbols are useful when they transcend language and allow for quicker communication than words allow; if Roger, an experienced cartographic expert, couldn’t deduce the meaning, then perhaps it’s time for a change?

It's curious that Rossignol winery would have a symbol distinct from other wineries, and likewise that downhill skiing would have a distinct symbol from Brookvale. I'm also not clear from a tourist's perspective what the distinction would be between a market and a farm market, nor what it is about a picnic table and an umbrella that should suggest an unsupervised beach.

On the plus side, the icons in their current configuration offer excellent possibilities for an island-wide scavenger hunt of some sort. Some of them must surely only exist on one or two signs at most.

What do the letters ch mean on the street signs? Most all signs have them. Thanks, Kevin