I’ve been driving a Nissan Versa for the past 5 days – I rented it from Hertz at Boston’s Logan Airport when I arrived in New England on Wednesday. It’s a nice little car – dead basic minimal in terms of features, but nice nonetheless – with one tragic flaw: every time I get out of the car it gives me a whopping electric shock.

I’m particularly averse to electric shocks of any sort since my nerve conduction study back in October, and it had reached the point last night, after a day with many stops, where I was ready to admit that the car was doing this to me on purpose, perhaps as payback for some long-forgotten slight against the several Datsuns and Nissans I’ve owned over the year (there was that blue 1978 Datsun 510 that I abandoned on the side of the road after a nicer green 1978 Datsun 510 fell into my lap).

In frustration I turned to Twitter for help and my friend Morgan in Sweden came through with something that, while not a solution to the larger issue, certainly mitigates the torture: 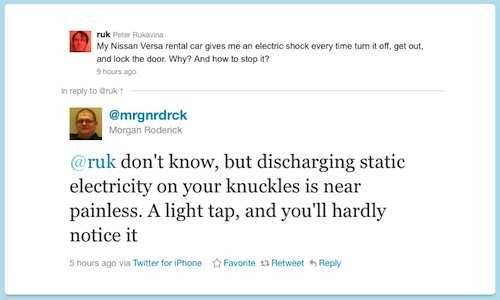 So my getting-out-of-the-car ritual now goes like this: turn off the car, open the door gingerly, get out of the car, touch the door with my knuckles and receive painless shock, proceed.

The car still bears a grudge, obviously, but at least I’ve taken the edge off its reign of terror.

I always close car doors via the glass, for this very reason.

Peter…I also have this problem…got to the point where I would wince before touching the handle (camry tho’ & generally only in winter. Someone suggested I touch first with my elbow to absorb shock — looks pretty OCD, but it works . I am curious about this though… Also sometime happens with shopping carts… Is it footwear? Is it our magnetic personalities :)

Also, to eliminate any shock while _exiting_ the car, make sure you’re holding on to part of the steel door frame the whole time you’re exiting. Any static charge built up as you slide out will be drained from you instantly, so there’s never any charge difference between you and the car.

I also agree with the knuckle idea. I have to do that quite a bit here at the office before opening doors here.

Perhaps I can get into this groove with my metal keyboard, which has opted to shock me many times.

The cursing makes me hoarse.

I think the source of the electricity is from the tires, friction generates the static electricity build up. You may have noticed some vehicles have a little cord dangling to the ground to drain this, but inevitably the little cord wears off.

I think you could use your key to discharge the shock pain free.

Do you wear a lot of polyester clothes? LOL

This was a good suggestion to, and it proved useful. Thanks.