A couple of years ago the “sit-stand” (or simply “standing”) desk wind blew through silverorange, and, prompted by their experiments (and by their testimony that their emergency room doctor clients said, in essence, “you’re going to die if you sit all the time,” or something to that effect), along with some advice from my capable ergonomics consultant, Marie Brine, I decided to investigate for myself.

My first go was to order a Varidesk, which appealed to me because it was easy to flip back and forth from sitting to standing, because I could just plop it on top of my existing desk, and because it was relatively inexpensive compared to other options ($420 with shipping from Fitterfirst in Calgary). While it was everything it promised to be, it suffered from one insurmountable problem for me: I couldn’t adjust it so that it was both tall enough in the “standing” position and at the right height in the “sitting position.”  I could have hacked it to work, but I decided not to, reasoning that it made more sense to find a solution that actually worked for me without the need to improvise. Here’s what the Varidesk looked like in my office, before I returned it: 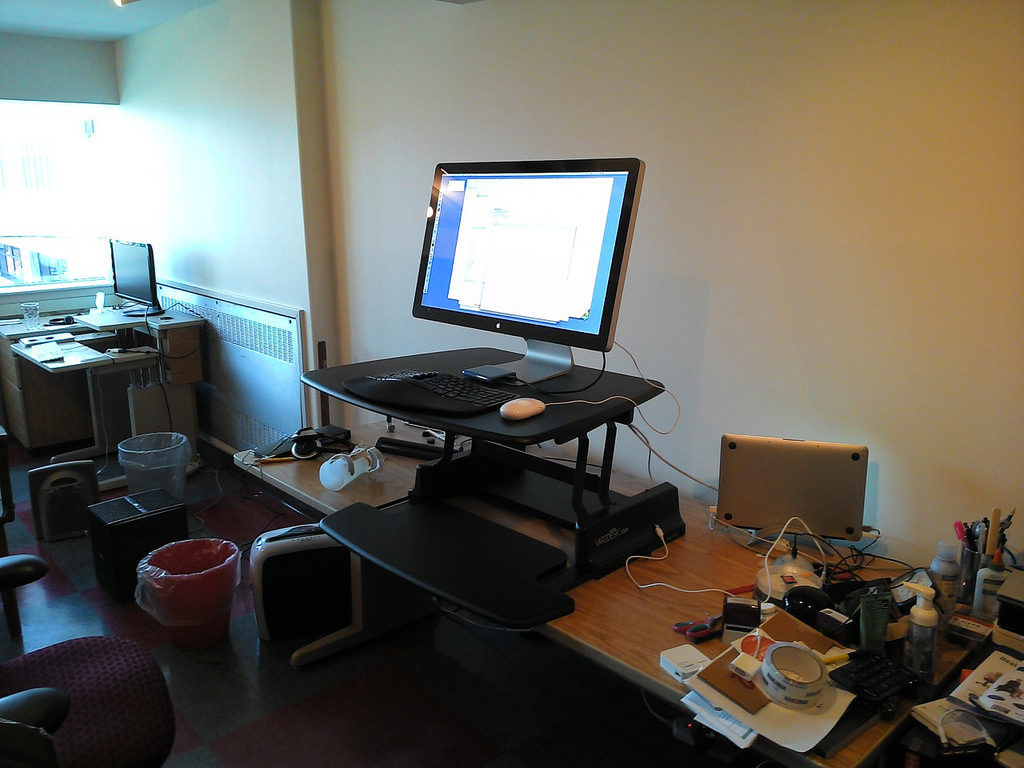 At this point – over a year ago – inertia took over, and I set the standing desk idea aside, fully expecting to return to it any day now.

And then the days and weeks and months passed. Until this spring, when a flare up of some work-related physiotherapy issues (the same issues that had spurred me to action last year) had me revisit the problem.

I’d been dropping in on The Best Standing Desks article at The Wirecutter every month or two over the last year and recently their recommendation switched to the Jarvis from Ergo Depot, and after reading and watching reviews of this option, it seemed like it would work well for me: they only sell the motorized frame to Canadians, without a tabletop, but I was able to confirm with their customer service people that the frame would work with my existing desk (a federal government surplus desk I bought in 2003 from The Clearance Centre in Summerside). This tabletop measures 78” by 30” (198 cm by 76 cm) and it was already strapped to a mechanism that allowed it to be adjusted up and down (albeit not as high as “standing” height), so all I would need to do is to remove it from this contraption and add the Jarvis base.

I placed the order on Ergodepot’s website on April 19. I ordered the base along with a Humanscale M8 flat panel monitor arm to allow me to have different positions for my Apple Thunderbolt 27” display for sitting and for standing. The Jarvis frame was $519 US, the monitor arm was $379 US and shipping was $184 US for a total of $1082 US.

Here’s what it looked like freshly-unpacked from its box: 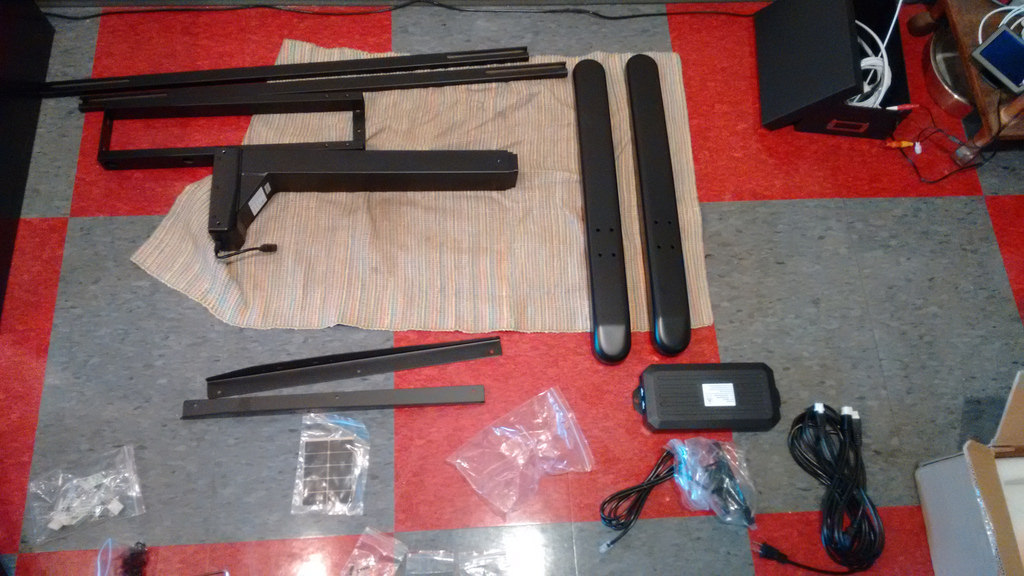 It took me about 2 hours to take apart the old desk, to assemble the parts of the Jarvis frame and to mount the old tabletop to the frame. My only complaint about the process was that the printed manual included with the frame was sized for 25 year old eyes and I have 49 year old eyes, so I had to take photos and blow them up on my phone to see the details. But the instructions, once I could see them, were straightforward and the frame came together without issue.

Here’s what it looks like in the “standing” position (44.4 inches for me): 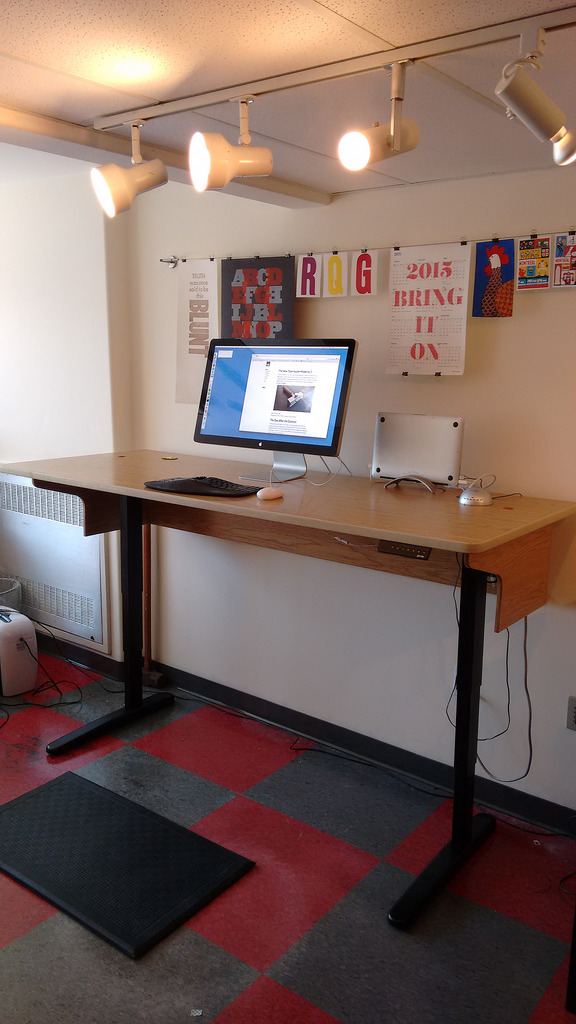 And here’s the “sitting” position: 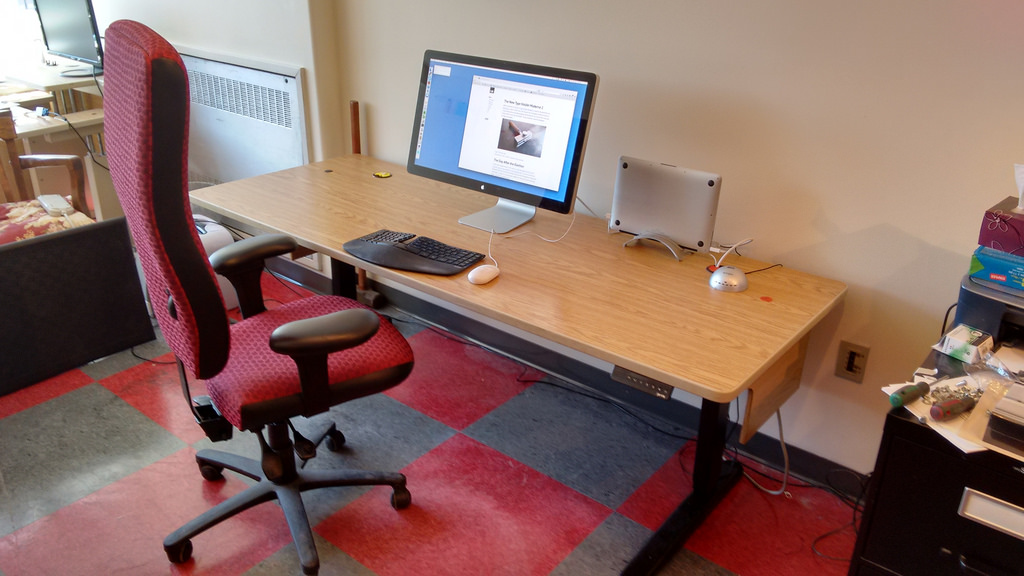 And here’s a little video of the transition from sitting to standing and back (note that I paid $20 extra for the digital controls, which several reviewers recommended; they have 4 memory positions):

The desk has only been assembled and operating for a few hours now, so I’ll follow up later with a more detailed review. I did, however, write half this blog post while sitting and half while standing, and I enjoyed the contrast. More to follow.

Cool. Reading post from the standing position of my desk. Really great to have a choice. "Sitting is the new smoking."

We’re going to have to start a user group.

Any follow-up on how this desk has held up? Also, do you remember how much additional fees you had to pay upon delivery for import/taxes to Canada?

The desk has held up well, but I’ve also hard ever used it in stand-up mode. Turns out that learning to work while standing requires determination that I cannot muster, at least now without more flex in my schedule. So it’s something I’ve been putting off for far too long.