Ten years ago this month, Wendy MacDonald approached me after a Prince Street Home and School meeting to see if I’d be willing to put my name forward for the position of Regional Director for the Charlottetown area on the provincial board of the PEI Home and School Federation.

At the time Wendy asked, I was only vaguely familiar with the fact that there was a provincial federation, and I knew little about what it did or why it did it. But Wendy is a formidable inviter, and as I was already in a position to know of the good works of Home and School at a local level, I agreed to let my name stand.

A month later, at the Annual General Meeting of the Federation, I was elected to the position, and began what ultimately became a 10 year run, in various positions, on the board (from regional director, I became Secretary, then Vice-President, then President, and, for the past two years, Past-President).

My work with Home and School went completely against type: I have had lifelong doubts about the approach we take to public education, a general discomfort working in groups, and negligible social skills. Like many people, I’d carried around a stereotypical view of “PTA parents” as overbearing joiners, a stereotype constantly stoked by the popular culture.

But, somehow, I fit right in. I found my peers on the provincial board to be interesting, engaged, smart parents and guardians with a desire to improve not only the education of their  children, but the education of all children (the mission of the Federation focuses on “the total well-being of all youth”). I have never left one of the 60-odd provincial board meetings I’ve attended over a decade feeling anything but energized. And I believe that, working as a board to support our members in 56 schools across PEI, we’ve achieved significant things together.

Last night I attended my final monthly meeting as a board member: my term as Past-President runs out at our AGM on April 14, 2018. Fittingly, the last meeting was a particularly rollicking one, where we hashed out the details of our AGM, and discussed the best way to feed our members’ oft-stated desire for more opportunities to engage with each other (as opposed to listening to speakers) and our desire to breath new life into our longstanding policy resolutions process. Over three hours of discussion we came up with a solid plan, and I’m excited to see it spring to life in April.

Board member for the Colonel Gray family of schools Sandy Nicholson snapped this photo of a slice of our group last night just before we adjourned (Sandy too is coming to the end of her term on the provincial board; I wouldn’t be surprised to see her return in the future, though!). 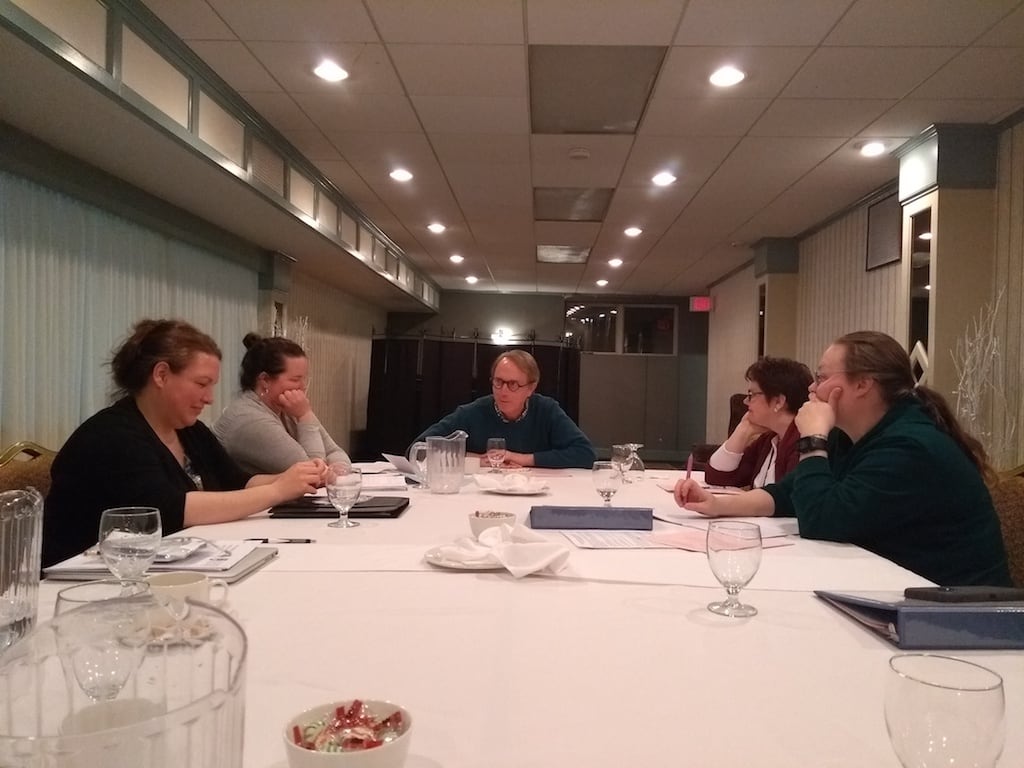