Since the launch of IslandNewspapers.ca, the Robertson Library project to digitize the archives of The Guardian newspaper, I’ve been reading the 100-years-ago-today paper every day (you can do this yourself, if you like, by following this Tumblog).

It’s been a bracing time to be reading the headlines these last few years, as World War One has been raging in Europe, and barely a day goes by without some report of a sanguinary battle. If nothing else this daily read has given me a palpable sense of how long the war went on, and how, in the middle of it, it was frequently thought to be almost over.

It’s not every day I pick up the paper, however, and read of an event that involved my family directly; this morning, though, came the headline “Disastrous Fires in North Ontario” with the subhead “Eighty people known to have perished. Towns of Nushka, Timmons, Cochrane and Matheson wiped out. Many bodies recovered”: 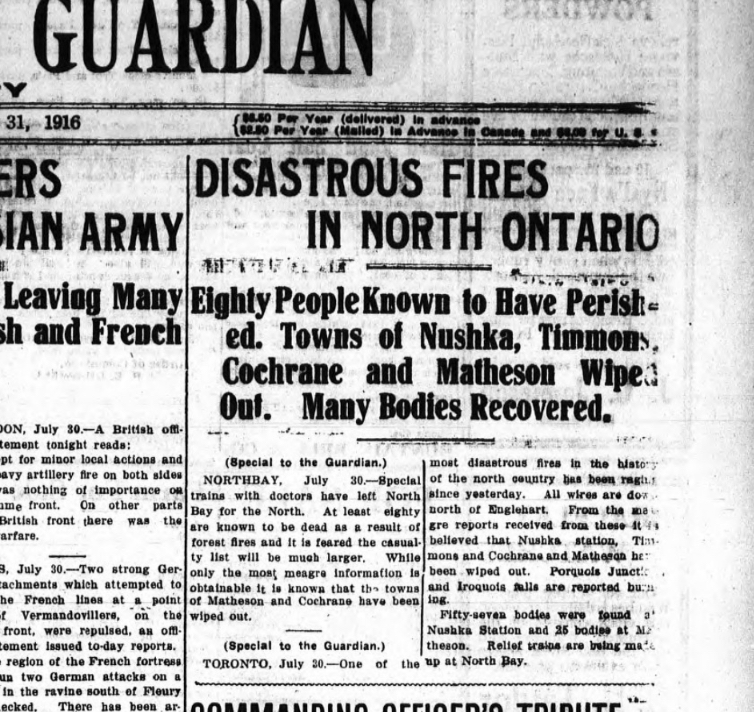 My great-grandparents, Edgar and Emmeline Caswell, moved to Cochrane in 1909, six years before this fire. Here’s how the Northland Post told the story of this move in Edgar’s obituary:

It was at the beginning of 1909 that Ed reached Cochrane, his family following in the spring. He carried on as a builder and contractor, one of his first contracts being for the foundation of the new station. Then he started a grocery store, which Mrs. Caswell carried on for a time while her husband worked out of town on railway construction. Following an attack of typhoid, however, he returned to town, sold the store, and entered the service of  the municipality in May, 1913. During the next thirty years he filled practically every position on the town staff outside the offices. He was town foreman and building inspector for many years, and at one time even served as acting chief of police.

First came the fire of 1910. Edgar’s biographer, Dick Bourgeois-Doyle, tells the story of an August night that summer:

Ed Caswell was awakened in the middle of the night by the sound of gunfire in the streets near his home. The bank manager had emptied his shotgun into the sky when he realized that people were not being roused by the engine whistles and all the yelling. Fire had broken out for unknown reasons along the town centre. For the next three hours, Ed and his neighbours ran, sweated, and strained to kill the fires in heroic – but nearly hopeless – bucket brigades, ultimately saving only one house on the two main streets.

Then, in the summer of 1911, just a year later, the Great Porcupine Fire, also reported in The Guardian, struck the town: 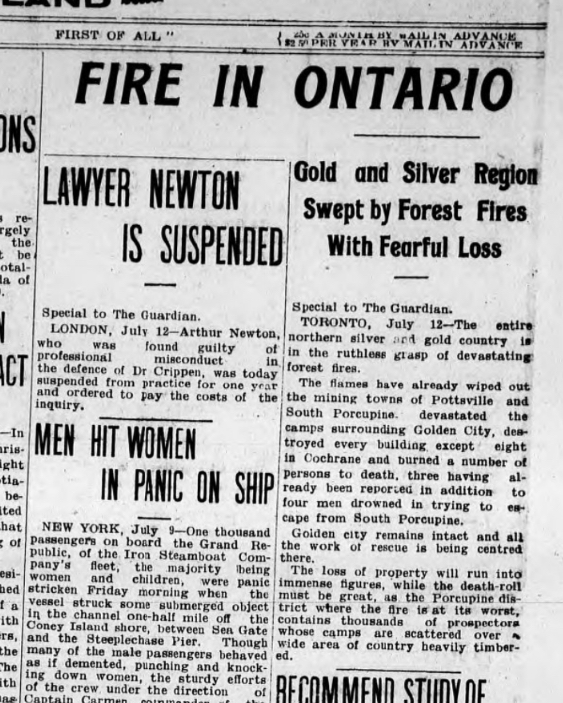 While that fire devastated the town of Cochrane, it was a fire earlier the same week that had a even more devastating effect on Edgar and Emmeline and their children, for a fire that broke out in a 4th avenue hotel, on the same side of the street as their house and general store, consumed the block. Edgar’s obituary reports that his family’s “possessions were wiped out in the 1911 conflagration.” In his biography of Edgar, Dick Bourgeois-Doyle elaborates:

The family lost everything save a few personal effects, and Ed and his wife had some difficult decisions. With this personal tragedy, they had no choice but to recognize the perils of life in the northland and the cost of the opportunity it offered. As they sifted through the scorched residue of their business and their home, they had to focus on the short term, finding shelter and food for the children.

Only five days later the Great Porcupine Fire bore down on the town. Many residents sought refuge in Lake Commando, in the heart of the town. Others, including Emmeline and their children, were loaded into boxcars and shuttled east on the railway beyond the reach of the fire. Because of the smaller fire that took their home the week earlier, the family had gathered what personal possessions they had into a trunk that made it out of town that day; as a result, rendering its contents some of the only records of Cochrane’s early history.

Although 3,000-odd residents were wiped out by the 1911 fire, no lives were lost in Cochrane proper, and the town set to rebuild itself.

After the fire, already Town Foreman, Edgar had the additional duty of Fire Chief of Cochrane added to his duties, aided in the position by Emmeline, dubbed Cochrane’s “first firelady,”

The town never burned to the ground again. And, indeed, became a model community for its fire safety and firefighting practices.

Here is how the Northland Post reported my great-grandparents’ retirement from firefighting in 1946, thirty-three years after entering the service of the town:

Reminiscing of pioneer days gone by were members of Cochrane’s Volunteer Fire Brigade, their families and friends when they gathered at a banquet in the Stevens Hotel last week to pay tribute to Fire Chief Ed Caswell and Mrs. Caswell on the eve of the former’s retirement.

In appreciation for thirty-three years of public service the couple were presented with a thirty-four piece set of Rogers Brothers Silver.

The retiring Fire Chief was main speaker for the evening.

“It has been one of the greatest pleasures and greatest privileges in my life,” said Mr. Caswell, “to have been chief of Cochrane’s Volunteer Fire Brigade.”

Continuing he said that the Cochrane Brigade is the pioneer brigade in the North and was the first organized (1911) north of Englehart. Mr. Caswell complimented the ‘women members’ of the brigade for their part in helping to protect Cochrane from fires. He attributed to them much of the success achieved in establishing the fire-conscious spirit among the people of Cochrane today.

His own wife has justly earned the title of Cochrane’s First Firelady. Many times firemen have returned from fighting a fire to find Mrs. Caswell with a tasty lunch and stimulating hot coffee ready for them at the Firehall.

His parting words were to brigade members: “I am retiring tonight without a regret in the world. Although I may be getting old and dropping off, my heart is still in the work as much as ever,  and I’ll continue to stand by the firemen to help them protect the town of Cochrane from fire.”

In a tragic irony that still brings tears to my eyes when I think of it, barely a month later my great-grandmother was burned to death when her housecoat touched an electric fireplace. Here’s Bourgeois-Doyle’s description of her death:

Frail and ill, Emeline Caswell was often struggling to stay warm. The small electric heater in the living room seemed particularly ineffective against the chill of this cold winter’s day, and she leaned over it to adjust the heat. Her dropping robe brushed the elements in the heater and burst into flames so quickly and widely that she was overcome by the searing force of the heat and the shock. Ed’s beloved wife was knocked to the floor wrenching in pain.

When Ed and the others came back to the apartment hours later, they found her scarcely conscious and barely alive, suffering extensive and gruesome burns. Cochrane in 1946 had much better medical services than it did after the forest fires decades earlier, and these services included those of the well-equipped Lady Minto Hospital. Yet despite every effort to comfort and save the fire chief’s seventy-three-year-old wife, Emeline lingered horribly for eighteen days before finally succumbing to the burns and finding an end to the ghastly suffering.

Here’s how her death was reported in The Ottawa Journal. 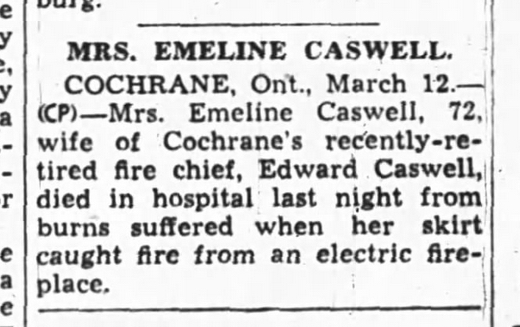 Edgar lived another 4 year, dying from stroke in 1950. One can only imagine the grief that lurked in him for those last years of his life.

I’m so proud of the role my great-grandparents – and their children, and their children’s children – played in the development of Northern Ontario. Not only were they challenged by fire, but by two world wars, by influenza, by typhoid, and by the simply fact of carving a new settlement out of the bush.

And I’m both happy, and chastened, to be reminded of this by an item in The Guardian 100 years on.

Thanks for citing my book on Ed and putting this together. As someone who aspires to be a better writer, I now realize that I could have left out words like "ghastly" and "gruesome" as the events and facts speak for themselves.

Incidentally, 2016 is the 200th anniversary of the arrival of that first Caswell ancestor to Canada - it should have compelled a family reunion - so at least share my best with your mom, dad, and kin.