A couple of weeks ago I got a signal from my friend Josh:

I’m putting on a concert of ambient/drone/noise music here at the house on december 13 at 8:00. also featuring some other sound-series-affiliated performers. consider yourself invited.

“Did you hear that new Stara Rzeka track!? What a lit dope zizzle it mingled,” they might exclaim. How would I reply?

But I have been counseling Oliver to embrace divergence, so I must dive in where I fear to tread. Thus last night around eight I walked through Josh’s front door and into a parallel universe of sound. 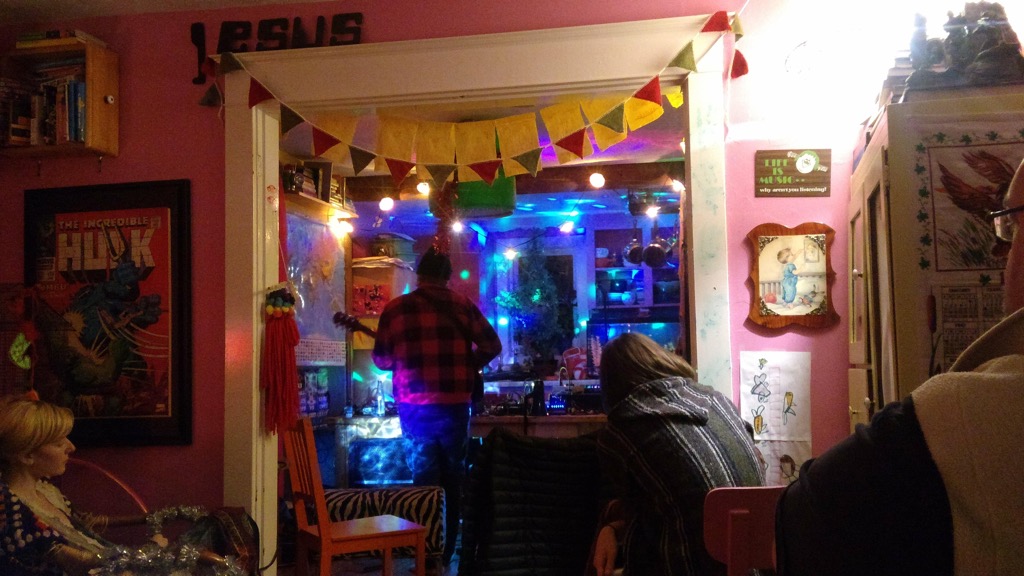 First up on the playbill was Ryan Kirkpatrick. Ryan produced a set that was of the “please make this stop because I feel like I am being tortured and I would give anything to make this stop please won’t it end I think my hearing will permanently be damaged by this” music. Which is not a criticism, despite appearance to the contrary; it was a transcendent experience to live through, and Ryan has a detached earnestness to his playing that I connected with. If I was going to be hit over the head with a wall of sound, Ryan was the man for the job.

Although Chris Vessey helpfully recorded later sets, Ryan didn’t get recorded; as such I only have a clip, but it gives you a good taste.

Next up was host Josh Zapf and Jeff Smith, playing as Meditation Onslaught Starlet. There was some degree of total-immersion-in-a-submersible-of-sound to their set, but with more layers to it than Ryan, in part because Josh and Jeff played off each other and in part because I heard raw and powerful sounds wail out of Josh that caught me unaware.

I heard echos of Supertramp’s Fool’s Overture, but that might be my attempt to connect the otherworldly to the familiar.

Regardless of what it was and where it came from, I loved it, and was kept busy conjuring up film projects for which they could provide the soundtrack.

The revelation of the night for me was the immensely talented Jasmine Michel, who finished out the night and whose playing left me with a “this person lives among us and I didn’t know?!” feeling. Hers was a much more restrained kind of noise–”music is just organized noise,” as she said leading off–and listening to the recordings on repeat today I keep hearing subtleties that I missed last night.

There’s bluegrass in there. And Penguin Cafe Orchestra and Jóhann Jóhannsson. And bits of lichen and shards of glass. There is more of her music here; I would gladly take out a lifetime subscription to her oeuvre.

I am happy that Josh extended the invite, happy that I braved the waters, and relieved that Stara Rzeka didn’t come up once. If you have a chance to join this group of talents and their peers sometime for similar events, I highly recommend it.

Thank you to Chris Vessey for the recordings.

Thank you so much for your kind words! "Bits of lichen and shards of glass" is the only way I ever want to describe my music from now on!