As reported in this space last month, after more than 10 years in operation Formosa Tea House in Charlottetown is closing.

But, as it turns out, it’s not really closing at all, simply reinvented itself under new stewardship.

If you’ve been around the neighbourhood over the past few weeks you’ve probably noticed the new paint job and the bevy of volunteers swarming over the building at 186 Prince Street. I was as curious as the next guy as to what was going on, and while I heard suggestions of the involvement of The Great Enlightenment Buddhist Academy in its re-imagining, I didn’t really know what this would mean.

Early this week, though, I was sent word through an intermediary that my presence was requested at 186 Prince on July 7 at 7:00 p.m. (7/7 at 7) for either a closing ceremony or an opening ceremony, or perhaps both. I wasn’t quite sure what to expect, but as a longtime member of the Formosa Tea House family, I felt duty-bound to attend.

On arrival I was greeted by both Mr. Lu, the new owner of the soon-to-be-named Splendid Essence, and by my old friend Chien-Ming Yeh founder, with his wife Fen, of the Formosa Tea House: 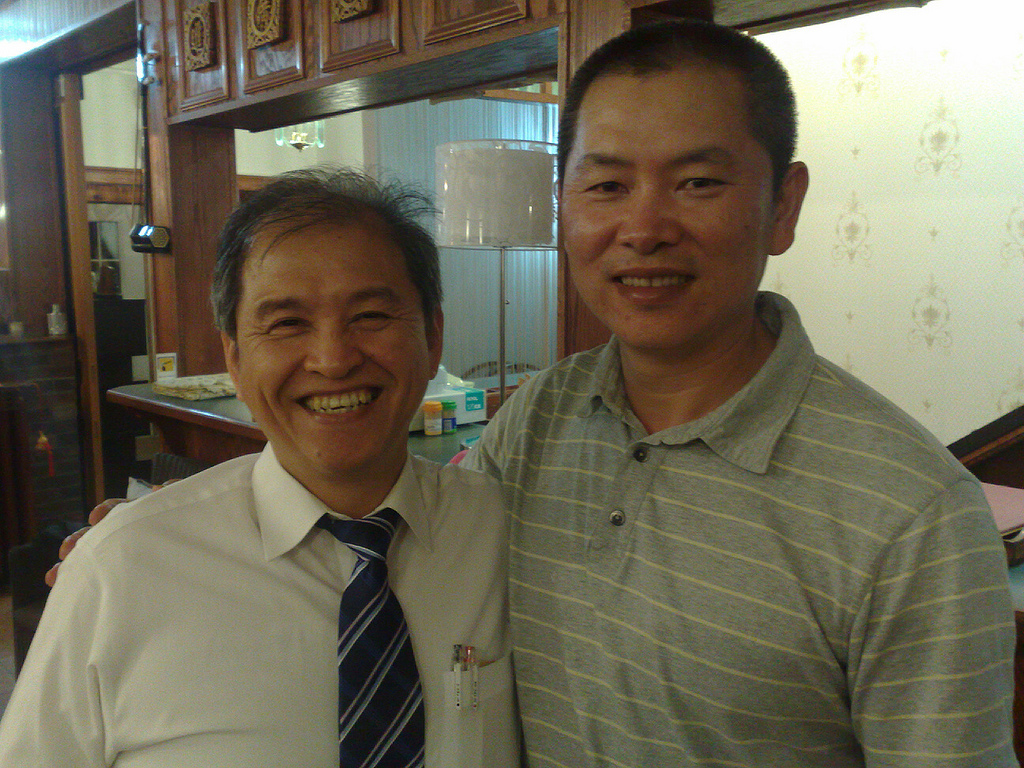 What followed was a fascinating cross-cultural three hours of food, fellowship and leaning.

And what I learned is this: in the practice of Buddhism there are, shall we say, “sub-religions” – followers of particular strands of the faith, adherents to a particular spiritual leader. In this case, the same Buddhist sect from Taiwan involved in the The Great Enlightenment Buddhist Academy and related monasteries in Montague and Little Sands has a group of lay adherents who have purchase the Formosa Tea House and will run it as Splendid Essence, evolved but following the same general “tea house” model as Chien and Fen have established. This effort appears to be a part of a broader economic and educational effort that in Taiwan involves organic farming, vegetarian food manufacturing and other endeavours.

The large crew of workers we’ve seen in recent weeks painting and renovating 186 Prince Street are a group of visitors to the Island, adherents of the faith, here volunteering their time and energy. Among those that I met last night were a retired colonel in the Taiwanese army, a computer engineer and a former graphic designer for Honda cars and motorcycles. I also met Geoffrey Yang, already here on the Island for two years and living in Stratford, who’s a sort of “real world liaison” for the monks, conducting their business affairs, and acting as assistant to Mr. Lu.

Mr. Lu is here to run the Splendid Essence; also a lay member of the sect, he has a background in organic agricultural and non-food additive manufacturing in Taiwan. His plans for the tea house include expanding its menu (while keeping the core than Chien and Fen established), and engaging in other educational and economic pursuits in the community.

This is all at once interesting, heartening and deeply, deeply weird to me. I’m very attracted to the notion of “non-capitalist enterprise,” and there’s a lot of philosophical overlap between my approach to economic matters and theirs. And it seems that if anything the special place that Formosa Tea House has had in the community will only be enhanced under this new ownership.

But I find the Buddhism angle perplexing – faith and religion of any sort are, as regular readers might recall, all a great mystery to me – and I’m not quite sure where to slot the laypeople I met last night in my everyday cast of characters: missionaries? religious people on retreat? CUSO-like volunteers? As much as I enjoyed myself last night, and was engaged by their company, there’s also a certain amount of “so this is how you win over converts through food and subtlety” paranoia in the background of my mind.  I don’t wish to ascribe ulterior motives to this group; this is simply a case of that which confuses me makes me suspicious and afraid (a solid Prince Edward Island trait if there ever was one).

All that aside, the tweaks that have been made to 186 Prince are quite nice; the old back room – the original Live from the Formosa Tea House recording studio – has been transformed entirely: 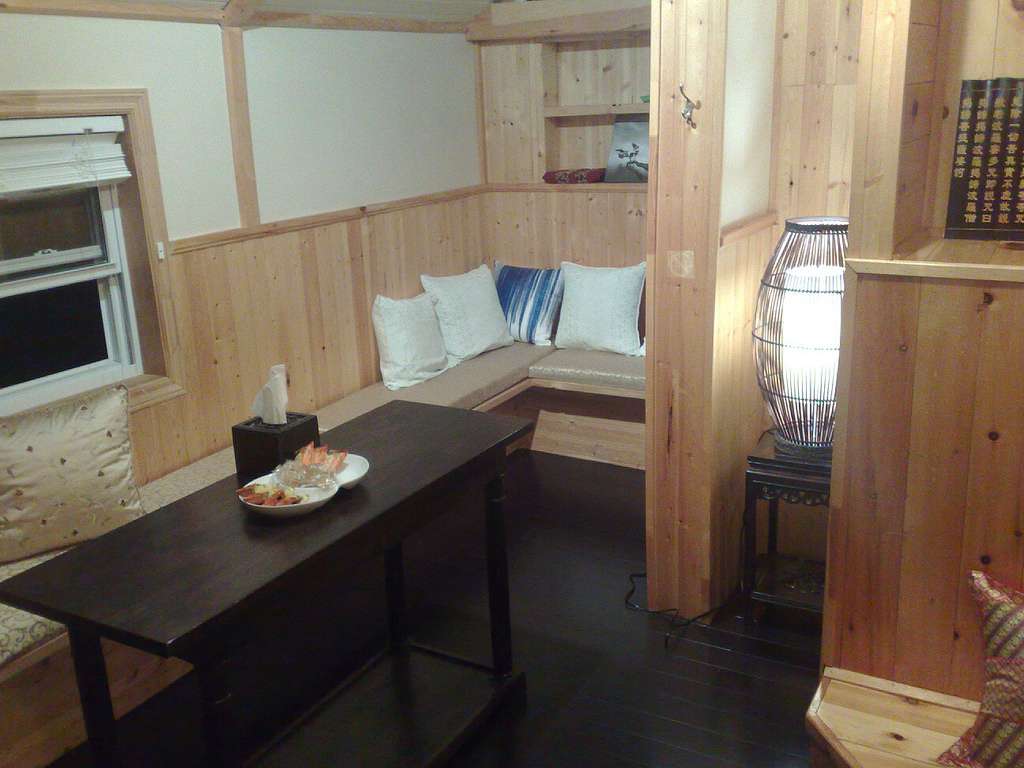 And the main room has been simplified and softened, with the booths reupholstered, pillows added, and some of the clutter removed: 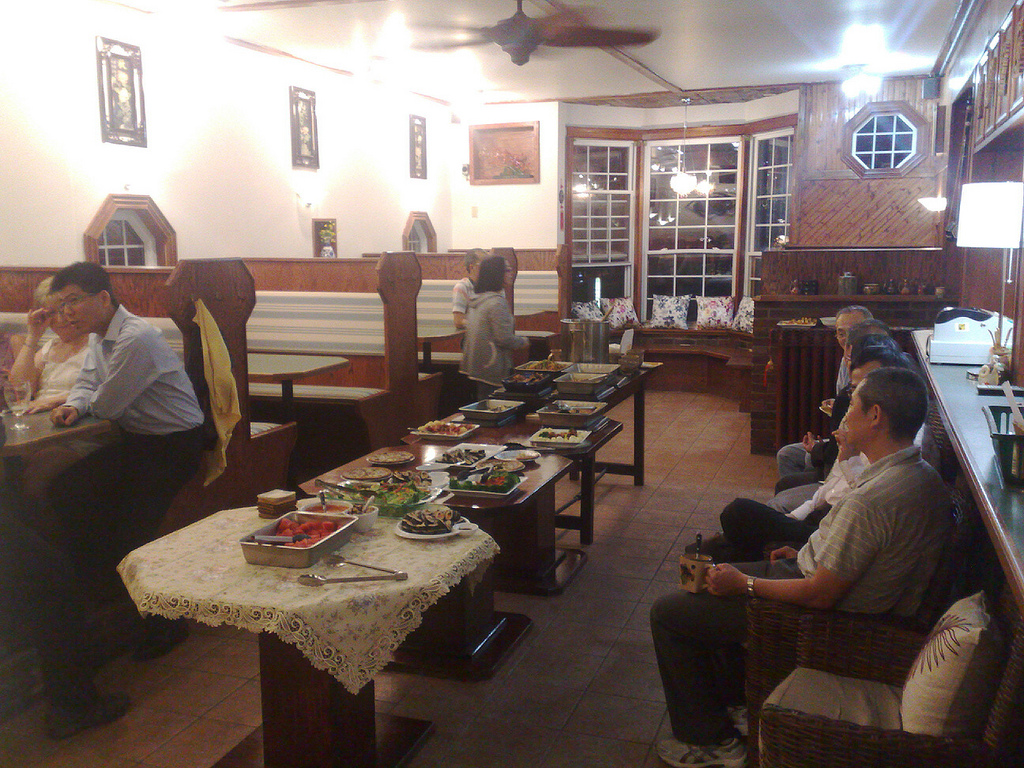 The spread they put out for we visitors – mostly Formosa regulars – was about as good as it gets in the “vegetarian buffet” world: some Formosa standbys like spring rolls and dumplings supplemented by some spicy new dishes, fresh watermelon, a very tangy soup, and some packaged desserts from the home office in Taiwan: 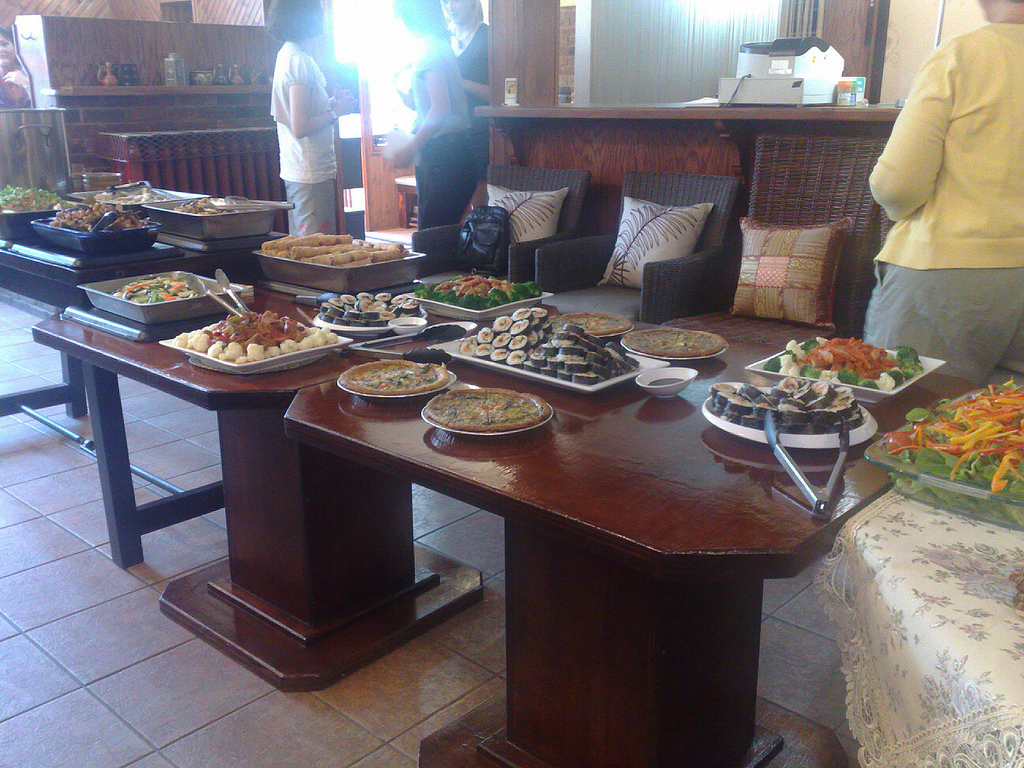 Fen will be staying around until the end of July to help the new owners with the transition; Chien left at the crack of dawn this morning for the North Sydney ferry and the drive onward to St. John’s where he and Fen will make a new life for themselves. They both seem very happy with the new path the Formosa is set on, content that they’ve left a legacy of a special and important place in Charlottetown that will stay that way.

If you’re curious about all of this, one opportunity to learn more is the Gratitude Fest this Sunday that the Great Enlightenment Buddhist Institute Society is hosting in Montague from 10:00 a.m. to 3:00 p.m. This is the Montague outpost of the group; it’s the old Lobster Shanty location for those of you that remember where that was. It’s describe as follows:

If I can find the time in my busy Sunday – I’ll be madly making last-minute preparations for my Monday departure for Berlin – I’m going to try and make it out.

I had been wondering about he activity over at Formosa! Thanks for sharing your observations and experiences of last night Peter. Safe travels.

Many would say Buddhism is neither a religion or a faith if that helps. For a discussion:

Thanks for the update— It’s hard to believe that Chien and Fen are leaving. “Formosa” always gave me an unexpected sense of comfort. There was always a sense of belonging there that I felt grateful for.

If we can safely exclude Buddhism from the grips of “religion”, then its acceptance by those who have in the past had such disdain for “religion” won’t appear to just be another huge “flip—flop”…or as just conveniently playing favorites in order to appear “trendy”.

Now that you mention it, the old-line religions could use a trendying up; where’s the wifi, juice bars and relaxation pods?

Buddhism’s as much a religion as Christianity, and probably just as varied.

Religion or non-religion aside … when does the new location open up for business. I’m in the mood for some good food & calm setting to enjoy it . :0)