As Catherine would no doubt attest, if left to my own devices and with no other cares in the world, I’d likely spend most of my time at the movies. Two or three a day. Okay, maybe just two, but just so I don’t run out of good movies. Oh, and I’m always willing to sacrifice my way through a bad movie for the opportunity to sit in an interesting theatre. How else do you explain The Avengers in České Budějovice in Czech back in 1998. (See also Four Movies, Three Days). 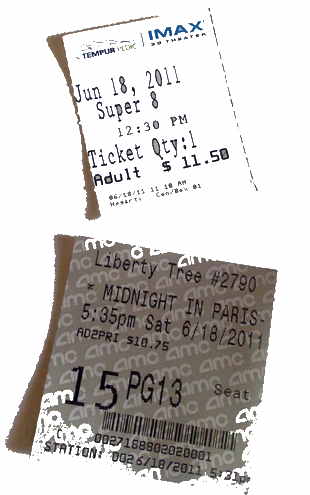 I’m spending the weekend on a furlough from Yankee here in North Andover, MA, about 30 minutes north of Boston (I usually travel down for these week-long trips over a week of weekdays, but this time circumstances necessitated a split-week). Which left me a unique opportunity, freed from responsibilities and from “we can see movies anywhere – there’s only one Milan!” protests by other family members, to go wild on the film front.

I started with Super 8, which I knew almost nothing about other than its Spielberg/Abrams provenance (enough); my proximity to the The Tempurpedic IMAX Theater at Jordan’s Furniture sealed the deal. It was, indeed, an amazing place to see a film: very comfortable – Tempurpedic! – seats, stellar sound, the usual super-giant IMAX screen. The film was the kind of well-constructed dramatic monster movie you don’t see so much – Stand By Me meets Aliens. I enjoyed it.

After a burger at Fuddruckers (along with a musical fountain and a trapeze training centre, a part of the Jordan’s “get them in the door for reasons other than needing furniture” business model; the burger was excellent) I headed up to Peabody for an Apple Store religious pilgrimage, a dose of Barnes & Noble, and then to the AMC Loews Liberty Tree Mall 20 – they like their megaplex names good and long here in New England – to see Midnight in Paris, the new Woody Allen film. I really, really enjoyed it; I’m old enough to have missed Allen’s golden era, so I don’t have a soft spot in my heart for Manhattan and Annie Hall and the like; this leaves me free to treat each new film without that nostalgic anchor, and this is Allen’s best film of the last half-dozen I’ve seen (with the stipulation that I’m a sucker for time travel movies of any sort, for any film with Owen Wilson, and for Paris).

As if two movies in a weekend weren’t enough, I’m meeting a friend at the Wilton Town Hall Theatre tomorrow afternoon for the Danish film In A Better World.

Before then I’ll spend a good chunk of Sunday at The Museum of Printing here in North Andover: it’s their Printing Arts Fair, celebrating, in part, the 139th anniversary of the Kelsey press, which is the veritable American cousin of my Adana Eight Five.

A good weekend. Back to Yankee for Monday and Tuesday, then back to Charlottetown on the late-late flight on Tuesday night. I’ll have only been on Island soil for 12 hours before I’m set to hear out on the town with Bob Gray and his wife for an Asian restaurant crawl to feed his column in The Guardian. And then Thursday afternoon it’s a demonstration of the 1890 Golding letterpress at Kwik Kopy’s open house. So a good week all-round.