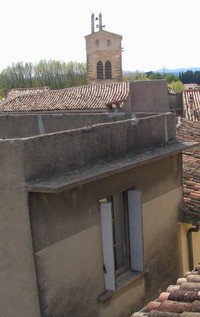 One of the advantages of having a compact small village with a tall tower (pictured here, view from our roof terrace) right in the middle is that you can mount speakers on the top of the tower and pretty much every resident is within earshot of anything you broadcast.

Hence every weekday morning here in Aniane, somewhere between 10:30 and 11:30 a.m., a little introductory bit of music beams over the rooftops, and then a very well-spoken man delivers the morning announcements.

These consist of everything from “the road to St. Guilhem is having some work done on it this afternoon” to “registration for kindergarten starts on Tuesday.” On Thursday morning we received an overview of the merchants selling at the outdoor market.

Every announcement is carefully repeated twice, which is very helpful for those of us without capacity for rapid French processing.

After the last announcement, without any fanfare or good-bye, the public address system just fades away until the next day.

Which bring me to the other village-wide broadcast issue, and that is the chiming of the clock on the hour.

Or rather, the chimings, as there are two sets.

And they’re not on the hour: the first is somewhere around 8 minutes to the hour, the second follows a couple of minutes later. Each chimes out the hour-to-come itself (8 gongs for 8:00 a.m., for example).

Perhaps it’s more a “get ready, 8:00 a.m. is coming in just a bit” than an actual “here’s what the time is.” Or perhaps it’s based on some sort of intriguing French timekeeping of which I’m unaware.

Once I’ve gained enough confidence to ask, I will go down to City Hall to inquire as to the nature of the gongs — “Bonjour Monsieur. J’écoute qu’il y a deux cloches qui announce chaque heure, mais on s’announce en avance de l’heure — pourquoi?” With apologies for spelling, grammar and vocabulary skills long atrophied.

Tell us what you want to say. Maybe we can help. Is it that you want to mention that you’ve heard the clocks it’s just that they don’t ring until before the hour? Derek is right that it isn