Architecture Week is coming up here on Prince Edward Island again in October — you may recall coverage here  and blow-by-blow from last year — and I’ve been thinking about ways in which architects could better open their tent to we civilians (having office open houses and awards ceremonies is nice and all, but there’s only so much fun you can have in an architect’s office, no matter how nice the wine and cheese is).

Last year my friend Morgan turned me on to Minecraft, the digital world-building out of Sweden that’s sweeping the world. It took a year for me to get around to it, but after this year’s trip to Sweden I came home and installed it, and I’ve been playing it, off and on, on both my Mac and on the iPad. 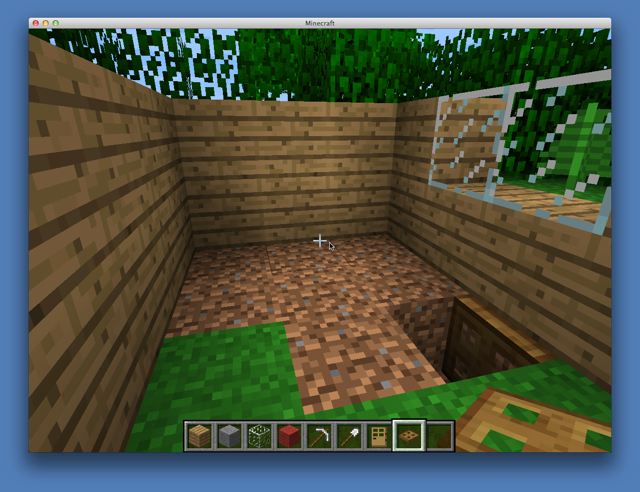 Minecraft is a hard game to characterize, especially if, like me, you’re not a regular gamer, without the generally-accepted vocabulary (“a 4x vertical action scroller with HUD and MOOG capabilities,” or whatever). I’d describe it as a “limitless world where you can build cool stuff out of blocks.” There’s much more to it than that — zombies and such — but at its heart Minecraft strikes me as being essentially a game about architecture.

Which got me thinking: wouldn’t it be cool to turn more people on to Minecraft, in the company of architects. Architects, after all, spend all day, every day, thinking about nothing but architecture.

I like the idea of creating opportunties for architects to talk to real people, and for gamers — serious and casual — to learn more about architecture, and the idea of taking real-world architectural methodolgies inside a virtual world.

So I’ve proposed to the Architects Association of PEI that a “Minecraft for Architects” workshop be organized for this year’s Architecture Week: an event to bring civilians, architects, and gamers together in the same physical space for an evening of virtual space making together. And I’ve proposed to help facilitate this if asked.

If participating in, organizing or otherwise engaging in such an activity would interest you, please leave a note in the comments; ideas for format and structure are welcome too.

Ruk, will jr. high and high school students be able to participate? If you know anyone who has a laptop or two or four they would like to donate to a classroom, I would be THRILLED. Unfortunately, many programs do not function properly for STUDENTS at school and I need a way to be able to engage them in these sorts of learning opportunities — off the network. Game Maker won’t work at school for students on the network because it creates an .exe and the system shuts down. I pilotes Game Force nearly a decade ago and it still hasn’t been resolved… we bring in laptops from Innovation PEI once a year to run the program. If I had a set of laptops students could do things every day at at school — morning, lunch, and after school. Also students are unable to download sprites for their game designs themselves… I taught them how to create gifs (using Paint Shop Pro 9 — it’s all we have)… Love your idea. I am sure it’ll fly :) Fran

I would see people of any age or ability as candidates for participation, especially students (my 10 year old cousin in Ukraine plays Minecraft).

You are a teacher with the prototypical set of technology challenges: someone with ideas, creativity and motivation faced with an infrastructure and organizational culture that’s not only unable to support you, but, in some ways, works to actively discourage you.

Our wireless pilot project at Prince Street School is a test to see how and whether it’s possible to set up a parallel infrastructure so that at least boundaries of bandwidth and firewall can be taken out of the picture. If it works, I’d love to see our model expanded to include other schools.

I have conversations almost every night with Oliver (11 years old, in grade 6 at Prince Street in the fall) about why the computer he has at home works better/faster than the old reconditioned Windows machines at home. What pains me, though, is not Oliver’s situation, but that of families who don’t have the better/faster technology at home as a counter-balance: for a student for whom digital learning is right for their learning style the notion that the bottleneck could be the gear or the bandwidth seems criminal.