We’ve now had a water meter in our house at 100 Prince Street for almost a year, so it’s a good time to look at what it’s costing us for water with a meter vs. what it was costing us under the old “all you can eat” plan.

Charlottetown Sewer and Water redesigned it’s bills this fall, and the new bills provide much more detail about usage and billing. Here’s a snippet from our November bill: 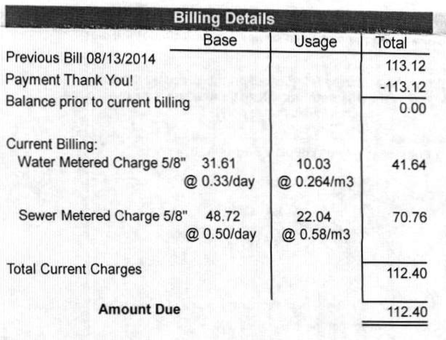 A couple of things jump out on that bill.

First – and this is something that was never broken out before in the old bills – is that we are billed for both water coming in (“water”) and water going out (“sewer”) and we pay more than twice as much per cubic meter for sewer than we do for water. This used to be ganged together under “water and sewer” on the bill, and it’s nice to see it broken out as it reinforces the fact that water used is water that needs to be disposed of, and that costs a lot of money.

Second is that the “base” rate, which isn’t affected by consumption, is a significant part of the bill – about 70%. That means that even if we used no water at all we’d still pay $80.33 a quarter just to be connected to water and sewer. I don’t begrudge that, as there’s obviously a liability to the utility as I could use water at any time. But it does dampen the incentive to conserve, and it dulls the financial feedback one gets from conserving or consuming more. For example, here’s our consumption history for the past five quarters: 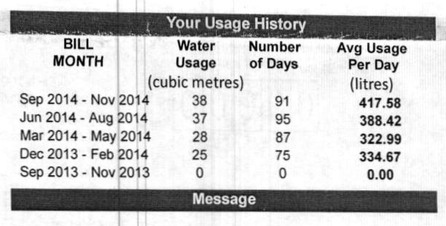 Our consumption from last quarter increased 7%, and yet our daily cost for water went from $1.19/day to $1.23/day, an increase of only 3%; the fixed base charge made the perceived cost of our increase in consumption less than half as “impactful” as it would have been without the base charge.

All that said, the new water bill is a huge improvement over the old design: here’s a comparison of old vs. new. 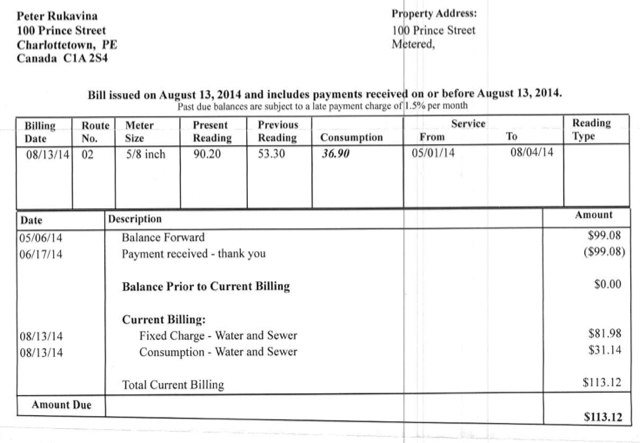 And here’s our bill, in the new format, for November: 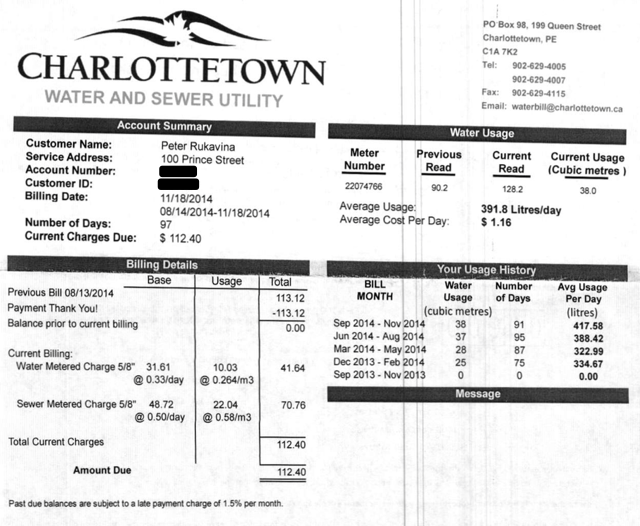 The new format is clearer, exposes considerably more detail, and provides consumption history information that was never aggregated together before.