Today was lecture number one of the four that I’m teaching this winter in Philosophy 105: Technology, Values and Science at the University of Prince Edward Island. Here’s how it played out.

I spent the afternoon yesterday – and a good part of the evening – developing a complex Powerpoint presentation wherein I laid out the terrain in front of us (open data, open source, open government, open society), provided something of a personal history for context, and ended with an assignment.

And then this happened: 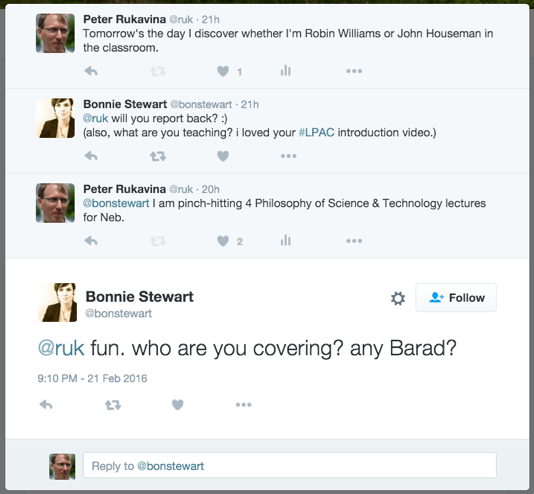 To which my visceral (self-directed) reaction was:

Covering!? Oh my, what am I doing? I don’t even know these students and I’m already covering something?

This was, in a sense, a conversation with my 17 year old self, for whom the very idea of “covering the material” was anathema.

So I jettisoned the Powerpoint and, over 2 hours this morning, in the Atlantic Vet College cafeteria, I came up with a reworked set of slides, much shorter and with space for real dialogue with the students after the scene was set.

Which was a terrifying prospect.

“I don’t know how to have a real dialogue with the students!”, I worried to myself. “What if they don’t say anything?”

Fortunately I had two allies in working through this terror.

First, 17-year-old-me reassured 49-year-old-me that, in the right environment and with the right setup, the students would rise to the challenge.

Second, I re-watched Johanna Koljonen’s introduction to the 2013 Alibis for Interaction conference and remembered that I, as the designer of the experience, had tremendous latitude in setting a situation where this would be more likely to happen than not. In Johanna’s terms, I could create a magic circle.

So here’s what I did.

I went to the UPEI Bookstore and bought 2 boxes of dry erase markers, reasoning that I could hand one to each student and, therein doing, welcome them, make eye contact, and share a sort of totem with them.

I titled my lecture Megalomaniacs & Magic Circles: The University as a Technology, positing that Philosophy 105, and the university that cradles it, are a complex technological system that we, students and teacher, are part of, affected by, both beneficiaries and victims of.

My goal was for the students to start to feel agency over their educational experiences, and to reflect upon their own power as actors in the education mechanism. As such it was an attempt to both explore some of the terrain of Technology, Values and Science while, at the same time, to begin to build a magic circle in which we could go on to dwell together in the days to come. 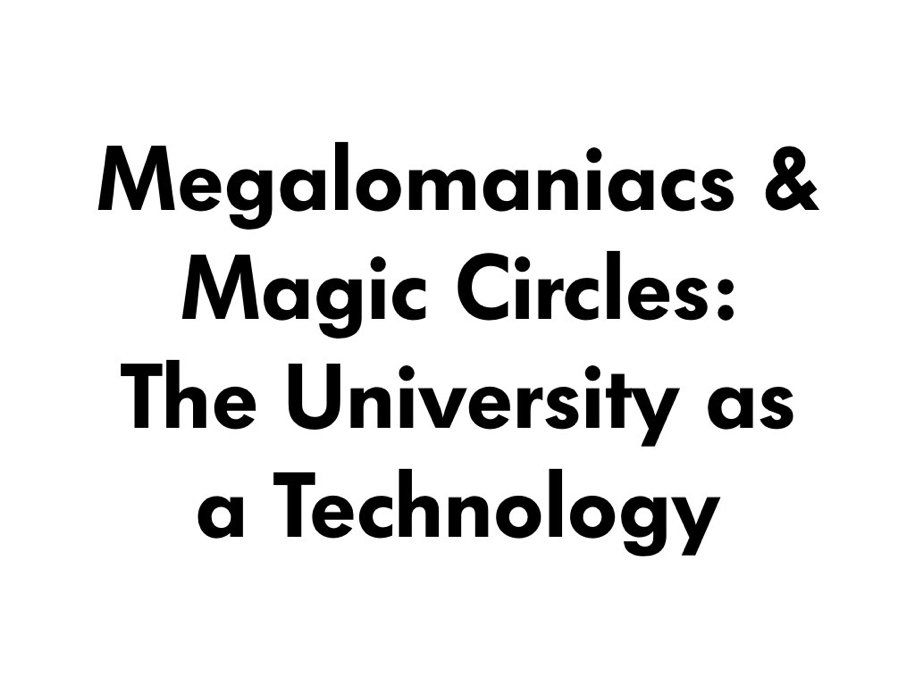 To begin, I talked a little bit about two formative educational experiences from my past: my semester at the Ontario Science Centre Science School (which essentially ruined me for formal education, so unusually participatory as it was): 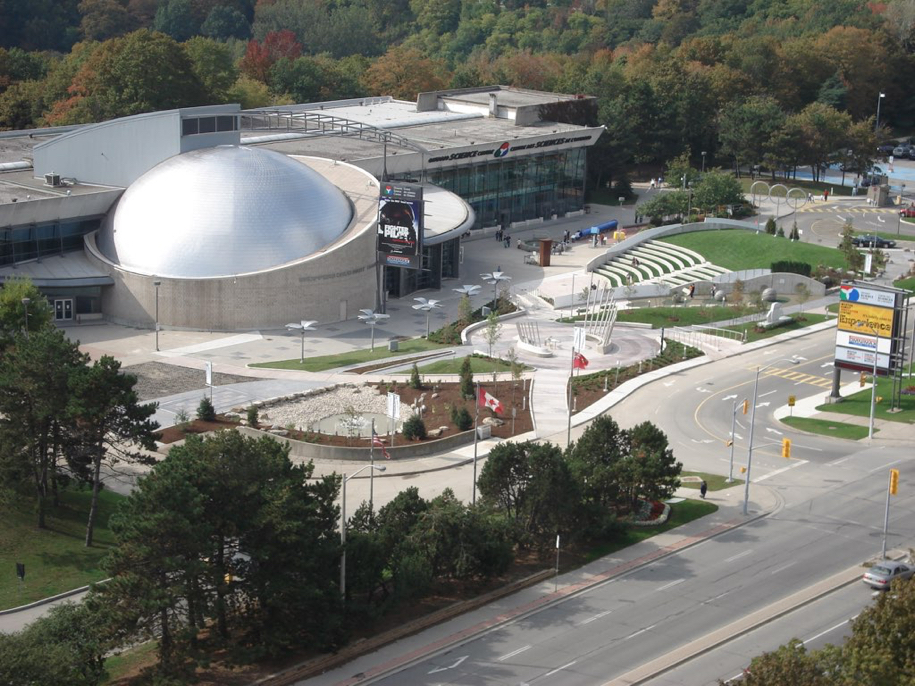 And the year I spent at Trent University which, although bucolic: 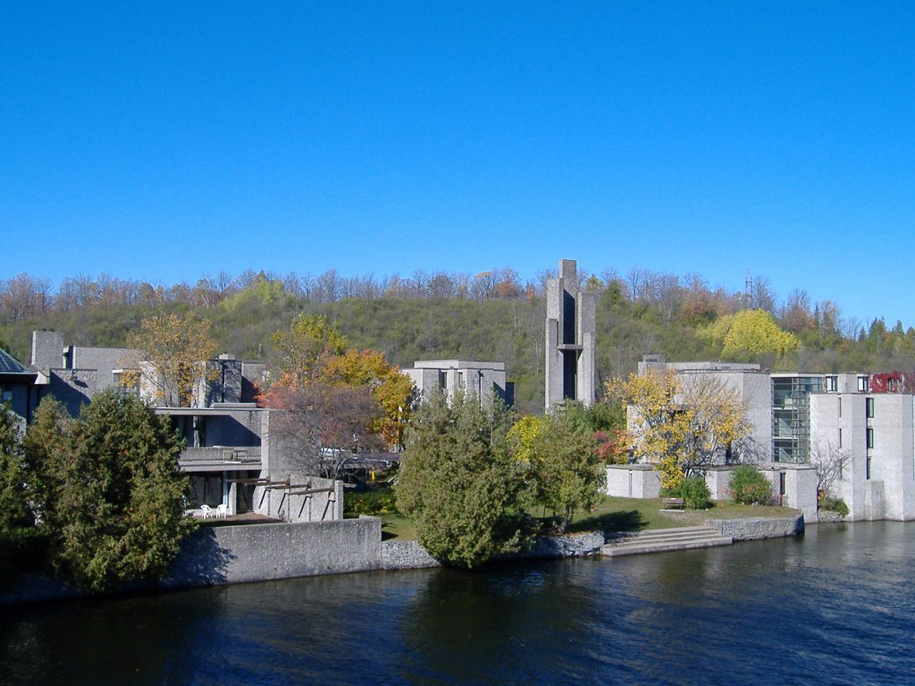 saw me ending up far too often in rooms like this (the Wenjack Theatre), listening to 50 year old professors droning on about something that didn’t particularly interest me: 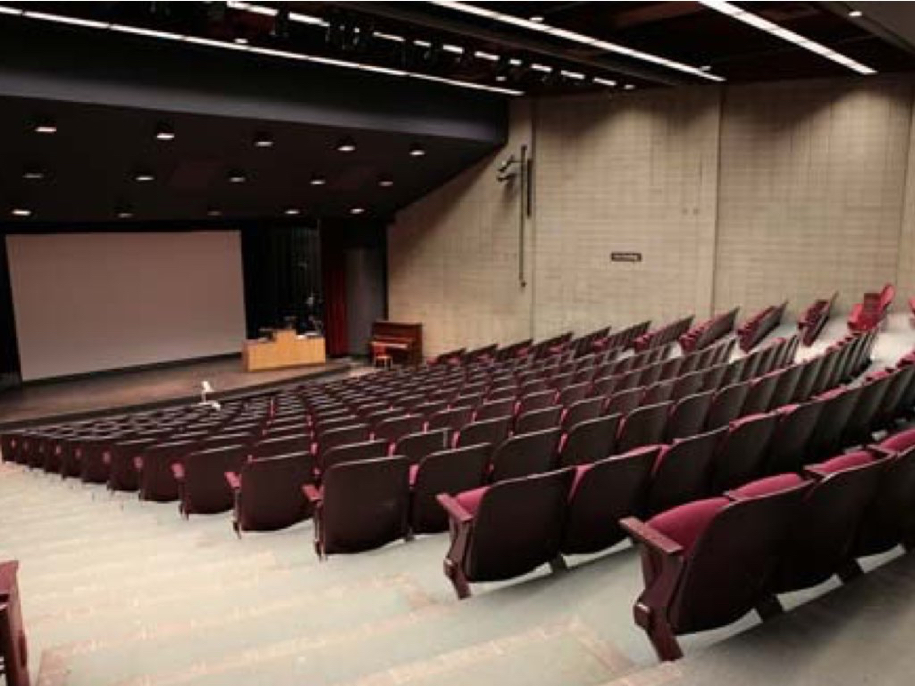 I then noted the irony that, 30 years on, I was now a 50 year old professor at the front of a similar lecture theatre in danger of droning on about something of no interest to them: 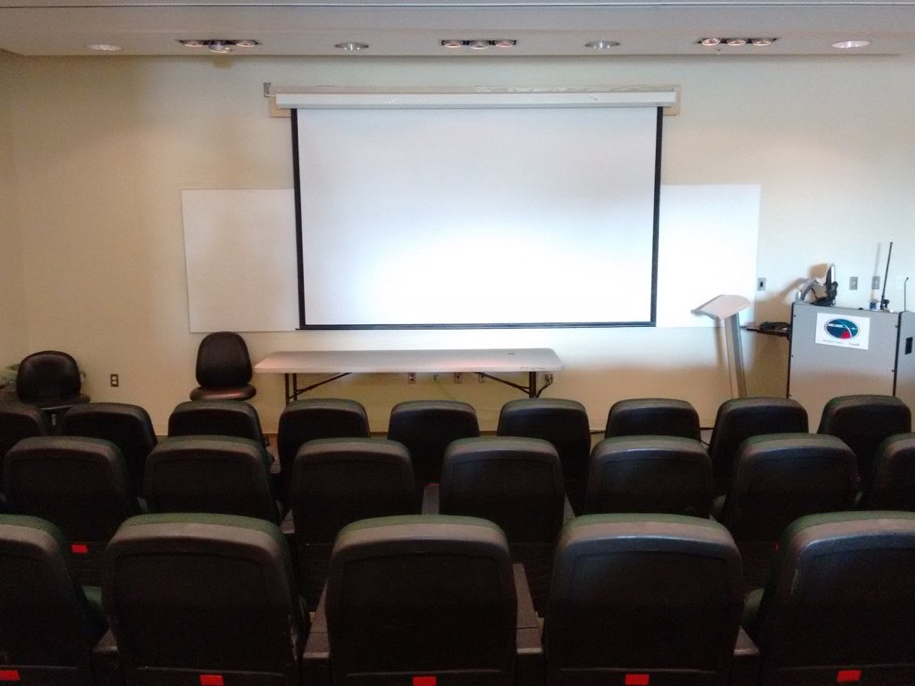 I then referenced the tweet from the day before, the Robin Williams vs. John Houseman one: 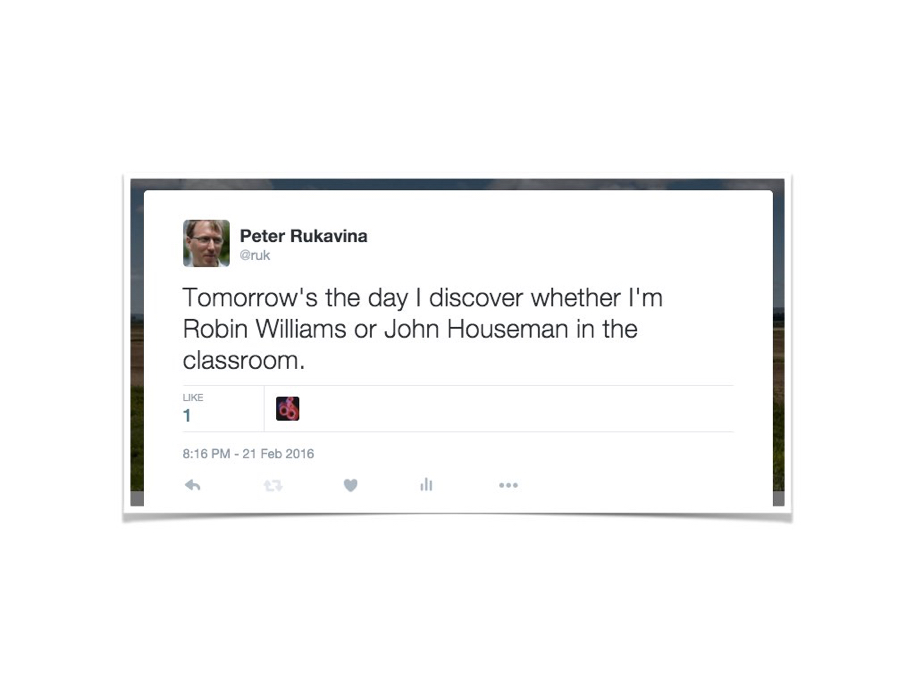 By way of putting the Tweet in context I showed two film clips.

First, the scene from the 1973 movie The Paper Chase, the scene where Professor Kingsfield first encounters Mr. Hart:

And, second, the scene from the 1989 film Dead Poet’s Society where Robin Williams first encounters his class:

After watching each, I suggested that, while the two professors might be seen to be polar opposites, they are also of a kind: megalomaniacal educators convinced firmly in the rightness of their world view. I talked about the sad irony of almost everything else changing in the last 30 years except the tradition of the “megalomaniac educator” standing in front of their students, imparting their wisdom.

This led, in my thinking this morning and in the lecture itself, to this follow-up Tweet, where I replied to myself: 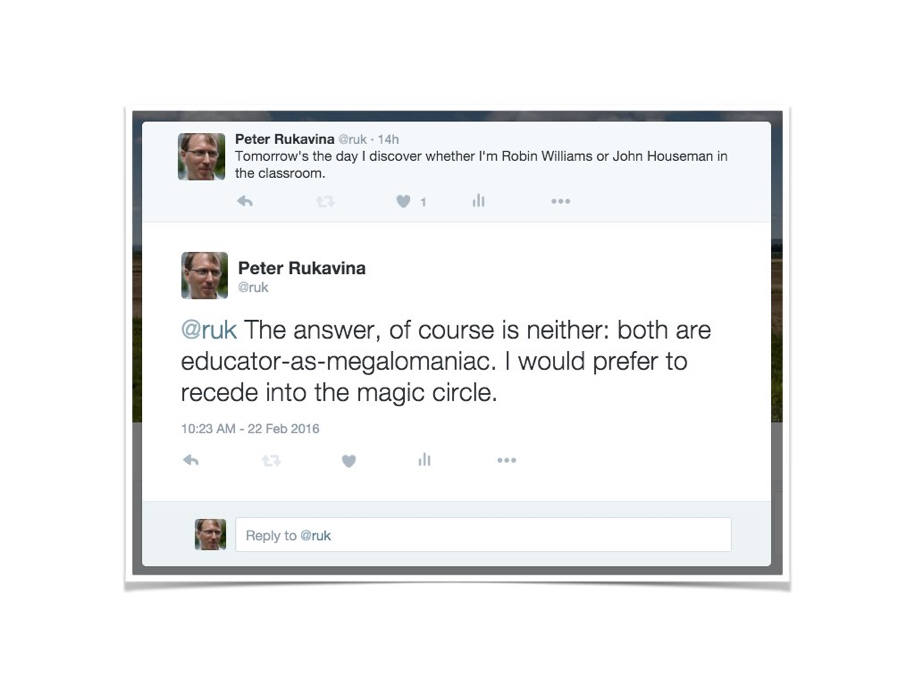 But what of this “magic circle.” For that, I turned to Johanna’s explanation, as I could find no better:

That was a valuable 20 minutes of our time to spend, but I felt it worthwhile, as it set the scene so well for what came next: I invited the students to use their totemic dry erase markers to come up to the whiteboard, carve out a space for themselves, and try to represent, in words or image, their own experience of university education so far (for most of them they’ve been at it only since last September). 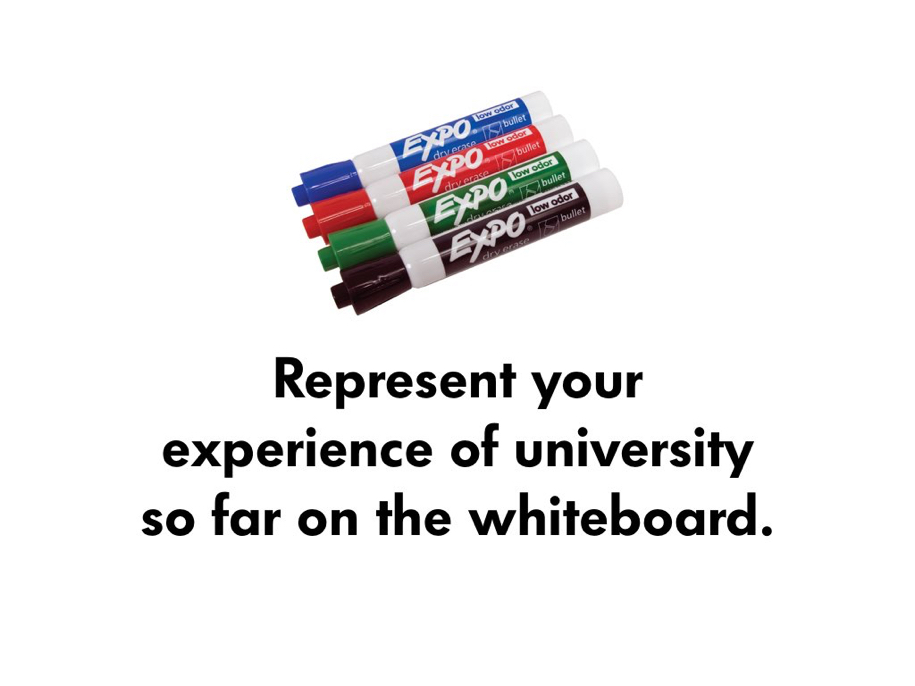 I am happy – and somewhat relieved – to report that they all rose to the challenge. Some eagerly and immediately, some after a few minutes to think and somewhat timidly. But everyone. 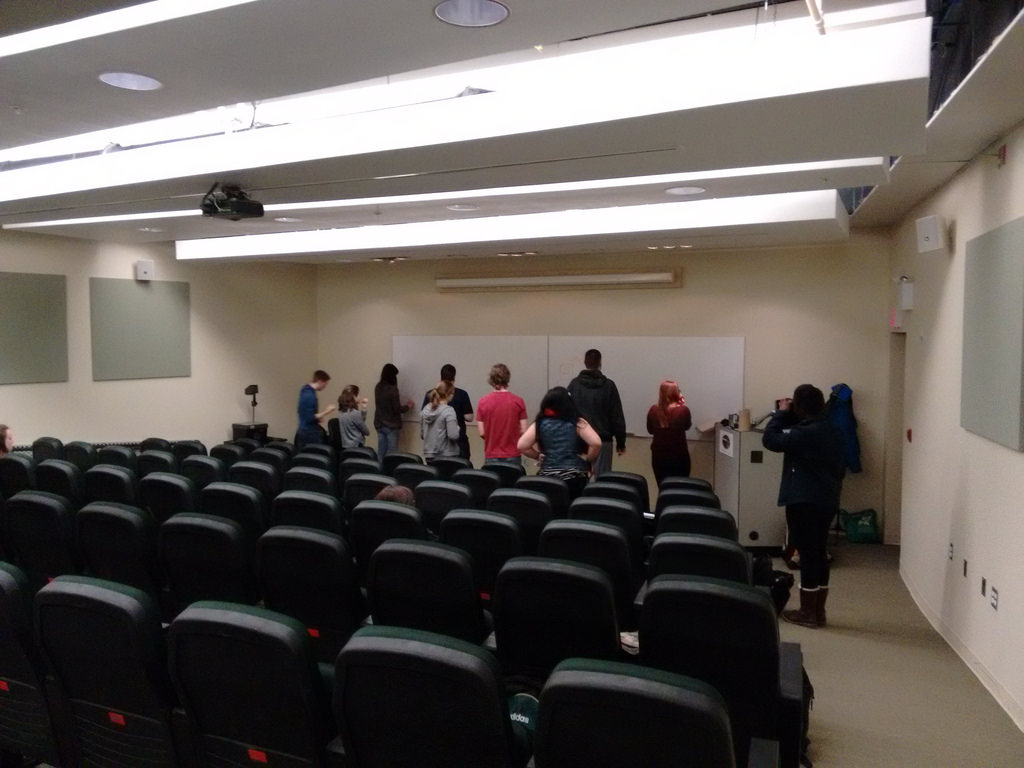 Their representations brought joy to my heart: 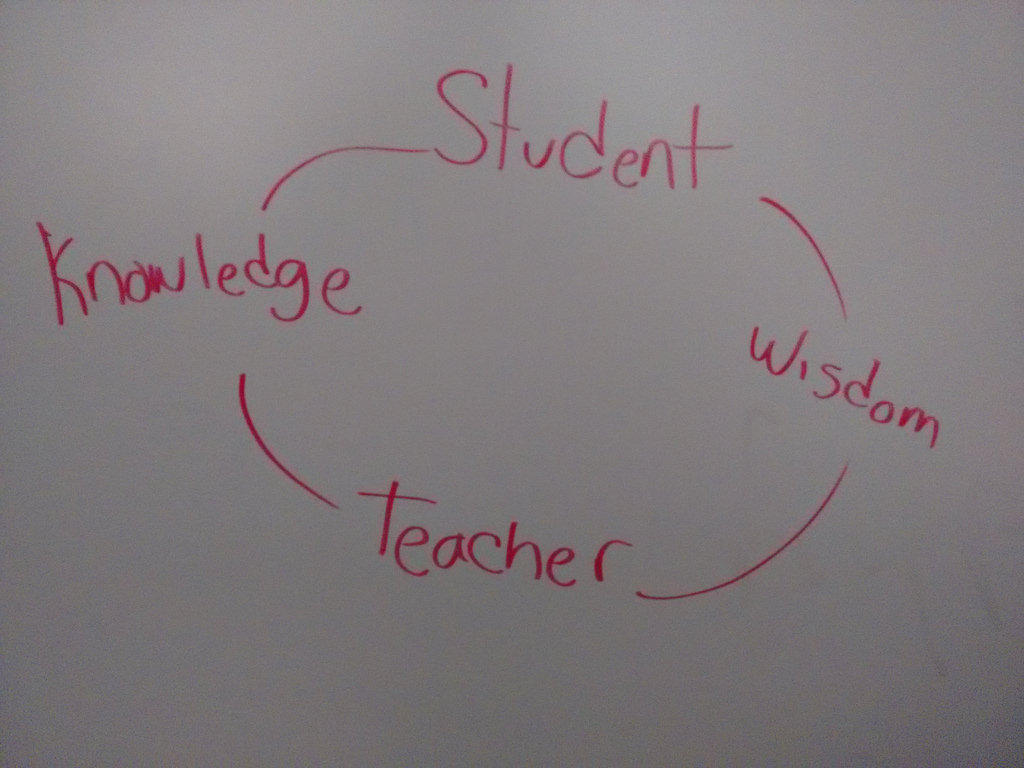 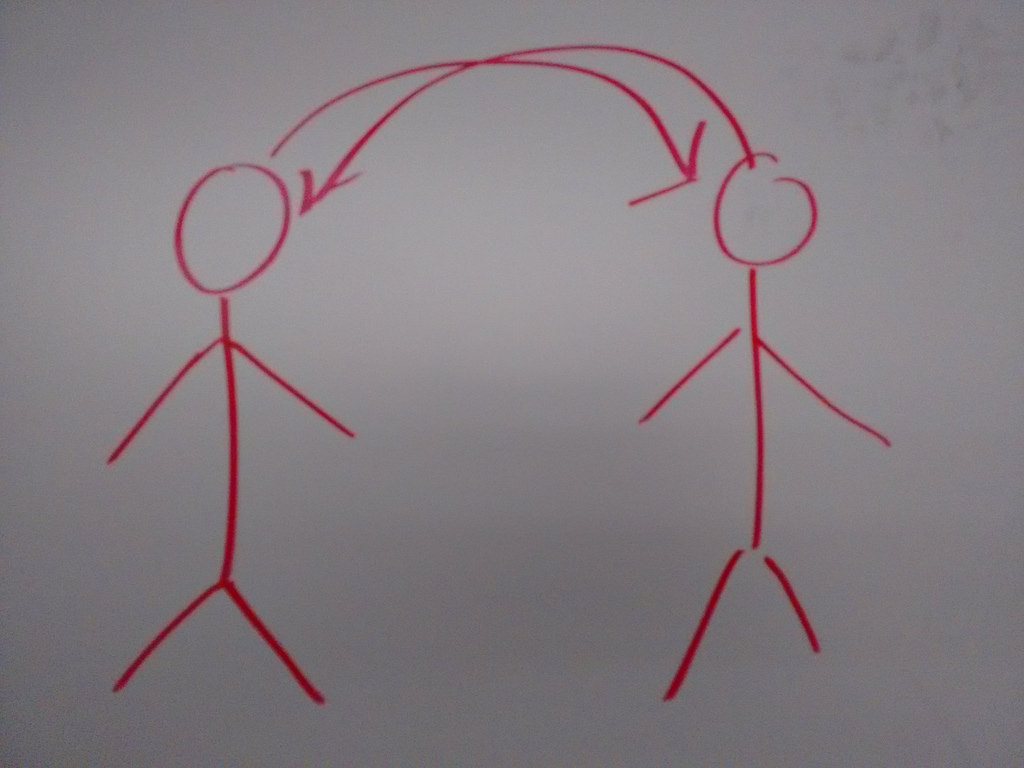 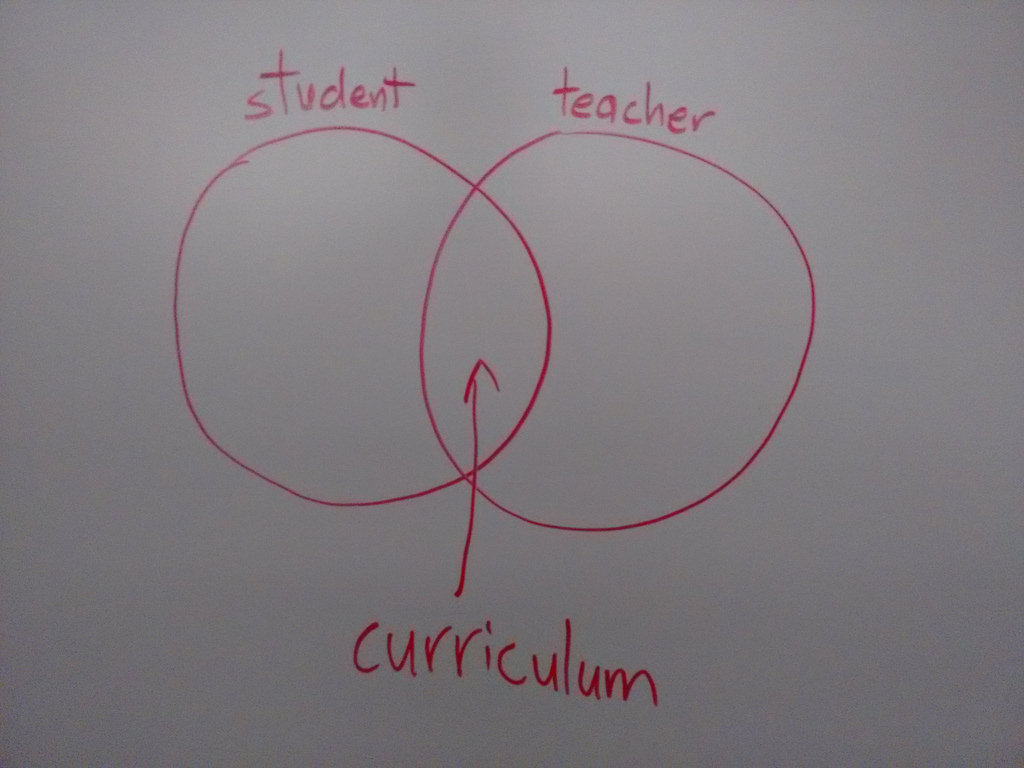 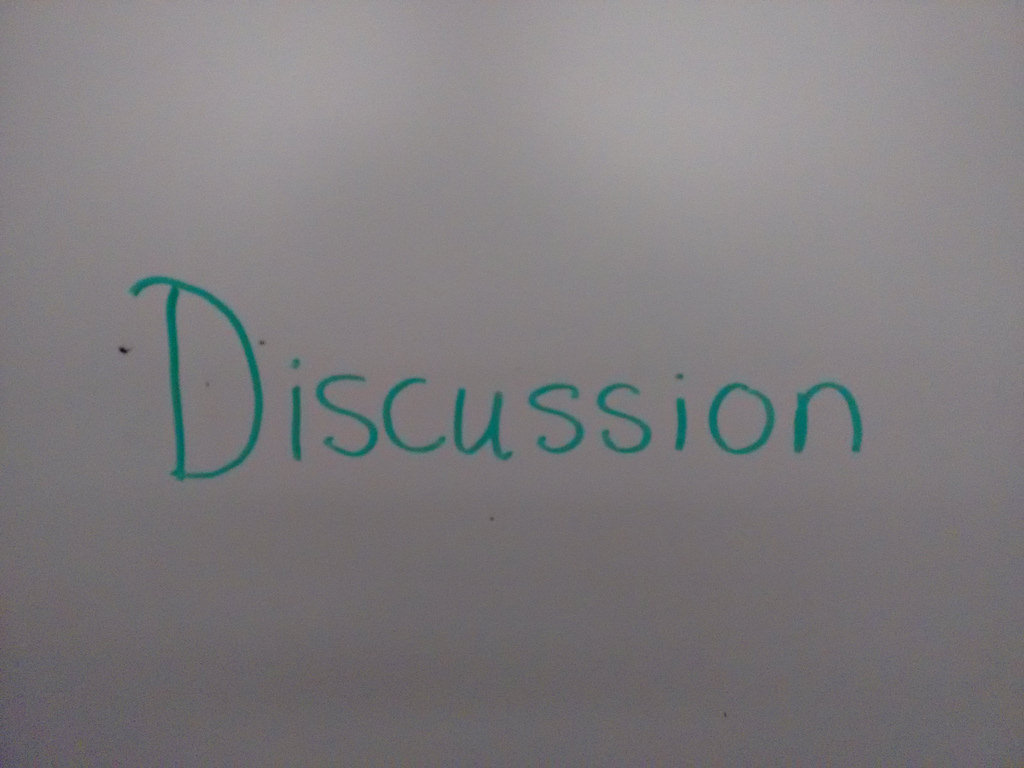 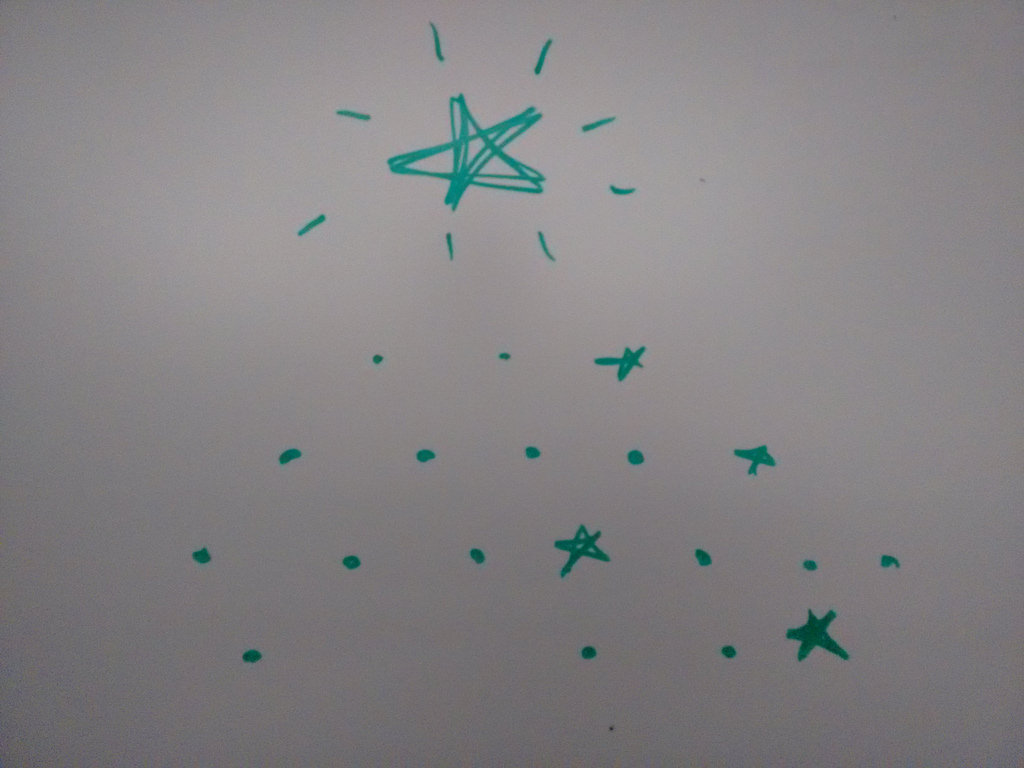 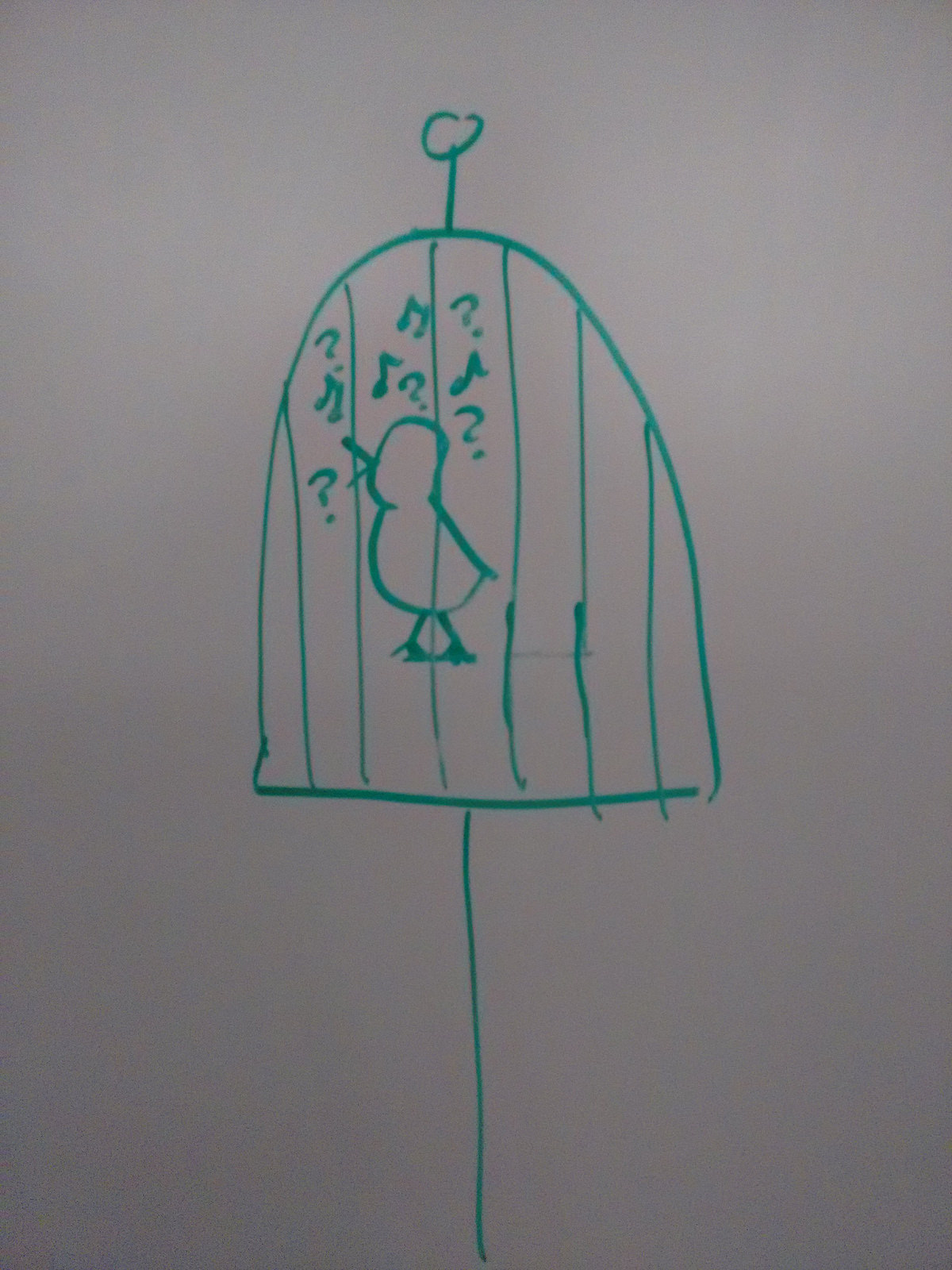 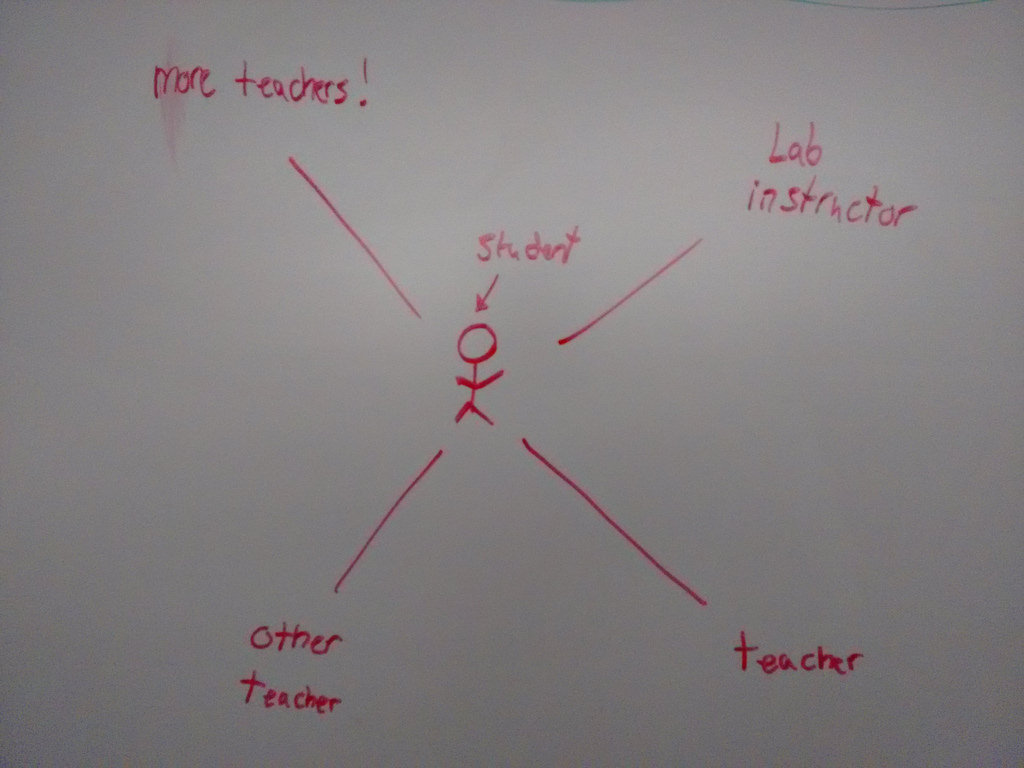 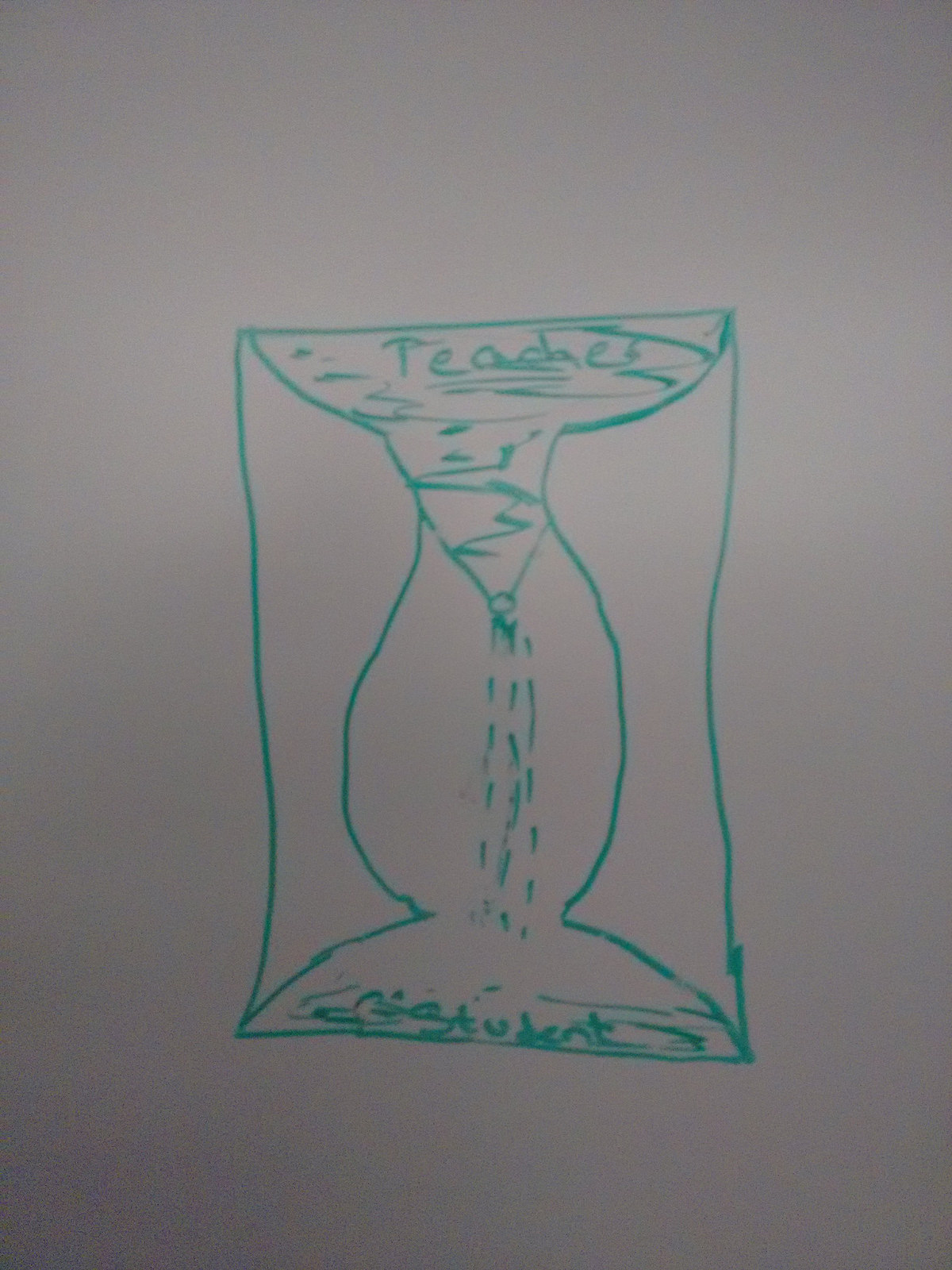 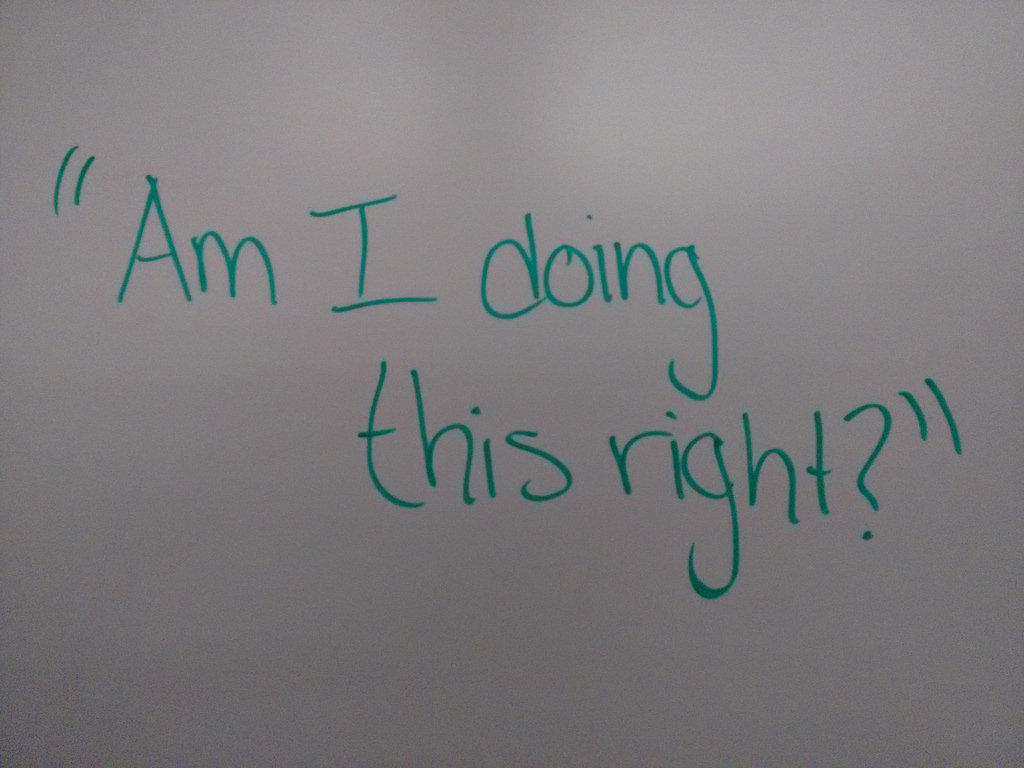 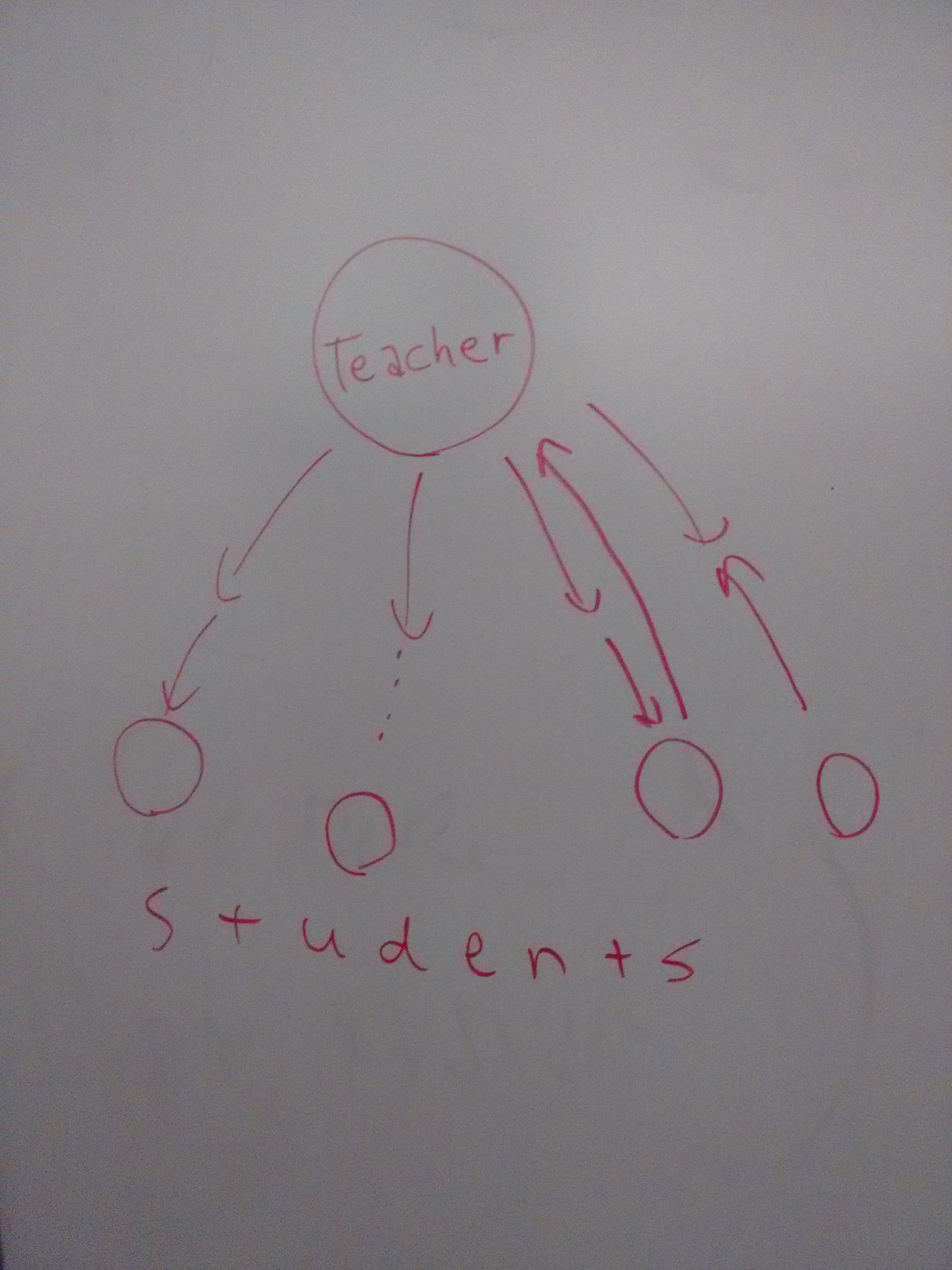 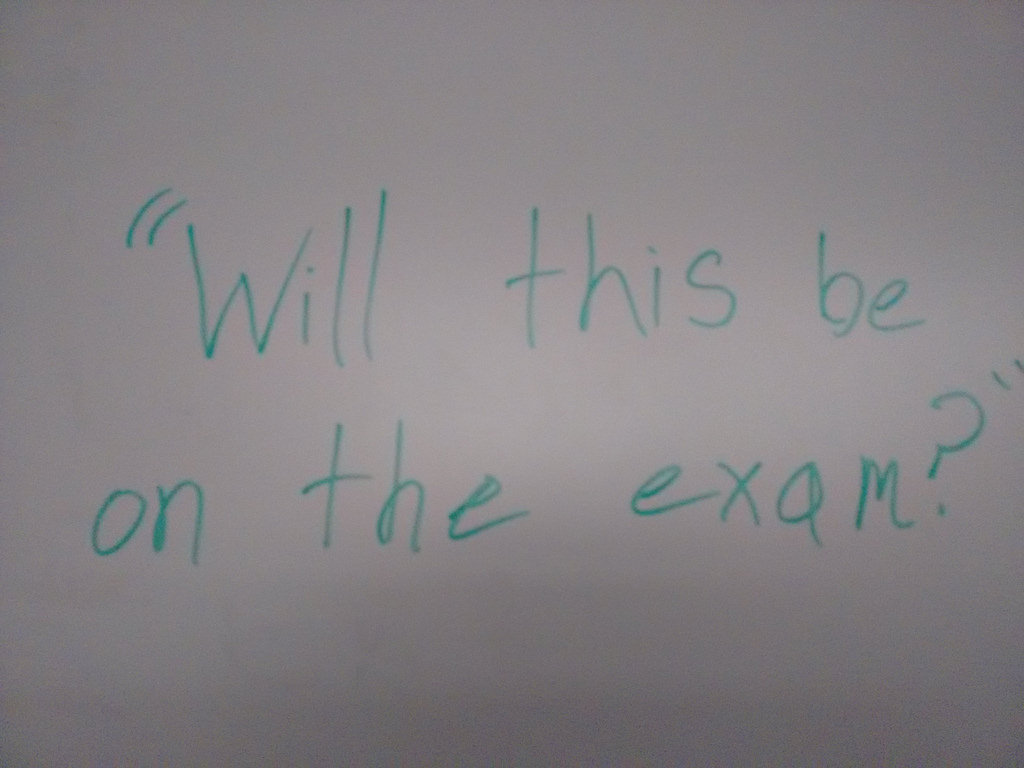 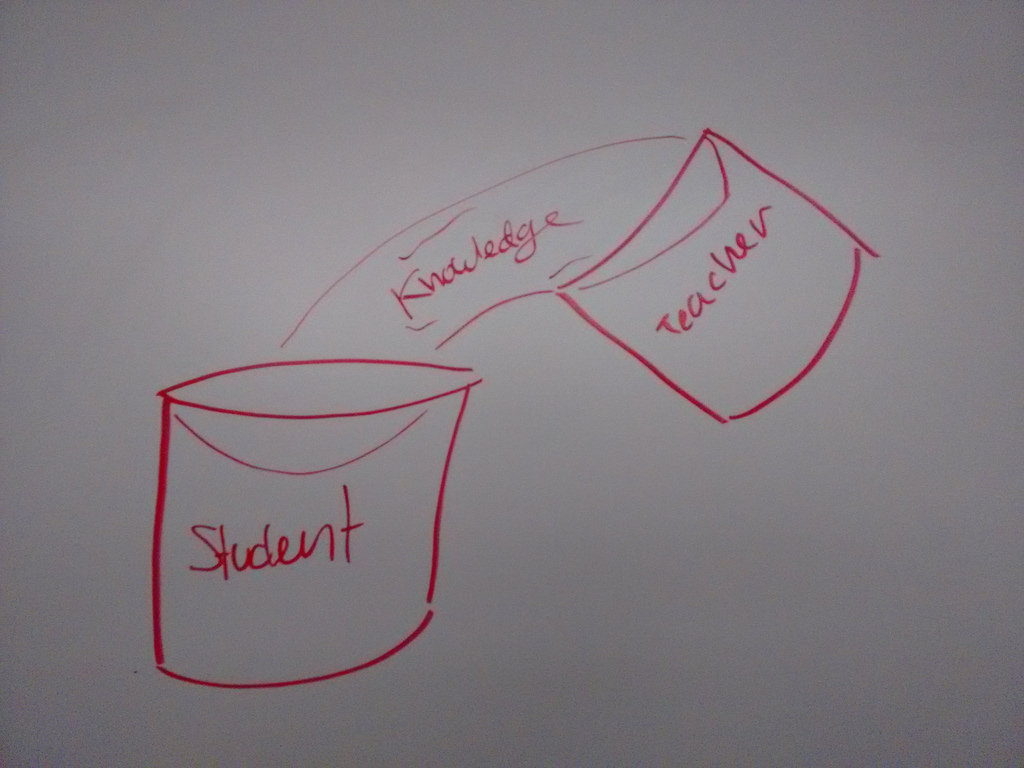 I asked each student to speak to their representation.

My faith in them was established. And my worries that they would not fully participate, with the right setup, was for naught.

Using their work as a jumping off point, we finished up the session returning to the notion of the magic circle and, for example, the rules, implicit and explicit, that exist in the university lecture theatre.

We talked about how professors relate (or don’t relate) to students. How university education appears to cater to a subset of students who “get it.” About how, in the ideal, professors learn as much – or more – as students. I talked about my hope – referencing a graphic in Johanna’s slides – that in our short time together we would both emerge from our own magic circle transformed. All of our discussion was rooted in the concepts they surfaced on the whiteboard: that is what we “covered” and we could not have covered it without them.

We’re back into the circle on Wednesday afternoon.

If I were branding it, I'd call it a "magic zone." Although I got it when I watched the video, the word "circle" distracted me quite a bit from the meaning. "Zone" better communicates the meaning, I think. It connotes a space, a policy and even a state of mind and action, as in "being in the zone."

Whoops: I meant to post that as "Oliver B"