Despite having gassed numerous Drosophila in high school to better my understanding of genetics, most of what I ever knew about the science has faded away. Today I read:

…and it blew my mind. I’m sure that I knew this at one point, but it seemed new (and fascinating) information this afternoon.

This is all quite relevant to me this week because I received the results of my DNA test from The Genographic Project, a National Geographic program that’s a “landmark five-year study that will assemble the world’s largest collection of DNA samples to map how humankind populated the planet.”

My Y-Chromosome, a chromosome I received from my father, who received it from his father, and so on, identifies me, because of a marker called M170, as a member of “Haplogroup I.” The National Geographic says:

Haplogroup I, is widespread throughout southeastern and central Europe and most common in the Balkans. Members of this haplogroup carry a 20,000-year-old marker dubbed M170.

The later spread of this lineage could be also tied to the mid-first millennium B.C. Celtic culture. The tantalizing possibility could explain the wider dispersal of this unique genetic marker. 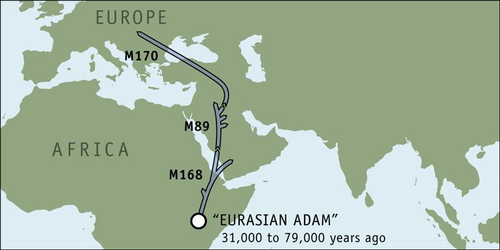 I’ve got a lot more to learn now about what all this means.

I sent my DNA sample in last week to the Genographic Project. I’ll be posting my results when I obtain them.

Very cool, I’m envious. Feel free to hit me up for explanations if you like. I think I have a pretty good handle on this stuff. A haplotype is a set of characteristics that you determine for a particular individual by looking at their genome sequence at a particular bunch of positions to see what single bases or short sequences of bases that individual has there in the DNA of his or her chromosomes. You’d might think to look at these places only after you notice a pattern across a bunch of individuals—you always see the same thing at these sequence positions in people native to geographic region R, for example. But we sort of know where to look for useful patterns, because there just aren’t many variable regions of the genome. We’re mostly all identical in sequence, and we tend to see differences at very particular spots in the chromosomes—e.g. at a particular spot within the so-called junk (though you also get variations in some genes, which can make people respond unusually to drugs). Variation at a single base is called a SNP (single nucleotide polymorphism). Genome researchers also build up haplotypes from junk sequences called microsatellites.

Another thing to know about the X, BTW, is that it’s dwindling and about to fall apart, causing speculation about the end of men.