At the beginning of every day’s proceedings in the Legislative Assembly of Prince Edward Island is a period called Matters of Privilege and Recognition of Guests, an opportunity for members to speak to anything from congratulating their local curling rink for a win to recognizing visitors in the public gallery. To the uninitiated it is perhaps the weirdest part of the house proceedings, mostly because it actually doesn’t seem to have much to do with the important matters of the day. But it’s a tradition and I’ve come to view it as a part of the social fabric of Island politics.

On Tuesday morning I got an email from the Executive Director of the PEI Home and School Federation suggesting that I drop down to the Legislature that afternoon to watch Hon. Doug Currie deliver a statement on education governance. As the Statements by Ministers period doesn’t happen until after Question Period, we in the public gallery who arrived at the 2:00 p.m. opening got to see a lot of house business before Minister Currie’s statement, and I had the odd experience of being recognized three times during Matters of Privilege and Recognition of Guests. First came Hon. Robert Ghiz: 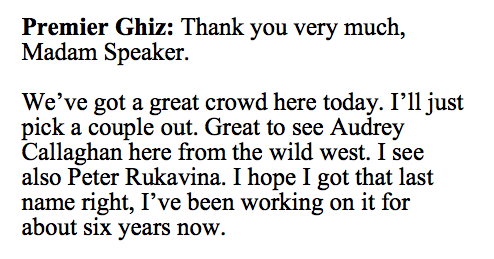 And then, a few minutes later, by Cynthia Dunsford, an old friend from her pre-political days: 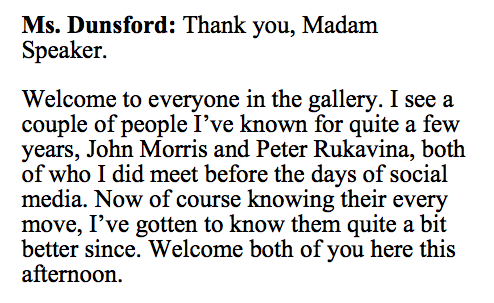 And finally Hon. Doug Currie (who happens to have the longest title I’ve ever encountered: Minister, Education and Early Childhood Development and Justice and Public Safety): 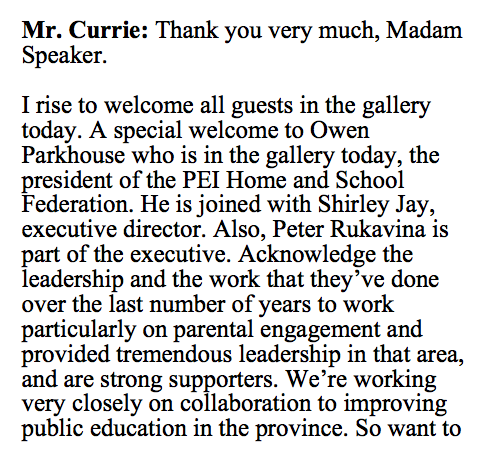 I should hasten to add that I am neither a Liberal nor, indeed, anything but politically agnostic: almost everyone who sits in the public gallery gets recognized – there were only about a dozen of us on Tuesday, so it’s not a hard feat to accomplish.

That said, I to feel like achieving this hat trick has leveled me up to a new plateau on the path to Islanderhood, and I’m fully expecting to get an envelope slipped under my door with the passwords to the secret ceilidhs any day now.