My friend Ton Zylstra’s talk at Cognitive Cities, Spice Up Your City With Open Gov was a call to action for citizen hackers to catalyze the release and use of open government data. While Ton’s talk was full of useful memes, the most useful one was a call to find “The Man in the Blue Shirt” – a single advocate inside the public service to ally your efforts with. 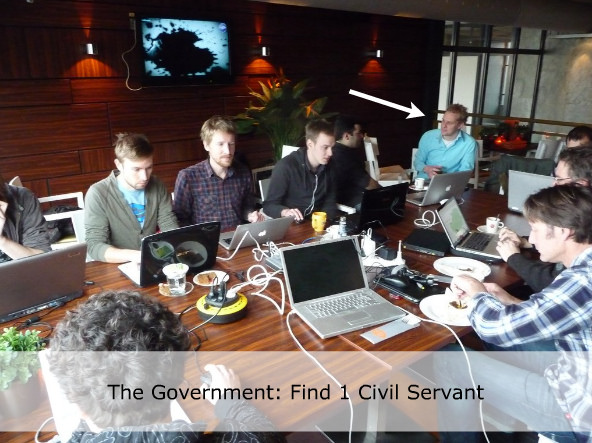 My government data efforts over the years have profited from many such “blue shirts” – people working in government who “get it” and have the logistical and social skills to help you get things done. The halls of the municipal, provincial and federal governments are filled with people like this, just waiting to be asked to help.

The City of Charlottetown releases building permit, subdivision and rezoning approval data every week locked inside PDF files. It’s good that they release the information on the web, but because it’s released as data that, for all intents and purposes, is just an amorphous mass of text, it’s next-to-impossible for citizens to add value to the data.

Let’s say, for example, that I want to build an application to alert me when a building permit is issued within 1 kilometer of my house. Or an application that displays a map of the city showing where building permits have been approved. Or a report showing how long, on average, it takes the city to approve permits. With the data in its current form, I’m left to try to manually scape the data out, and it’s practically impossible to build these kinds of applications.

The stock answer at City Hall is that “we have no IT department,” which is true. But it’s precisely inside small bureaucracies like the City of Charlottetown where releasing data in an open, usable form is most useful: the City, in its citizens, does have an IT department, and it’s we the people. The relatively small engineering effort required to release data in an open form could have tremendous leveraging effect once we citizens get our hands on it and enliven the data in ways the City itself never could.

To get this effort rolling, I’ve created a github project called Charlottetown-Building-Permits and taken last week’s PDF file of building permit approvals and created an XML version of it along with a draft XML schema.

It doesn’t take much more effort to create this XML file than it does to create a PDF file (and, indeed, the XML can be used to create the PDF file if needed), and yet the XML file is revolutionarily more useful.

Consider this a call to action for a “man in a blue shirt” – yes, Councillor Rob Lantz, IT-savvy Chair of Planning and Heritage, I’m looking at you – to take this and run with it. I’m here to help.

I can’t comment on a specific councillor, but a big +1 for Open Gov. The example applications are interesting, but the key message for non-techies is that once data is ‘open’, it can be used in unexpected and innovative ways.

In related news, here is a piece about the efforts of the federal gov’t: http://bit.ly/erV730

Also, an interesting article about efforts in Vancouver: http://bit.ly/959DB3

I am, in fact, wearing a blue shirt right now. Taking a look at the files on GitHub. Will get back to you.

In the PDF files the city makes available now, the only structured data that can be used to reference an actual property is the Property Identification Number (PID), as the civic address information provided is too free-form to accurately map to the civic address database.

Which raises the question: how do I find out more about that property?

Fortunately it’s possibly to stitch together two separate but related Province of PEI services, Geolinc and the Address Locator (disclosure: I was the programmer who originally constructed the later, but I’m not relying on any special knowledge of how it works) to pass a PID, retrieve the civic address and then look up details of the address.

I’ve packaged this up into a PHP script, get-address-from-pid.php as some necessary glue that will be useful once the City starts releasing the data about permits in XML.