Regular readers may recall that I am not a huge fan of the way we educate our children. Partly (and maybe even mostly) this is because, although I was technically a “good student” throughout much of my own schooling, I didn’t actually end up learning very much. Everything I have learned, I’ve learned by doing it; while I recognize that some people are comfortable dwelling in the theoretical, I’m what you might call a “kinesthetic learner” — if I’m not mucking about inside something, I’m not learning.

While it’s too early to suss out the depths of Oliver’s learning style, all appearances are that he shares this trait with me to some degree (and with his mother, to boot).

Which explain, perhaps, why today was such a wonderful day for Oliver and I.

We were out on the streets of Copenhagen at 8:30 a.m. this morning. We caught bus 6A to the main station — about 10 minutes up the street — and from there took the 37 minute train ride to Lejre, home to the Lejre Forsøgscenter — the Lejre Experimental Centre.

Now in this case “we” means me, Oliver, and about 100 school children who came along on the same train and bus with us. While I thought this would bode poorly for our experience, it turns out that there are a lot of acres to spread out into, and what we saw of our fellow travelers was entertaining and helpful rather than crowded: 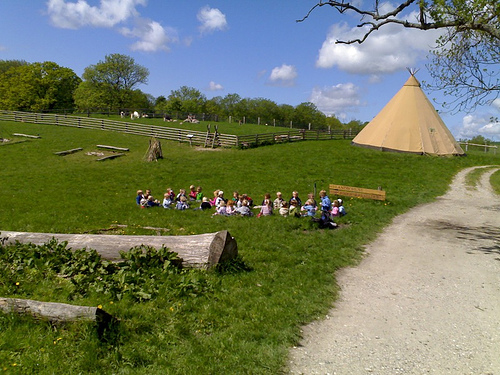 Now we’ve all been to those “ye olde historic village” places in our youth, haven’t we? Black Creek Pioneer Village. Orwell Corner. Upper Canada Village. And so on. The usual drill sees a cast of ye olde people dressed in ye olde costumes doing ye olde things for our education and amusement.

While there is a touch of this at Lejre — a weaver weaving, a potter potting — even these are done in a “no velvet ropes” kind of way. There is nowhere “off limits” at Lejre, no “fragile antiquities” that you can’t touch. It is truly a living museum.

What’s more, the heart of the Centre is a series of experiences that focus on teaching about the stone age and the iron age. And it is in this that the kinesthetic gloves come off and Lejre comes into its own.

We started our visit with a walk along the Karpesøen (Carp Lake) to the Historiske værksteder (Historic Workshops) where we had conversations with the aforementioned potter and weaver (I believe I may have convinced the weaver to try out the “sheep to shawl” concept so popular at Canadian agricultural exhibitions; she needs to learn how to spin first, though). 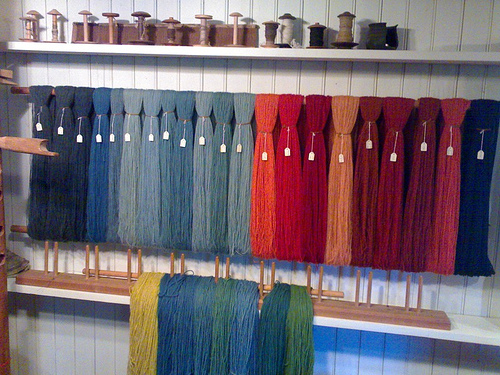 The weaver was housed in a thatched roof cottage — most of the buildings have thatched roofs, at least the “post-thatch” buildings — that was having its roof re-thatched. Watching that process alone was worth the visit: it’s a complex operation conducted by two men, and appears to essentially involve weaving a roof out of straw. 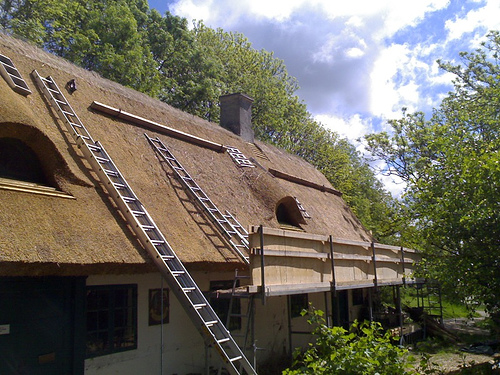 Around the corner and up the hill a bit we came upon a sounder of wild boar (yes, that’s what it’s called). Other than being borderline frightening in a “we have hidden powers and could storm through the fence and eat you” kind of way, the boars, especially the frolicsome baby boars, were delightful.

Up the hill a little bit more — by this time we’d integrated ourselves into a roving band of Icelandic senior citizens — we came upon a group of Canadian young people in residence as ye olde children in Landbohusene (Rural Cottages). They looked to be doing the country proud, churning butter, gathering water and chopping onions.

Back down the hill for lunch, we passed the frolicsome boar sounder mid-feeding, with an animated Dane conducting a session for a group of students about something I have only to assume involved boars and food.

It being 11:30 a.m. by now, and with only a train station croissant in our bellies, we stopped for lunch. Right in the middle of the Centre is a “Food Stand” that sells, among other things, very tasty smoked salmon and apple sandwiches and hot chocolate.

Sated, we headed over to the Filmsal (Cinema) to watch a Danish slide show about the aforementioned “heart” of the museum — a set of experiences set in a place called Båldalen (Fire Valley).

After the show, it was down to the kinesthethesia.

Our first activity, ably guided by staff person Sara, was to take some wheat and turn it into flour. We did this by pounding. And pounding. And pounding. A rock against a bigger rock. As we were in a “between kindergarten classes” empty spell, we had the wheat pounding area to ourselves, and Oliver and I each had our own station. Because of my awesome strength and advanced years, I was able to best Oliver’s output; Oliver, however, had a much more entertaining style.

After wheat was turned into flour (and here I must admit that I had little idea how this process actually worked before pounding out the flour myself), we put it into a wooden bowl, added a little water, made a patty about the size of a hockey puck and placed it on an iron disk over a hot fire. In about three minutes we had ourselves a little hunk of unleavened bread. It was hot and crunchy and Oliver at the whole thing with enthusiasm.

After making bread we headed over to the “chop wood with an iron axe” section and, after assurances from Sara that Oliver was quite old enough to participate, we each grabbed an iron axe, stood behind a log (with a helpful “safety log” between our legs and the target) and hacked away. Oliver got really good at it after a while; his Grandpa Joe will be proud of his new skill. 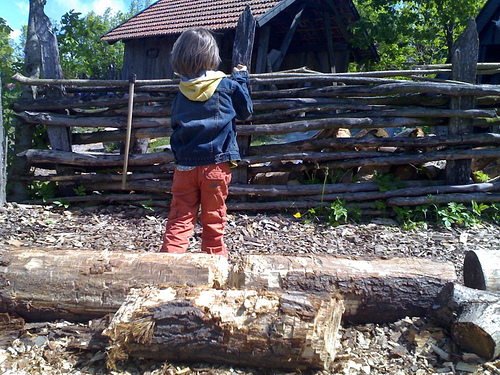 Next it was down to the dugouts. Oliver’s “small watercraft” experience to this point had been limited to the swan boats at Rainbow Valley; dugouts were something more of a challenge, especially given the “you can figure this out on your own just like they did in the iron age” ethos at play (albeit with a modern concession to lifejackets for everyone).

We ended up at opposite ends of a dugout that was about 20 feet long — a sort of super-dugout. Obviously my iron age ancestors didn’t weigh as much as I do: once I stepped into the boat there was about an inch of space between the lip and the water. But we managed to make it go, using our primitive iron age paddles to head out in the small pond, execute a turn or two, and make it back to shore in one piece.

Undrowned, we continued on. Next stop: the iron age.

The highlight of the iron age was the blacksmith. Oliver and I were sitting in a thatched roof iron age cottage having a discussion about what exactly the iron age was — iron better than stone for cutting, things made out of iron, etc. — when Oliver mentioned that horseshoes are made out of iron. At that exact moment a barefoot blacksmith bellowed in the door and said “I make horseshoes — want to see my shop?” We followed him: 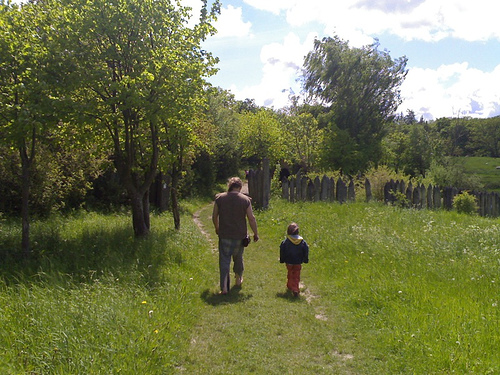 I have always found blacksmiths to be rather standoffish types. Or perhaps, because blacksmiths fall into that “type of guy to which Catherine is unnaturally attracted” category, perhaps I’m standoffish towards them. In any case, I’d never had a good one-on-one with a blacksmith until today. This guy knows his stuff and can talk and explain and hammer away and man the bellows and answer Oliver’s questions all at the same time.

You’d think, living with a metal-smith for 15 years as I have, that I would know more about how metal works. I suppose I simply forgot to ask. We sure learned a lot today. Like how you make charcoal (burn wood in an oxygen-reduced environment), where iron comes from (certain boggy situations produce rocks from which iron can be extracted), what colours iron glows with at various temperatures (white is 1200 degrees), that cast iron is very breakable, how to light a fire with flint, what bellows do. And more. We talked with the barefoot blacksmith for almost half an hour. And walked away with an intimate knowledge of his art.

There’s nothing like learning about the iron age while sitting in a thatched-roof, mud-coated blacksmith’s shop with a fire blazing at your feet and a barefoot blacksmith telling you tales.

After the iron age, we ventured on into the stone age. This era, because of its distance from the centre of the Centre, seemed lesser traveled, and we had vast expanses of pastoral stone age splendor to ourselves. 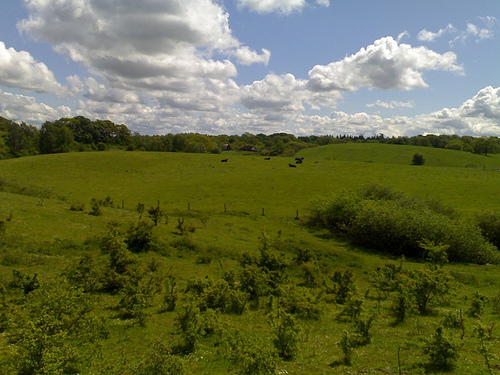 Okay, so maybe that’s not stone age splendor per se. But it certainly was beautiful countryside. When we got to the Stenalderbopladsen (Stone Age dwelling) we found a pre-thatch civilization: 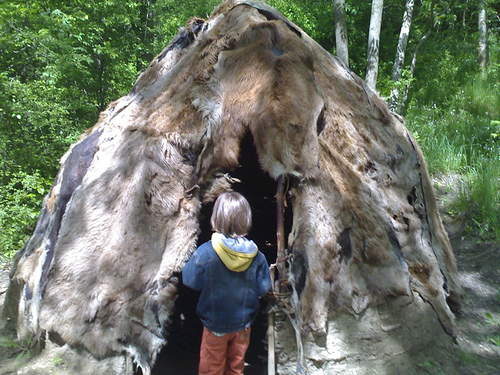 Having just learned about the wonders of iron, it was immediately obvious what not having iron left you without. Again, how would you ever understand this unless you’d just sat inside an iron age house and were now sitting in a more primitive skin-roofed dome with holes where the rain could get in”

From the stone age it was over a bridge to get back to the future. Why exactly it is that Oliver is afraid of mayonnaise, but not of rickety stone age bridges I do not know, but he bounded over this one like it was the most normal thing in the world: 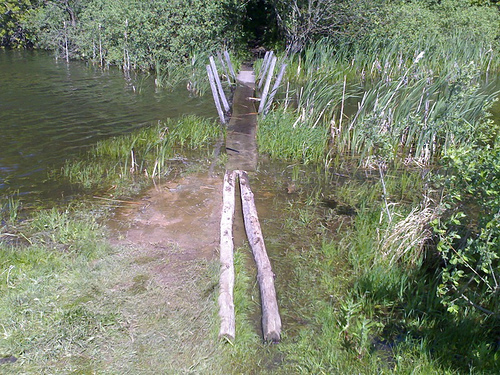 From there it was over the hill, around the bend, over another bridge, through a sheep meadow, and we were back at the dugout milling chopping area. Oliver had a helpful conversation with Sara’s guiding partner about things like “what is harder, stone or iron?” (answer: stone) and “how do you light a fire?” (answer: “come on over here and we’ll light one together”). We took another whack or two with the axes, and then to finish final ride in the dugout (with my summer camp canoe skills coming back, we did much better): 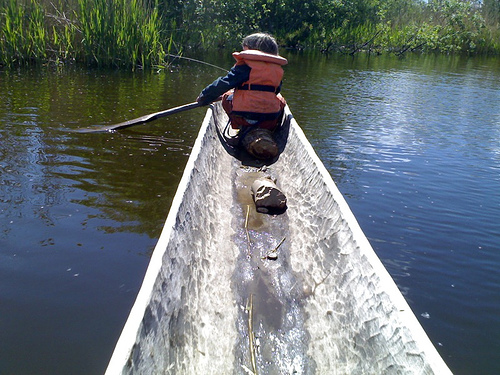 Does all this kinesthetic chopping and grinding and boating actually teach kids anything? When we got home we sat down to a dinner of cheese and tomato sandwiches on croissants. Oliver, in the way he often does, asked me “what croissants made of?” Then he stopped himself, got a twinkle in his eye, and said “that place — before — today — wheat!”.

Salmon and apple sandwiches sound great but there’s nothing like a chocolate one, available in milk or dark.

Very synergistic mix of photos and text, and the photos are pretty too. I think you’re hitting your stride multimedia-wise, P.