Back in the early 1980s, after I turned 16 and could borrow my parents’ car, I used to drive down into Hamilton to the H.G. Thode Library of Science and Engineering. Because the library building is round, because it’s located next door to McMaster University’s own nuclear reactor, and because of the library’s futuristic-sounding nickname of “Thode,” it felt a lot like driving down into the future.

My reason for driving to Thode was that they had subscriptions to both Byte and Creative Computing magazines (both published in Peterborough, NH near Yankee as it turns out). For a geekly, 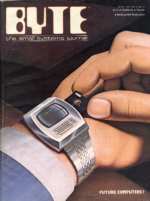 curious teenager like me, those magazines were fascinating reading, and I regularly photocopied pages of BASIC programs from their pages and took them home to type into my TRS-80 Model I.

One of the features of Byte back in the day was a column called Ciarcia’s Circuit Cellar. Written by engineer Steve Ciarcia, it was a monthly “DIY” column that showed you, say, how to make your own remote control for your television, or how to make a 1200 baud modem. Most of what was covered in the columns was way, way above my head (I could barely manage a soldering iron, and still can’t), but the notion that the technological world could be so malleable was extremely alluring to me, and I looked forward to each new issue.

Several years later, after moving up to Peterborough, I discovered Coevolution Quarterly, which grew out of the Whole Earth Catalog and later became Whole Earth Magazine (and which recently gave up the ghost). While the Whole Earth sensibility was different, it was still firmly rooted in the “DIY” ethic: self-reliance, access to tools, and so on.

I became hooked, and bought every back issue I could lay my hands on.

In the same vein now comes a new quarterly, Make: magazine from O’Reilly. My first issue arrived today in the mail, and I’m happy to report that it reads like the spiritual ancestor of both Circuit Cellar and Whole Earth. It’s about malleable technology, hacking, self-reliance, and remodelling the world. It’s a spirit I still love, and even if I don’t build a rig to let me take aerial photographs from a kite, or hack my XM satellite radio, I’ll still slurp it all up eagerly.

Make: has a weblog where you can gather their ethic via RSS. It’s a worthwhile print subscribe, though, if you share my passion for going malleable.