A small item on the front page of The Guardian from March 16, 1916 concerning the application for divorce of Major Hamilton Gault being denied by the Senate.

Follow this thread and you end up learning about a fascinating person; even just the story of the divorce – which he eventually secured – is compelling. 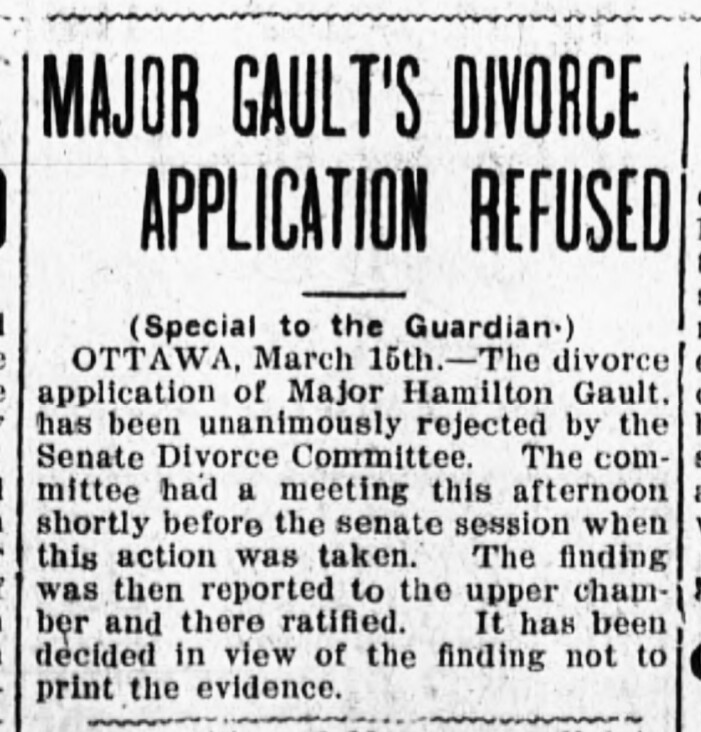 Postscript: Gault’s first wife, Marguerite Claire Stephens, the other party to this application for divorce, went on to remarry; her second marriage was to Count Luigino Falchi, an “Italian war ace.”

That marriage too ended in divorce, and after Stephens’ death her estate was disputed, as reported in the September 29, 1931 edition of the Montreal Gazette. 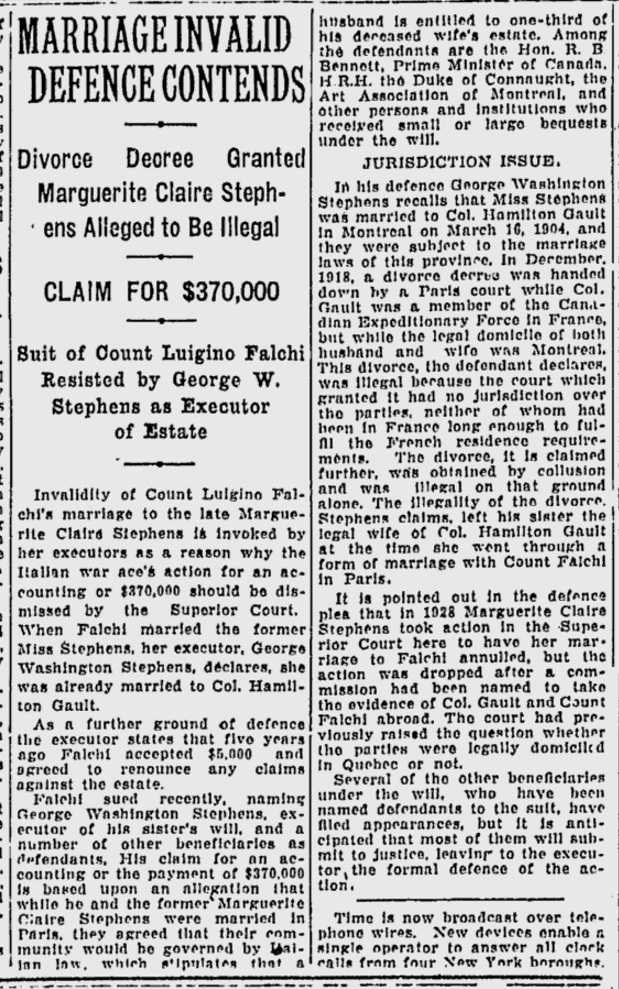 The case, wherein Stephens’ ex-husband Falchi sued the executor of Stephens’ estate for $370,000 based on his assertion that, under Italian law, he was entitled to this after their divorce; Stephens’ estate responded that, because Stephens was never legally divorced from Gault, her marriage to Falchi was invalid, and therefore he was not entitled to compensation. The case was successful, and the estate was ordered to compensate Falchi.

Stephens’ executor appealed to the Supreme Court of Canada which dismissed the appear in June of 1938 with costs, ruling that the Falchi-Stephens marriage was legal.

How did Hammie and his wife Marguerite (Stephens) Gault react to the events of May 1915?

It was the arrival of the new Governor General in 1911 that changed everything for both of them. The Duke was the King's uncle and a son of Queen Victoria. No one had more status, in Canada, than the Duke of Connaught and, by proxy, his daughter, Patricia. Marguerite quickly became good friends with Princess Patricia. As the Princess' new best girl friend, Marguerite Gault jumped into the A list.

Meanwhile, Hammie became captivated by Connaught's military staff. These were men of great military distinction. I am sure that there was much talk of the possibility of war. And that, in Hammie's case, this talk ignited a dream of playing a significant role in the war that seemed inevitable. Canada had a large militia but no regular unit that was ready for war. There were, however, many British ex-regular soldiers living in Canada. What if there could be a regiment comprised of these veterans? What if this regiment could be made ready for war as soon as it was declared? What if this regiment was to be officered by the Duke's staff? What if the influence of the Governor General could swing this with the Canadian government? What if Hammie paid for such a regiment? Such a plan had merit on its own.

The Duke had been a professional soldier for all of his adult life. He immediately supported the project. With his support, and with the support and work of his staff, the project was well-planned before war broke out. This was due largely to the quality of the men on the Duke's staff and due also to their own enthusiasm for the idea. The Duke's support and the connection between Farquhar and Sam Hughes, the mad minister for militia, ensured that it was given the green light.

The official "mascot" was Princess Patricia, Connaught's daughter and now friend of Marguerite (Stephens) Gault. She remained attached to the regiment until her death. Traditionally the Colonel of the Regiment is the Governor General.

But in spite of all of this military support, my feeling is that behind the scenes, in the early stages of the idea, it was Marguerite who pushed Hammie into this project. She had the motive. By doing this, she would no longer simply be the wife of a rich playboy who got on well with the Princess but a legitimate member of the Royal inner circle. This would be her regiment!

As a symbol of her role, she travelled to England with the regiment and also with Farquhar's wife, Lady Evelyn. Few other military wives travelled as they did. Nearly all the other 30,000 Canadian woman who came to England in 1914 had to make their own way.
Here we come to the crux of Marguerite's tragedy. Marguerite needed the regiment to serve her. She had no capacity to give to it. The regiment took Hammie away from her the moment it landed in England. The PPCLI moves to France in late December. There was no time to see the wives. We have seen that Mabel Adamson can only squeeze in one night. The Pats are in France by Christmas 1914. Marguerite Gault is on the sidelines.

On February 28th, 1915, Gault is wounded for the first time. He spends his convalescence in England fretting about the regiment. There is no emotional connection between Hammie and Marguerite. He is with the regiment in heart and in mind. In her mind, her regiment has taken him away from her. This was not her plan.

On May 5th, 1915, he returns to the front and is badly wounded again on May 8th. Also on May 8th, Marguerite learns of the death of her mother and her nephew, John. She is already worried about her brother, Chattan, who looks as if he too will die.

By May 8th, Marguerite Gault must have sensed that Hammie was unlikely to survive the war. The Pats have all but been wiped out. Hammie has been wounded badly twice. She had the very reasonable fear that the Regiment will be the death of her husband and she will soon be all alone.

In July 1915, Hammie is released from hospital. He and Marguerite are invited to go to stay and convalesce with Hammie's sister, Lillian Benson, at her house, Lydeard, in the country. Also present is Hammie's mother.

Strangely, another officer from the PPCLI, Bruce Bainsmith, the Machine Gun Officer of the PPCLI, who has also been badly wounded, has been invited too. It is here, in an English Country House, that Hammie comes down one morning in July, 1915, to find Marguerite and Bainsmith in a compromising position. No one will ever know what they were doing. But, in this context, even a kiss would be beyond acceptance.

Marguerite’s fears had driven her into behaviour that was to destroy her. Conducting a romance with a brother officer was the ultimate in betrayal. Imagine the scene. The entire house party gathers around the doomed couple. This includes other officers, Hammie's mother and Marguerite's maid. There is yelling and crying. Bainsmith is expelled immediately from the house. Marguerite leaves later that morning. She never spends another night under the same roof as Hammie. Bainsmith makes it worse by going around London telling everyone that Marguerite is leaving Hammie and will marry him. Bainsmith is banished from the regiment and joins the RFC as a pilot. He survives the war. In the terms of the time, Bainsmith is a "Cad". In Hammie's mind this was total betrayal.

Agar, who had never liked Marguerite (Stephens) Gault and who had been suspicious of her flirting, writes to Mabel on October 31st.

"I always felt confident that something was up, but thought that she would cover up her tricks. She has a very bad temper. Gault is very cheery and hard working and shows no signs of secret stress, but he has always been very secretive and self contained. The Washington Stevens (his spelling) were always a rotten lot."

If Gault could have killed Marguerite there and then, I think he would have done it. Instead, he will destroy her name. He will make her a social pariah. He files for divorce as the plaintiff. Few in her class got divorced then. And if they did, the woman was never the guilty party. Worse, the process was intensely public. For, in Canada at the time, a divorce could only be made via an act of Parliament in the full glare of the press. Hammie takes the trouble, in the midst of the war, to return to Canada to go through with this.
He fails and returns to France only to be wounded, even more badly, in June 1916. All the time, in the typical British male fashion, neither he, or any of his officers, say a word to each other about this. He presents a cheerful face to all who meet him.
Agar comments on 10th November, 1915.

"Nobody discusses the Gault affair, although all are aware of it. Martin, Cornish and I are all of the opinion that someone ought to wring Bainsmith's ugly little neck. It is quite evident that Gault is undergoing a heavy strain and that cheerfulness on his part is an effort and he rather prefers to be alone."

Finally, after the war, they do get a divorce in France. Marguerite then marries an adventurer. That marriage fails. She dies soon afterwards. Her mental health in ruins. She may have killed herself. The final indignity is that her widowed husband sues the family for support!

In 1917, with only one leg, Hammie will return again to his boys. At the end of the war, he will bring what is left of his regiment back to Canada. Before he leaves the UK, Princess Patricia will renew the colours in his presence. Here is that parade. You can see in the picture how he has to extend his leg. After the war, he campaigns to have the Marguerite removed from the centre of the cap badge. In spite of the outrage of the men, he succeeds. He finally expunges all sign of the traitor. What had been theirs is now only his. His rage at Marguerite was that strong.

Finally Hammie finds the wife he needs. He stays in England between the wars. There are too many bad memories in Canada. When war breaks out again he, like Alec, signs up. They both have the same job. Hammie is in charge of the infantry reinforcements, Alec is in charge of the armour reinforcements at Inkermann Barracks in Surrey. After the war, Hammie returns to Canada. He is at peace at last. For the rest of his life he will never be described as a rich man but always as a hero. A hero who had given all he had for his country.

Marguerite loses her man, her name, her respect, her mind and then her life.