I was browsing the call-for-apprentices for a Costa Rican radical queer jungle/farm sanctuary for post-capitalism exploration yesterday, and came across this, one of its goals:

Developing love, care, relationship and eroticism as practice rather than product.

This morning, driving Oliver around the city to drop off slices of birthday cake at a curated collection of influential contributors to his life, I thought for a moment, at a stoplight, “why am I taking this entire day to help my son carry out a labyrinthian questing that involves cakes, Zoom and vodka soda?” It wasn’t so much that I was struggling for a rationale, as I was wondering why it seemed like exactly what I should be doing.

The only reasonable answer I could come up with is that I love him. So much and so effortlessly that it would never occur to me to do otherwise on this day.

I have thought a lot about love over the last year, but this revelation on North River Road was more about feeling than thinking.

Love as practice, rather than product.

We had a good day together, me and Oliver.

We started off with breakfast on the patio at Receiver Coffee: rum & banana french toast for him, vegan breakfast bowl for me. It was sunny and just warm enough: the perfect knife-edge between summer and fall. 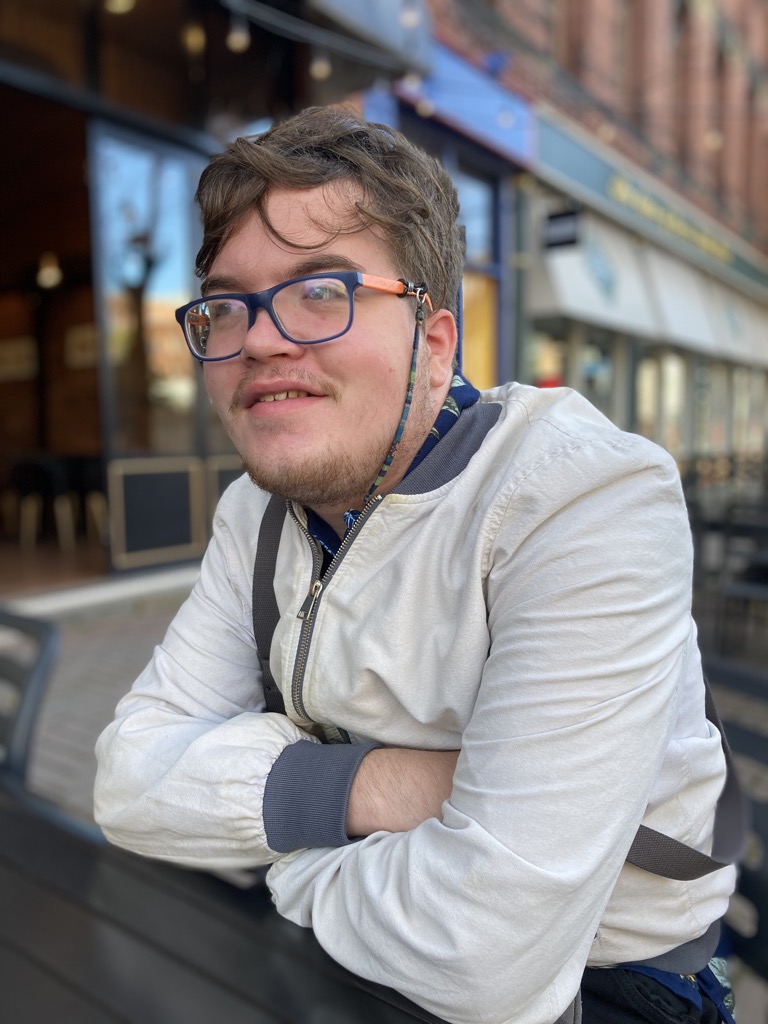 After breakfast we walked home for Morning Birthday Zoom, held for those in Europe and points east. We were joined by Olle in Sweden, Juliane in Germany, and outliers Kali in Charlottetown, and Peter in Hampton. We had a lovely chat, sang happy birthday, and enjoyed our shared sunshines.

Next it was to Michaels, to purchase cake boxes and party decorations, and then to Sobeys, to pick up a couple of cakes.

Cake number one was a rectangular chocolate sheet cake, ultimately destined to be divided into nine for distribution; we had it iced with purple Os.

Cake number two was for the small face-to-face gathering planned for the evening; it was a round chocolate-raspberry cake, iced with “Happy 20th.”

Cakes in hand, we ducked in to Madame Vuong’s for lunch (Catherine’s voice in my head: “it’s going to be a long day, so don’t forget to eat lunch!”). Then home for cake slicing and boxing.

Cake boxing was perplexed by my inability to divide a rectangle into 9 (I started down the road to making 6 pieces, then caught myself at the last moment). Thirty minutes later we were on the road again.

On the “people from nearby who would get cake delivered” list were nine destinations: Prince Street School, Birchwood Intermediate School, Colonel Gray High School, UPEI, Stars for Life, the Provincial Palliative Care Centre, and three friends who’ve undergone transitions of one sort or another recently.

Our questing thus involved, among other things, negotiating the COVID regulations of the public school system, being serenaded with Happy Birthday by the administrative assistant at Prince Street from the front steps of the school, visiting Palliative Care for the first time since the night Catherine died (and getting a tour of the grounds from Blanche, who’s been so important to us over the last year), and leaving cake, anonymously, on the doorsteps of a couple of people who will, no doubt, be confused when they get home.

None of this made any sense at all to my neurotypical brain, but it made a heap of sense to Oliver and, of course, Oliver was right by any measure that involves human connection: we saw people and places we hadn’t seen in a long time, brought smiles to faces, and spent a couple of hours on an adventure together.

Besides, having to phone an elementary school office and explain how it is important to your son, who turns 20 today, to drop off a piece of cake at the school he once attended, and to have people get that, and agreed to meet him at the front door for the cake handover: that’s the kind of thing that makes the world seem right.

Deliveries complete, we rushed home so that Oliver could take in his British History lecture at 4:00 p.m., stopping at Hearts & Flowers for balloons and at Upstreet for party beer en route.

While Oliver learned about the 1906 Labour Manifesto on Zoom, I decorated the back deck, and then headed off to the liquor store to buy wine, and the corner store for chocolate milk.

The wine and chocolate milk were in service of two last-minute additions from Oliver, drink specials:

Thus a drink menu was in order: 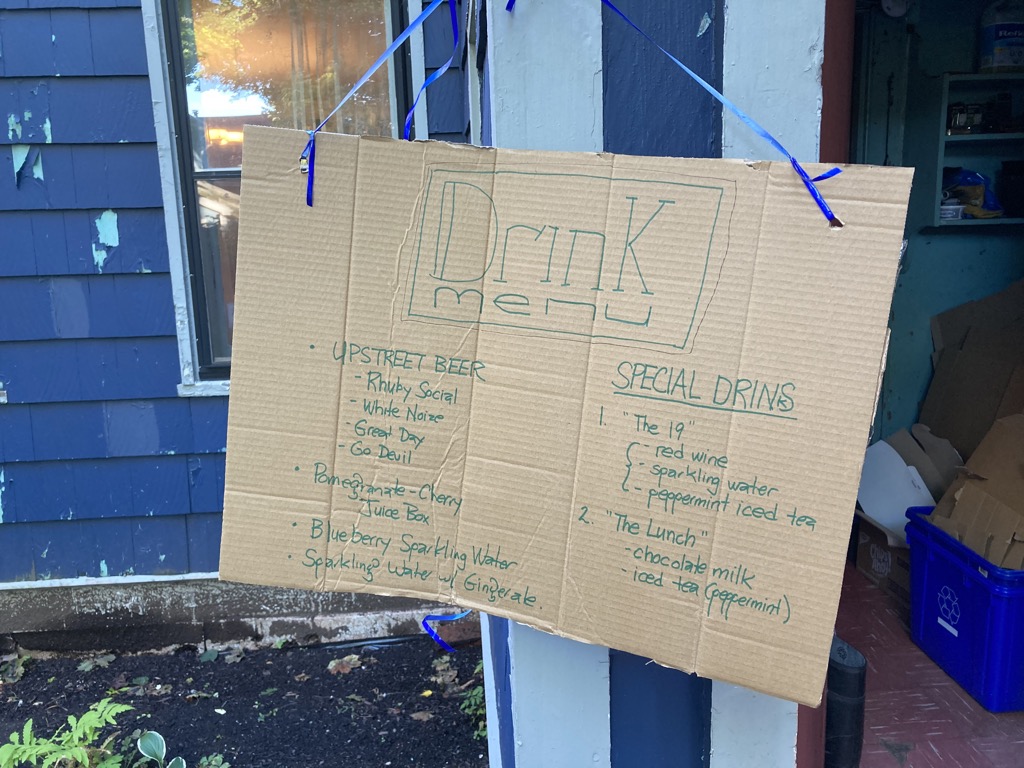 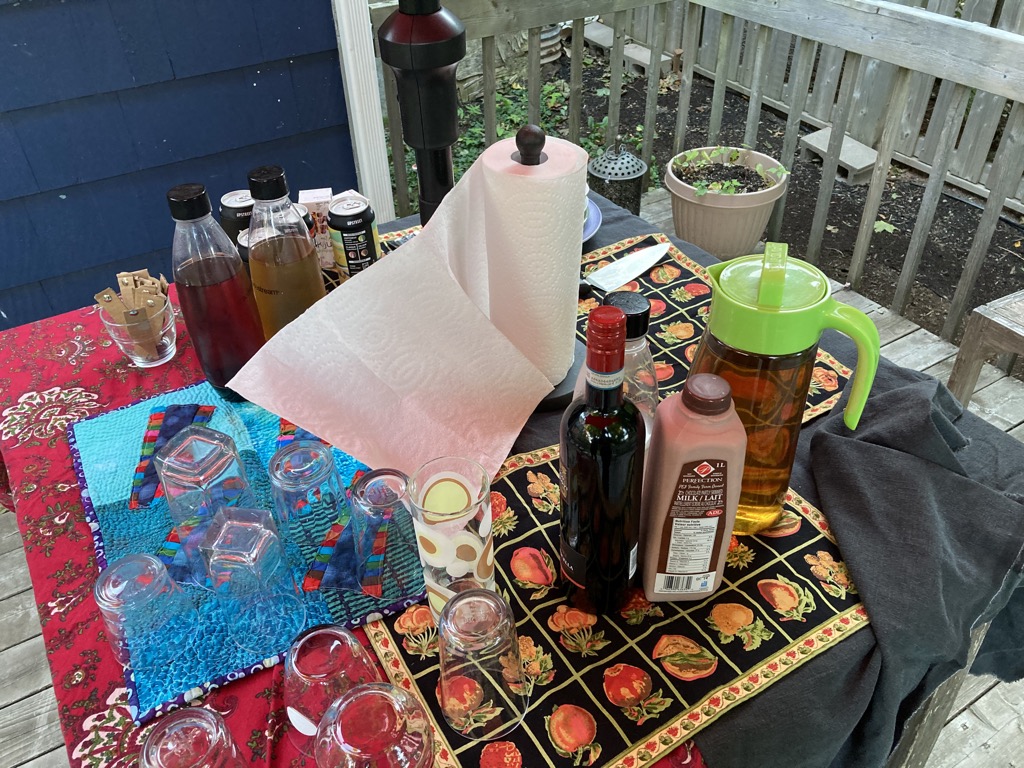 Upon my return home, and the finish of the lecture, Oliver added some additional quests to the list: Oliver Trivia, “Ton-style Questions,” and Oliver’s Interests, each of which required some attention by me and some typing by Oliver. We finished those up, hooked the Google Home up as a playlist speaker in the back yard and had a few minutes to relax before our first guests arrived.

Under the letter of “the new normal” COVID dictates released today, we were allowed a wild socially distanced rager of 20 people; I opted to limit things to 9 people, as otherwise we’d run out of chairs and plates and social distancing space. The question was then “which 9 people” (remembering that this is a young man who had 50 people at his 18th birthday). Oliver rose to the occasion, not an insignificant feat given his challenges with winnowing: he opted to celebrate “the teen years” by inviting important people from his education.

And so gathered in our back yard after 6:00 p.m. were his grade 7 and grade 9 home room teachers, his two educational assistants from high school, his current UPEI professor, and two of our closest friends. We were a motley bunch, but we were united in our connection to Oliver. We drank “The 19” and “The Lunch.” We played Oliver Trivia, told Oliver stories, answered Ton-style questions, and caught up on the months or years since we’d last seen each other.

I almost forgot to bring the cake out; fortunately Oliver reminded me. And so we sang the second Happy Birthday of the day, and enjoyed a (surprisingly very good) cake. As we said our goodbyes, darkness had fallen and the Full Moon was just starting to rise.

As I cleaned up the deck, Oliver was warming up Birthday Zoom Two, the North American edition. This included Oliver and Cheryl in Portland,  Johnny and Kae, and nieces A. and M., in California, my mother, Mike and Karen in Burlington, Steve and Monique, and nephews V. and E., in Montreal, Marina in Napanee, and Sandy here in Charlottetown. We all got a chance to hold Oliver in high regard, got a chance to make (or renew) ties (“oh, you’re Riley and Bailey’s mother: we met you at Rainbow Valley when Oliver was little”), and enjoyed Happy Birthday Mark 3.

During early planning sessions with Oliver for this day, on a lark I added “father and son drink at Upstreet” at the end of the schedule, not realizing that at the end of the day I would be exhausted. But once something’s on the list, well, it’s on the list. And, besides, we needed to have supper (I forgot to listen to Catherine’s voice in my head telling me to not forget to have supper). So we got take-out chicken wings and a veggie burger from Hopyard, ate them on the patio at the Jean Canfield, and then looped back to Upstreet for a vodka soda (Oliver) and a kombucha (me).

As we rolled home the Moon was high overhead, we were in a fine mood, and were in agreement that it had been a day well-spent. 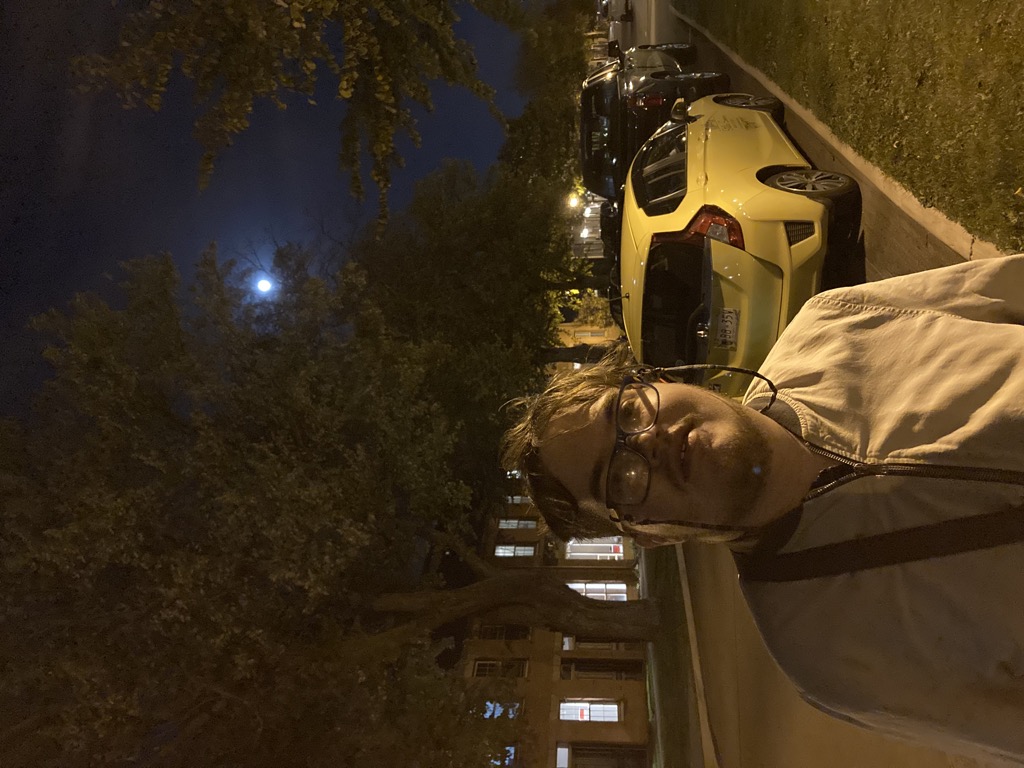 What an awesome way to celebrate Oliver's 20th. I have mostly been rubbish at celebrating my birthdays, disliked it for long periods as well. Oliver, you're setting a new standard here.

And I'm intrigued now, what are my-style questions? The prompts like we did at the start of the unconference at E's 40th? And what were the questions?

Prompts, Yes, What is a place that you would like to live that is not PEI?
What is the best thing that you did this week?
Who is your favorite Neighbour?
If everything could be only one colour what colour should it be?

What a great way to celebrate love, life and the people that are part of it. Thank you for sharing this.

This is beautiful. I learn so much from you both. Happy birthday, Oliver!

A grand quest, especially when dropping off pieces of cake to people who don't know they're a part of the quest. And getting cake to the folks in the Places Of Import, ah, so welcome.

Holy mackerel, I was exhausted just reading this. Well done Peter and Oliver, you guys know how to fill a day with wonderful things. And it's hard to believe that time flies so quickly -- Oliver is 20!

This blog post is a beautiful reminder that when we write or speak we do so to communicate or express. Those are ways of transporting things. Ways of propelling things. When we write from love we impart love and anyone who reads it, feels it, gets it.

What a beautifully planned and executed celebration. Happy birthday Oliver! (Also, I just can't imagine what peppermint and wine tastes like together. Should I try it?)

Yes, It tastes good together.

I love everything about this. HBD Oliver!

What a great celebration! Happy belated birthday to Oliver.

Wowzers! Y'all recounted some of these things at Zoom #2, aka Party #3, but I did not really grasp the enormity of the day. The enormity of your love for Oliver, well, that came through perfectly. Though so lovely to read about it like this!