I was in my friend Catherine Hennessey’s house yesterday, helping her find out why her Facebook had mysteriously started communicating to her in Brazilian Portuguese, when I spotted a copy of John Croteau’s book Cradled in the waves: the story of a people’s co-operative achievement in economic betterment on Prince Edward Island, Canada sitting on her dining room table. Curious–I’d heard Catherine and her posse referring to Croteau in venerable terms for years–I picked up the book and paged through it.

Spanning the endpapers I found a beautifully-illustrated map of Prince Edward Island: 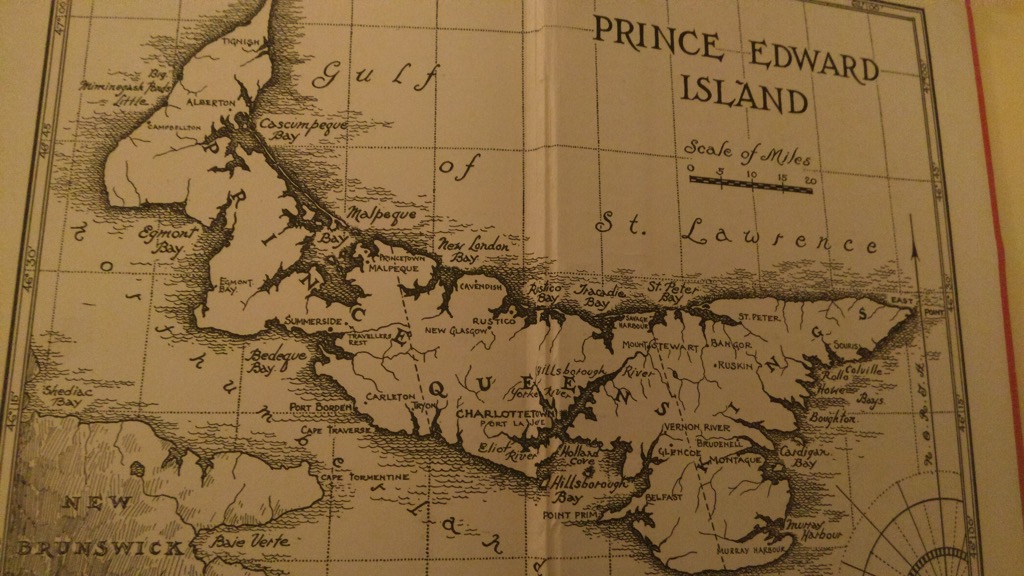 My eye was immediately drawn to northern King’s County where I spotted, just under Bangor, a place named Ruskin, which I’d never heard of before: 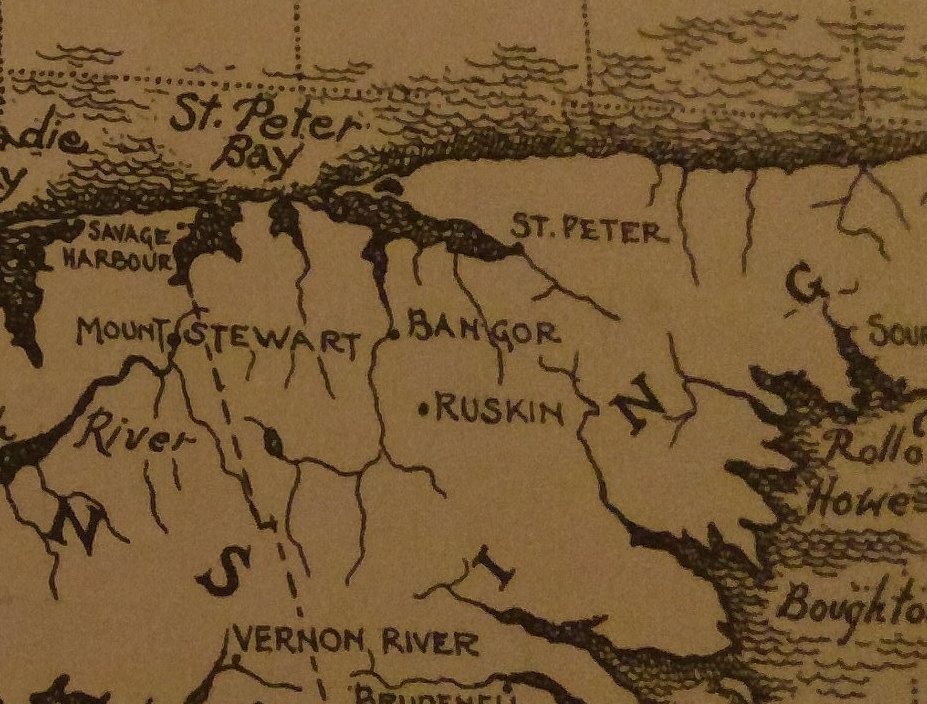 This is one of my favourite areas of Prince Edward Island. My first visit there was many years ago when I needed to go and visit a young cobbler who’d set up home and shop in a house off the Bangor Road. On the journey there–drive to Morell, turn right, drive forever–I was struck by how unpopulated the region was. In a province where you are not often out of sight of the signs of human habitation, you can drive for miles on the Bangor Road and see only forest, fields and scrub before emerging, far down the road, into what, by comparison, seems like decidedly urban Cardigan.

The notion that The Lost City of Ruskin lurked somewhere along that route was intriguing.

So, what of this Ruskin?

The 1973 book Geographical names of Prince Edward Island has an entry on page 107 for the place:

Comparing this 1973 book to the 1925 Place-names of Prince Edward Island with meanings, we find disagreement on the where, but confirmation of the place being named after John Ruskin:

While he’s not mentioned by profession here, John Ruskin the art critic was indeed born in 1819 and did indeed die in 1900.

This notion of Ruskin being named after John Ruskin the writer runs contrary to what was reported in Over on the Island, the 1939 book by Helen Jean Champion. As Champion takes the reader on a ramble through King’s County, we come to Ruskin at the end of chapter 7, “A Plague of Mice” (emphasis mine):

Farther on lies Ruskin. I wonder what that great apostle of art would say if he could see his family name representing a district on Prince Edward Island. The place, however, is not named after the famous writer; it is named after John Ruskin, an early settler. Even so, if the great critic ever spied his name on this map, I am sure he would put one thumb in his waistcoat, and assuming the attitude typical of a lecturer, he would begin an address to his dear unknown friends:

Wherever art is practised for its own sake, and the delight of the workmen is in what he does and produces, instead of in what he interprets or exhibits—there art has an influence of the most fatal kind on brain and heart, and it issues, if long so pursued, in the destruction both of intellectual power and moral principle; whereas art devoted humbly and self-forgetfully to the clear statement and record of the facts of the universe, is always helpful and beneficent to mankind, full of comfort, strength, and salvation.

John Ruskin, the critic, retires, and John Ruskin, the farmer, takes his place at the plough and forgets, if, indeed, he ever knew, the principles which this great teacher has laid down. And Ruskin, the district, goes on with its daily work, unconscious of the great and illustrious name it bears.

There is a paucity of Ruskin, PEI scholarship otherwise, likely because what was once a place that people were from is now just a stretch of road.

So the question remains: was Ruskin, Prince Edward Island named after an English essayist, or an Island farmer?

I loved this trip into Ruskinia and hope you find out more. Just grabbed my copy of Over on the Island (1946 reprint) and it has the same map as the Croteau! Forgot how much I liked this book.