In what is either the most or least brilliant acquisition of my life, I’ve purchased a Golding Jobber No. 8 letterpress, a press that looked like this back in the day and that weighs about 1,000 pounds more than the tiny Adana Eight Five I’ve been printing on for the past year. 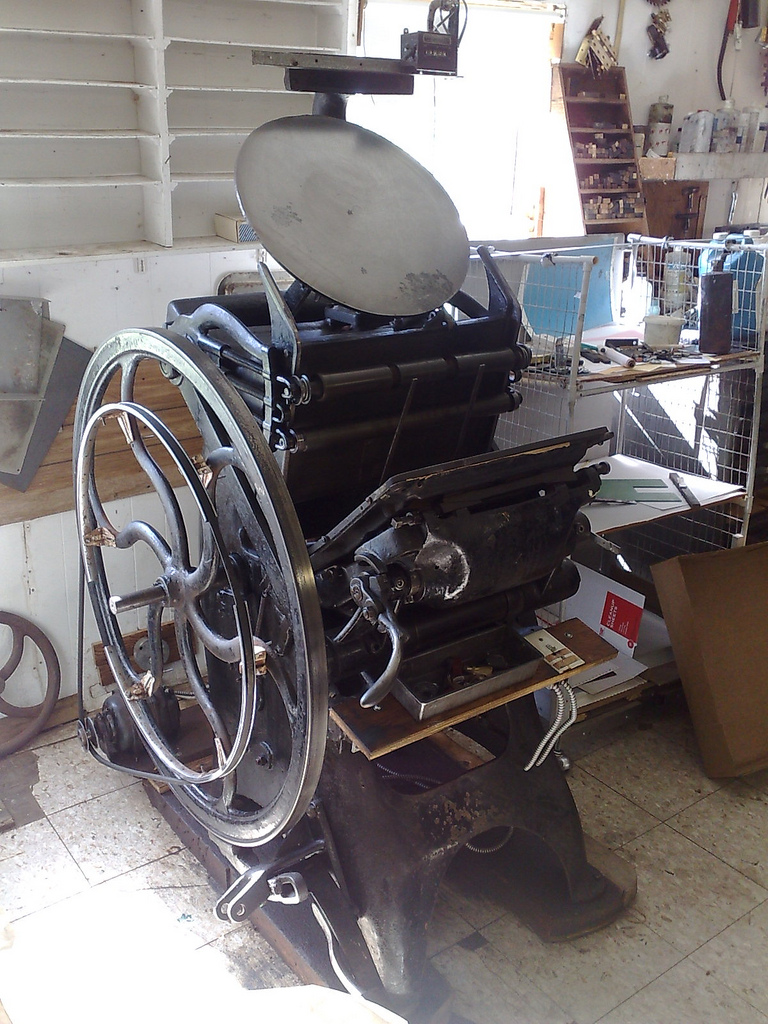 Golding Jobbers are big to start with, and the No. 8 is particularly so; John Falstrom, the self-confessed “Golding nut” who helped me identify the model, called it a “BBBBBBBiiiigggggg press.” And it is: not only does it weigh, well, more than I can possibly conceive of, but it will print up to 15 by 21 inches.

In other words, were I to employ an army of printers, I could set and print a modest daily newspaper with it.

This is, at least right now, much more letterpress than my amateur needs dictate, but letterpresses don’t come on the market in Prince Edward Island very often (this is likely the last one of this size to ever come of the market), so I had no choice.

But now I need somewhere to house it.

Worst-case scenario, I’ll put it into storage until the right space comes along, but it would obviously be preferable to move it once, so I’m actively seeking a suitable rental location:

I’m also open to renting a larger space and relocating my entire office/shop operation there (which would require slightly less grungy space, and 400-500 square feet with washroom), or to purchase rather than rent if a fantastic space came along.

If you’ve got space to rent please get in touch with me; if you know someone who might, please pass this post along.

I never watched the Waltons, but Claude was reminded of this .

Have you considered the possibility of creating a public letterpress showroom/workshop-type thing? I imagine that could form the basis of a someday-bustling Charlottetown artistic drop-in space.

I want to see you set type like Bill Campbell.

I’ve found a space for the press, at least as a temporary home, in a basement on Queen Street. While dream of olde tyme print shopesque spaces will have to wait, it’s a solid concrete floor, has heat and light, and enough space to let me work. Moving day is tomorrow.

Too bad you can’t get the old Irwin Printing Company Limited building at 5 Richmond St. About as “olde tyme print shopesque” as you can get. Looks to be falling on hard times, though, and I doubt its floor would survive this behemoth.

I’ve already spoken to Eddie Rice, who owns the building. He told me that it’s not suitable for use, and that it’s slated to be torn down and the site redeveloped. You’re right: it would have been a great spot.