For the last few months Oliver and I have been in the habit of going for a walk every night after dinner. Our house is only a few blocks from the waterfront, and our walks usually take us through Confederation Landing Park either coming or going.

Earlier this week we headed out as usual, down Prince Street toward the park, until we were stopped by this sign: 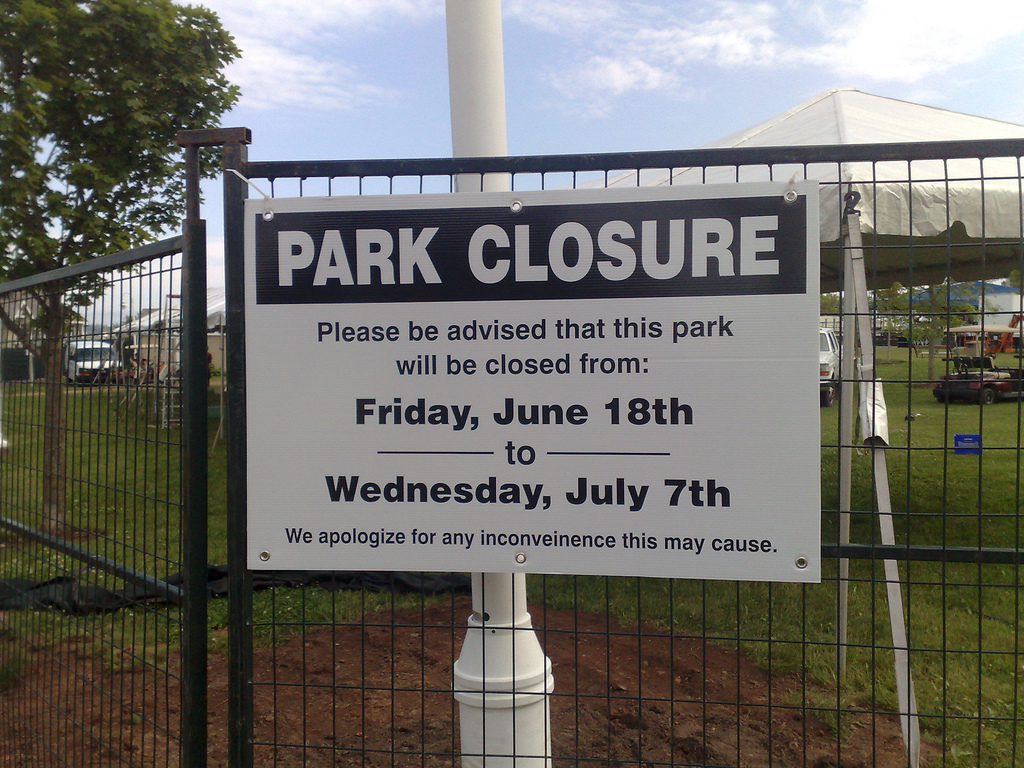 Confederation Landing Park, it seemed, was closed. And not just closed for the day, or for a weekend, but for 19 days in a row.

Regular readers will know that there’s no love lost between me and the various rock festivals that happen yearly on Charlottetown’s waterfront: over the years we’ve become used to a July 1st weekend full of very loud music and neighbourhood disruption.

While I remain unconvinced that sacrificing the quiet enjoyment of the neighbourhood at the alter of tourism is prudent public policy, at least these interruptions have been restricted to a weekend and the day or two before or after the events for setup and teardown.

Summer is short in Charlottetown. Confederation Landing Park, especially for we downtown residents, is a pleasant waterfront oasis, and we’ve only a short time to enjoy it: there are basically 10 weeks – 70 days – of summer in Charlottetown, and this closure means that the park is closed to the public for almost 30% of that time.

The City of Charlottetown is rightly proud of its city parks system: parks are a vital resource for quality of life. They are important. They’re an integral part of our daily lives as citizens. They aren’t a “frill” that we dip in and out of, they are part of civic infrastructure, like roads, water, and policing.

When a large public park like Confederation Land gets closed for almost a third of the summer, the message that citizens are sent from the City is “public parks are important, but only some of the time.”

It seems the activities we’re encouraged to engage in when the park is open – walking, running, enjoying the view, playing catch, whatever – are suddenly downgraded in civic importance when something better comes along: “sorry, Billy, you can’t play ball this month, the rich tourists from away need the space.”

It is just like the G20 lock down in Toronto — impressing strangers by fencing out the locals.

I’m missing a key piece of the story: *why* is the park closed?

Maybe this is quibbling and beside the real point, but I would argue that “summer” in PEI is slightly longer than 10 weeks. It’s been summery for a couple of weeks at least, and in my mind summer stretches well into September — one of the warmest, sunniest months in PEI. Parks are just as enjoyable at 15 degrees as they are when it’s 25 degrees.
However, your point is taken. This seems to be an excessive amount of time to be closed for festival preparations. Perhaps after Cirque de Soleil gets a season under their belt at this location they will be able to shorten their setup time.

Perhaps in a spirit of anarchic buffoonery you should gather a group of friends dressed in brightly-coloured lycra and tear down a section of the fence, all the while doing handstands, cartwheels and juggling routines. I’m looking at you silverorange.