I’m sitting in the back room of the LimoLiner, the “luxury” bus from New York to Boston. Here’s a shot of me talking to Steven via AIM: 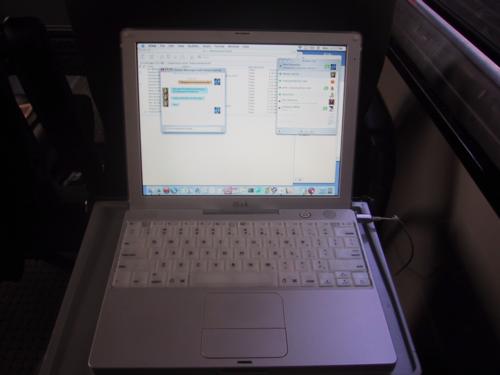 And here’s me, my iBook, and the Bronx: 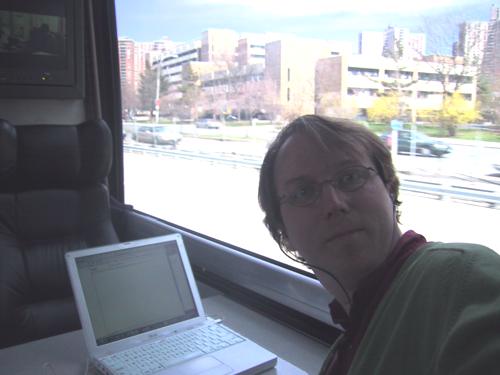 The “luxury” on the bus is mitigated somewhat by the inevitable bump, bump, bump of the bus. This makes typing on the iBook something of an extreme sport.


The WiFi connection, which uses some sort of voodoo to get to the Internet, isn’t exactly broadband. It claims to range from double the speed of dial-up to DSL, depending on location, but I’m getting something near dial-up speeds, and it does fade in and out, although now that we’re out on the highway it’s pretty solid.


The bus itself is a little rough around the edges: there was no water in the washroom sink (apparently you have to wait awhile after the toilet flushes); there a lot of crosstalk on the onboard sound system (I can hear engine noise, and, from time to time, AM radio, through my headphones); and the snack offered was more like Air Canada circa-1990 than “executive class.”


I’ll write more when the trip is over.

If you could read the IM conversation on the screen there, it would go something like this:

When I was driving from New Orleans to Biloxi on I-10 last week my buddy received a continuous wireless signal for almost the entire distance — some type of private network that I can’t remember the name.

Are US cell providers now broadcasting wi-fi from their towers? Either that or it was something beaming out of NASA’s Stennis Space Centre…

PASSENGER BEWARE!!! I had a very SCARY and COSTLY experience on LimoLiner. When I boarded, I took my wallet out of my bag to retrieve my license for the attendant, then put it away. My seat tray didn’t work, so I asked if I could switch seats. The attendant agreed, but she refused to let me take my bag, which wasn’t very big. She told me it’s LimoLiner’s policy that a passenger can’t move a bag to another seat when the bus is in transit. (I later found out there is no such policy. She fabricated this policy!!!) She directed me to move to another seat, which I did, then she brought my bag over a few minutes later. That was the only time I didn’t have my tote bag in my possession; in fact, I rested my feet on my bag throughout the whole trip. When I stepped off the bus to retrieve my keys, I noticed my wallet was missing. After I checked the contents of my bag in my car with no luck, I tried to return to the bus to look for my wallet but the bus was already leaving. When the on-call manager finally got back to me the next day, he said the attendant didn’t know anything about my wallet (What a surprise!)and they weren’t responsible. No apology for my bad experience — nothing!!! They didn’t bother to investigate even though the attendant was the only other person on the bus who knew where my wallet was and she fabricated a story to get me to leave my bag behind with her when I moved to a new seat. If you must use LimoLiner, safeguard your valuables!!!