On the lawn in front of the Coles Building just around the corner from our house is a collection of rocks. Or more properly boulders. There is one from each province in Canada, and a little brass plaque in the ground in front of each identifies their province and geological name. 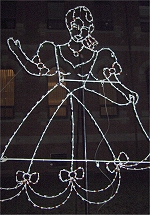 I know nothing of the history of this endeavour, but it’s always struck me as a nice, simple idea. Of course as the son of a geologist, I am somewhat biased in this regard. But still, in the Nintendo age, a group of 10 boulders is, well, grounding.


Now it used to be that there was a very nice pathway that wended through the boulder garden. It was one of those very pleasant pathways made of a very pleasing material that wasn’t a “point A to point B” kind of path by rather a “take you on a tour of the boulders” kind of path. Because the route from our house to the coffee shop and Radio Shack and various other important institutions cuts through the boulder garden, I was a frequent visitor. And, of course, I took my father there several times for a sort of “cook’s tour” of the rocks.


Thankfully the boulders themselves were left in place. However without a pleasant pathway, they are marooned in a sea of green grass. They are no longer a collection.


Why was this done?


Well, at least on the surface, it appears that it was simply to allow for the expansion of the aforementioned light glut. Specfically to provide room for for section of the light show that


If we can take any consolation from this at all, it is that planted squarely in front of Ms. Peep is a large chunk of Ontario gneiss.

As I see the story playing out, the marauding wild wagon, pulled by the irritated and thus bucking elk, is about to trample Little Bo-beep, as her way is impeded by a hulking boulder from Ontario. Beep survives the ordeal, of course, but emerges from her recovery some months later to open a small petting zoo on the outskirts of town with the elk as a featured attraction. She never returns to downtown Charlottetown. The gneiss, on the other hand, does what it’s always done: it just sits there.


Unfortunately, that’s the only comfort I have.

One of the sad truths implicit in your entirely correct observations is that there are no PEI myths / tales which could have been chosen to show via the light orgy. Why Bo-Pee, western wagons and elks are used (a) in relation to Xmas and (b) in relation to PEI is mystifying — unless of course if they are being bought off the shelf somewhere and not custom made. Being a Maritimer and not an Islander (the latter condition as I have been informed of numerous times), it is astounding to me that this part of the Maritimes is uniquely so unaware of its own real history in a public sense. The bizzarro world of the “accepted myth” centers on the three pillars of fake Victoriana; fake and bowlderizing LM Montgomery rural imagery; and the centrality of the myth of the “first” Confederation conference [at which nothing occurred except the derailing of maritime union]. The accepted myth ignores Acadian history, Mi’kmaw history, all of pre-Confederation european military and colonial administration activity and the real experiences of those Scots and Irish forebears who colonized the Island. A light show that actually spoke of the real and rich history of events of PEI’s past might be interesting or even impressive. Without an interest in knowing the facts, we who live here (Maritimers all, some Islanders) will be subject to the “Bo-s, elks and wagons” in more contexts than just the light show.

Just so you will not think me an utter nabob of the neg., I would suggest the following reasonably mythic themes of PEI history do exist but are not celebrated:

1. The overcoming of the absentee landlords — not the 1775 or so Patterson land grab of land owner from land owner but the later transformation of PEI from a serfdom to independant land owners. Perhaps still too much a work in progress to be a myth? The legacy of restricted liberty is still traceable.

2. The ice boats — access to and from the place was a death risking adventure…this is the island’s equivalent of the dangers of the seal hunt. Surely there are folk tales in these events. Especially when you could not get on an ice boat to the mainland without a piece of paper confirming you had no debts to local powerful families.

3. The silly events of the powerful — the self-destruction of the paterson who was destroyed after stealing the heart and corporeal balance the [wife / daughter in law] of the Chief Justice; the 1860’s PEI colonial militia; the “battle” for the Island between England and France. Making fun of those in authority is a pre-requisit for these myths gaining popularity.

4. The survival of the Acadians — in 1758 there was an expulsion here. 4500 Acadians lived on the Island. 1500 got to Quebec, 1500 lived to get to France in the English boats, 1400 dies on the way to France and 100 stayed and survived in the woods. Those 100 form the basis of the present population. How they survivied should be an amazing story well known.

Pete: lovely story. I’m going with your version until someone, with similarly approachable deftness, articulates an alternate mythology for my consideration.