…why is it that the expensive centrepiece of our primary secular and religous holiday consists of a illuminated duck drinking from an illuminated champagne fountain?

Finally the Capital Commission has come to its senses; here’s a clip from a story running on the CBC Prince Edward Island website (emphasis mine): 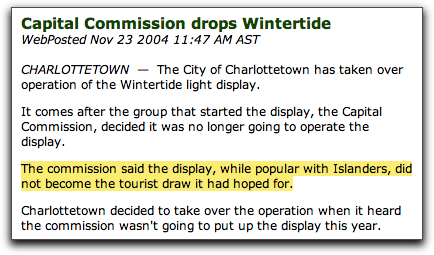 Give them a few more years and they’ll have Founder’s Hall converted to something useful, and Nickelback banned from the waterfront.

And here I was planning to come back to see the Christmas Swan.