Don Jardine has been posting up a storm on his Our Island Climate site of late, including an item today about a 1963 lightning strike on Trinity United Church, our neighbour just down Prince Street.

The full story from the September 3, 1963 edition of The Guardian, written by George Condon:

Lightning struck Trinity United Church in Charlottetown with the force of an explosion at the height of a storm Saturday and left damage in its wake affecting the entire city.

Trinity itself suffered damage which will run into several hundreds of dollars while neighbouring homes were bombarded by flying brick and pierced by lightning.

Cars in the street were battered while power lines and transformers were burnt to a crisp, causing power failure through most of the city and surrounding districts.

The fury of the lightning was so great persons in most parts of the city, some a half-mile or more away, though[t] the bolt had struck in their immediate vicinity.

The storm began without great fury. It was not until approximately 3:30 p.m. Saturday that it struck with all its force. The sudden crash of thunder was heard for miles while the flash of lightning ran from Southport to the western section of the city. Almost an inch of rain drenched the area at the same time.

The lightning bolt which struck the church hit with such force that brick-chips from the chimney at the centre of the east wall were found as far away as Grafton Street. The chimney itself disintegrated while lightning tore through the building and out the other side.

The Henry Wooldridge residence, next door at 203 Sydney Street was pelted by falling brick and sustained three holes in the roof and broken windows as a result. The lightning passed right through the house shattering a salt shaker held by Mrs. Wooldridge.

Damage to the Church included the destruction of the rear chimney and nearby brickwork, smashed wall boards and shingles, a rafter split tom the peak of the roof to the eve, loosened bricks and stones on the walls, and curling of the lead flashings at the inside ridge of the roof.

Damage to the church’s electrical system is still undetermined but it is known that many fixtures were shattered, wires were burnt and fuses blown. There were no services in the Church on Sunday.

Sidney Street resembled a war-time scene with great chunks of rubble and broken glass lying about.

M[r]s. Henry Wooldridge, standing over the stove in her kitchen next door, thought there had been an atomic blast. “The windows started breaking and the lightning came right in the back door and out the front,” she said.

As the lightning passed through her kitchen it struck the salt shaker in her hand, scattering the fragments in all directions and stunning her for a second.

LUCKY TO BE ALIVE

“It seemed to come in through the back door and over to the stove. The whole stove was sort of blue and a big flash came down from the light socket. We are lucky to be alive,” she said.

Damage to the Wooldridge home included broken windows, holes in the door, loss of power, including the destruction of the electric motor in their stove, and piles of rubble in the yard.

A hugh slab of concrete missed the house by inches and crushed a wooden tool box Mr. Wooldridge had in the yard.

Sarah VanIderstine, 83, who lives across the street at 200 Sidney, left her chair for only a moment, but when she returned there was broken glass all over the floor and a brick was laying on the chair.

A Volkswagen car belonging to Roger MacLaren, 205 Sidney Street, had the roof pushed in and the rear window of broken by falling brick. Fred Roberts lost the rear window of his car. A New Brunswick car and at least one other vehicle also received damage.

A gaping hole appeared in the roof of 205 Sydney St. where a bolt of lightning passed through.

Power was disrupted for hours as wires in the immediate vicinity were down and a transformer in the Federal Building was damaged. Power company linemen responded to over a hundred calls in and around the city.

Lightning was seen to be dancing along wires, the top of the new Confederation Memorial structure, and Woolworth’s in the city, and as far away as the Southport Country Club.

Residents saw the lightning which struck the church signalled the end of the storm here.

The story was accompanied by this scene of Sydney Street: 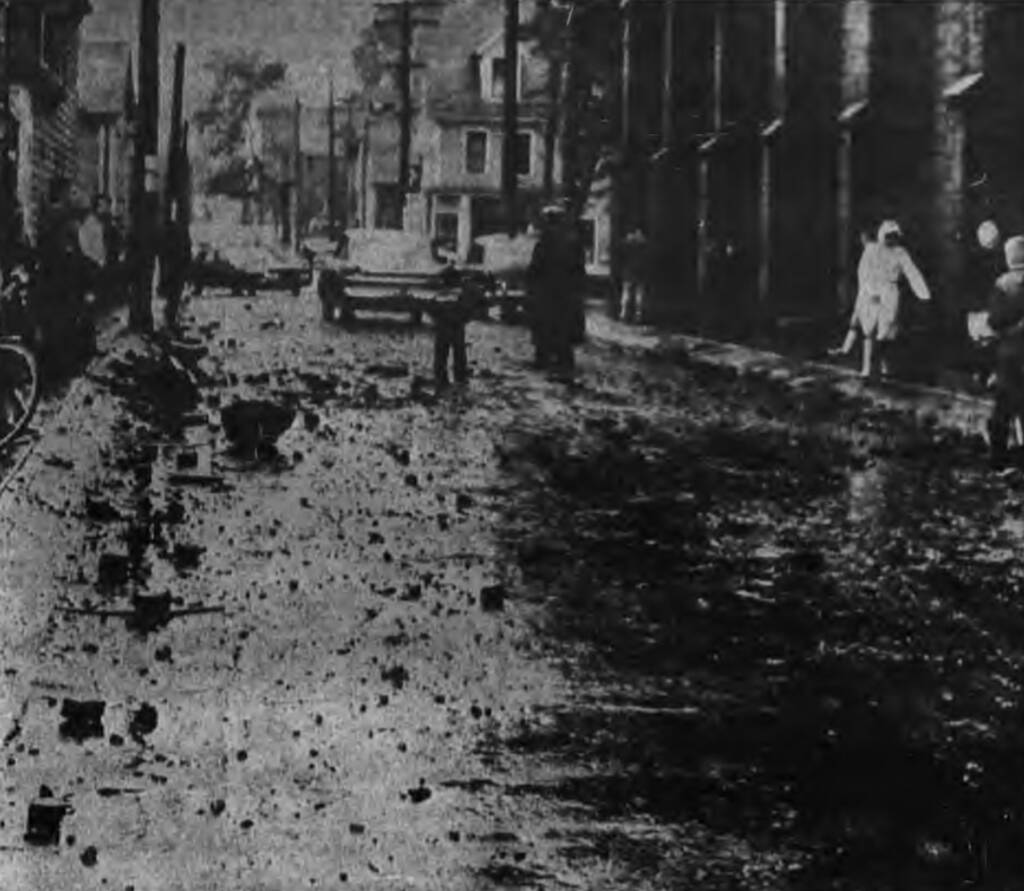 Thank you, Peter, for sharing a piece of local history. This is an excellent mentor text to use for an upcoming writing lesson; students will be enthralled. We’ll be sure to cite the original source properly.
I hope you have a lightning rod?!