My friend Dave asked a question on Twitter this morning that produced a veritable torrent of replies: 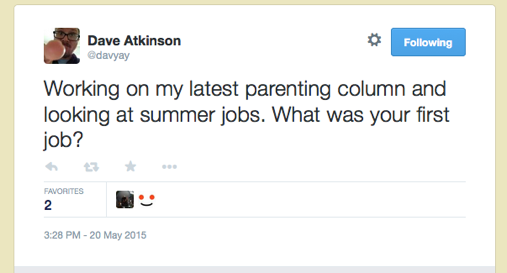 My friend – let’s call him Fred to protect his identity – had a job pumping gas at the Sunoco station across from our high school.

One day at school he told me about this scheme he’d worked out. Most people paid with cash in those days, and it was before the advent of “self serve,” so he pumped gas for everyone. When customers paid with, say, a $20 bill, he would go back to the office for change, and return with change for $10 instead, pocketing the rest for himself. If the customer protested, he would simply apologize and hand over the difference, claiming ignorance. I don’t think he ever got caught, and I imagine that his take from each shift could have amounted to a couple of hundred dollars (although I suppose the owner would have noticed the difference in the cash register at some point, so he must have had to moderate his take).

What shocked me about this when I first heard it was not the crime itself.  And although it did surprise me that Fred, who I’d known since we were very young, whose birthday parties I’d gone to as a kid, would engage in such pursuits, it wasn’t that either. It was simply the realization that such things were possible, that anyone would even consider such behaviour. Until that time I’d considered crime – and generalized dishonesty – to be the stuff of movies and other places; the notion that it was possible to simply be garden variety dishonest was a revelation to me.

I had a similar reaction when, on a YMCA youth group trip to Banff, one of our older counsellors shoplifted some sponge toffee from a candy store, and emerged to brag about it, with the implication that he did this kind of thing all the time. This was someone who I’d looked up to for a long time; a model of leadership, I thought.

The notion that this guy – this guy – would be casually criminal is something that I find deeply disturbing to this day.

Was everyone I knew engaged in a part-time life of crime?

In this light perhaps Dave’s next question should be “What was the first crime you committed?”

I’m not sure it would produce the same torrent of replies, but whatever it did produce would no doubt be compelling.

That's a great idea. I will most certainly ask it. I had a similar incident when my childhood pal, also named Fred, exposed his criminal side. We'd dragged an old chicken coop from his family farm back into the woods, cleaned it up, and turned it into a cabin. One weekend when I showed up for our usual camp-out, he pulled out several bottles of booze, which he'd stolen from locked trailers at a local campground. I couldn't believe it, because I'd literally known him since we were five.

At 5 or 6, I gleefully pushed over a large trash can in a provincial park and ran off without notifying my parents. Then a second and a third. I am not 100% sure littering laws were on the books in 1989 and whether that constituted a single crime or a spree

Thankfully, for recompense, my parents enrolled me in the Scouts Canada program where I would spend a few dozen hours of my youth cleaning trash from a highway. The universe will find you and get you somehow.

I used to spend a lot of time on the roof of the old Charlotteown Forum and to avoid being caught or 'squealed on' I went alone. It was peaceful up there.

Vividly remember stealing an action figure from Ms. Chang's kindergarten, because I wanted to play with it at home as well as school.