On Saturday night I arrived at The Guild with a full kit: toolbox, varsol, paper towels, rags, and a giant sledge hammer (purchased from Rogers Hardware on the day they closed for good many years ago). On the other side of the basement there was a gaggle of well-dress patrons of the arts sipping wine and admiring paintings during the intermission of The Attic, The Pearls and Three Fine Girls, something seemingly at odds with my plans for sledge hammering, but I was assured, on assuming my tenancy, that the building is soundproof enough for this not to be an issue.

After an hour of heaving and shoving and sledging, I ended up with the press reassembled: 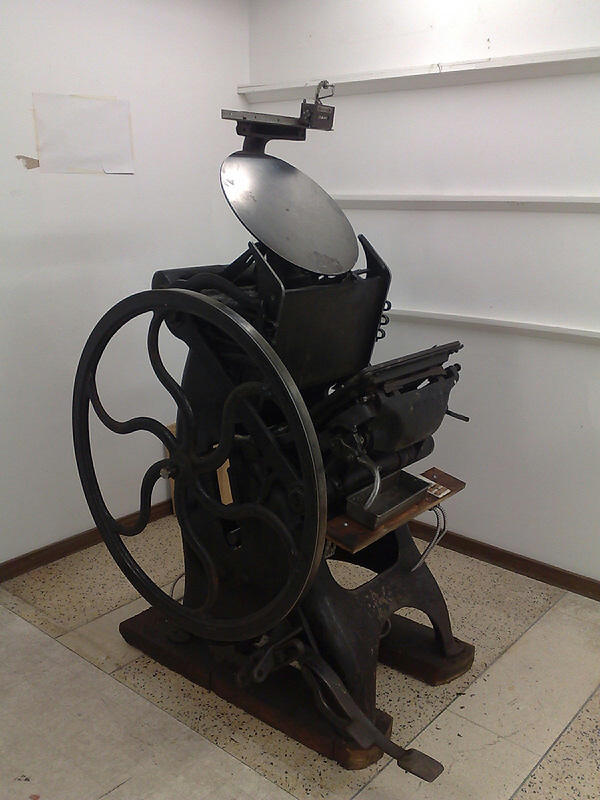 I reattached the flywheel and the ink disk and its supporting arm as well as the foot-pedal brake (I have to talk to Ian Scott about making me up some sort of leather add-on for the brake to prevent metal-on-metal braking).

There’s an issue I need to figure out with the flywheel and its axel: things aren’t running as freely as they should and I think it’s because the axel needs to be moved further to the right; to do this properly, however, I need a way of shifting the position of the small gear on the press’s righthand side further onto the axel. I’m sure there’s a way of doing this, but my digital mind is at its limits; fortunately Cousin Sergey is a metalurgist and jack-of-all-trades and I’m hoping he can help.

I have been thinking today about functionality and beauty and I must say that press is a perfect ecample of something that has both.