One of the great promises of the digital world is held out to be the power of discovery afforded by “if you like this, you’ll like this.” This is the bedrock upon which Netflix, Spotify and Amazon are built.

And, for the most part, it’s never worked for me.

At this moment, for example, Netflix is recommending, in part, these movies to me:

Thanks, but no thanks, Netflix; who exactly do you think I am?

The same thing happens with streaming music: I’ll start up some variation of a “Bruce Cockburn station” and a few minutes later Lynyrd Skynyrd and Springsteen and Jethro Tull start showing up in the rotation and it’s all downhill from there.

Doesn’t the Internet understand what it is about Bruce Cockburn that I like is more subtle than “old rockers”?

I am happy to report, however, with the combination of Rdio and Lennie Gallant I have found a stream that, were it a real radio station, could brand itself “Your Perfect Music Mix.”  Here, for example, is what’s been streaming into my ears this afternoon on the “if you like Lennie Gallant, you’ll like this” station:

Not a bad track or artist in that mix, and I’ve been streaming that station, with the same results, for hours and hours.

It seems, somehow, that Lennie Gallant’s magical musical glue-that-binds has a filter that makes him the nexus of a universally great music universe.

So, if you’re within a few degrees of separation from my musical tastes, tune your Rdio to Lennie Gallant and prepare to be entertained. 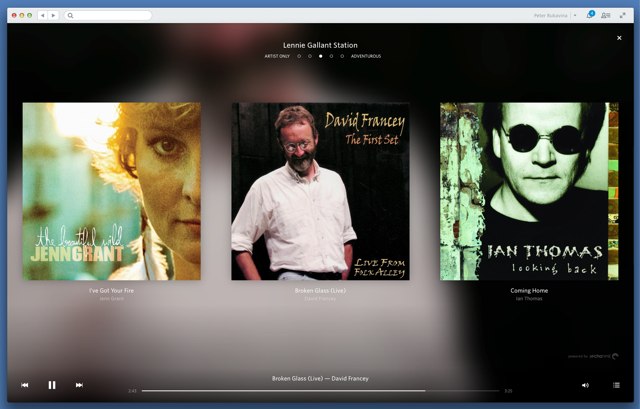 Sounds perfect. I’m brushing up on my French for a trip to Europe in April and have been listening to his two French albums, both are quite excellent.