As I type it is still pre-dawn (okay, it’s actually 9:00 a.m., but the blind is closed) on Sunday morning. Catherine and Oliver are still asleep. We’re hunkered down here at the Formule 1 hotel in Limoges, about a third of a way up from Montpellier to Paris on our slow ride home.

We spent Friday in a whirlwind of linen laundering, floor scrubbing, and shutter shutting as we worked to clean and close the house for departure.

Oliver and I made our last trip to the boulangerie; I told the woman there that it was the last day of our trip, and said something resembling “thank you for your excellent products” to which she responded “thank you for your excellent patronage.” The chocolate croissants were still in the oven when we arrived, so we had to be satisified with regular ones on our last day, appropriate because that’s how we started off. 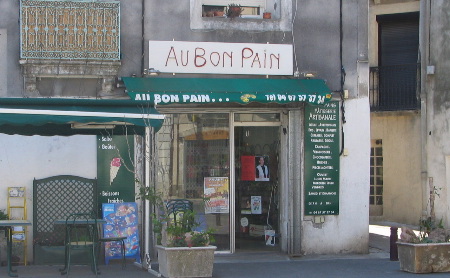 We went through a similar scene at the Point Coop, our favourite grocery store. We bought oranges and hand soap, and thanked the winking grocer for his store. He asked me if I was from Belgium, which I took as a compliment.

By noon we were ready to go. House was clean from top to bottom, shutters shut. All of Oliver’s toys gathered up and the truck packed. We found our woman on the ground, handed over keys and payment for electricity, and headed out of Aniane. I’m almost certain we’ll be back.

We had planned to spent the previous night planning our route north to Paris — we have almost 5 days to drive the route. Unfortunately a wonderful meal got in our way, and so heading down the road to Gignac we had no idea of our destination.

Earlier in the day, having coffee at the Glacier, Catherine got some advice that the western route, through Limoges, was much nicer than the eastern route, through Lyon. From two parties. That sealed it. We headed north to Millau. I was secretly glad of the opportunity to see the super bridge — the Millau Viaduct — one more time. I was not disappointed.

We decided, as we had driven over the bridge on our way down, we would drive down into Millau proper and see it from below on our way back up. This was an immediate lesson in why they built they bridge in the first place as a drive over the bridge takes about 10 minutes compared with a trip of perhaps an hour down into the valley, through Millau, and back up the other side. Apparently in the middle of summer this is a two hour trip; a couple from England I talked to in Millau said that the bridge now made it possible to drive from the north coast to the south coast in one day, something they’d not been able to do before.

The only defect with our Peugeot Partner truck has been that its headlights were aimed much too high; every time we’ve driven at night we’ve been “flashed” at by half the drivers we pass. Catherine insisted we do something about this, so we pulled into the Peugeot dealer, and I conducted a complicated mime exercise in which I explained the problem at the end of which came an exclamation something like “oh, you want your headlights regulated, but of course!”

The truck was ushered into a bay, a complicated looking headlight aiming machine brought out, and 15 minutes later we were on our way. No charge. Very nice shop. If you need your Peugeot serviced in the south of France, go to Millau.

Of course we had to stop to take pictures, the best of which was perhaps this one, taken from the edge of a subdivision up a hill in suburban Millau: 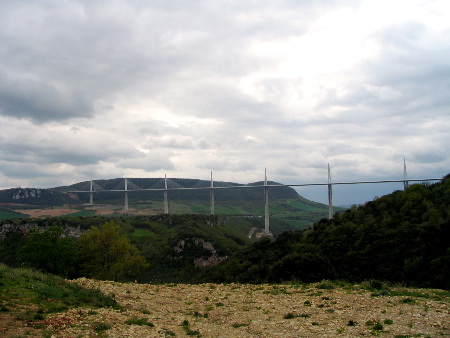 We headed back up the other side, Catherine marvelling all the while at how the local farmers could plow fields on a 45 degree slope (she took as many sloped fields pictures as I took of the bridge; you’ll have to look to her blog to find those).

Our tentative plan was to head west to Rodez at exit 41.

At exit 43 we realized we’d gone to far. Rather than doubling back, we decided to head out overland on a third-class road and see what we could see. As it turns out, this took as right up the valley of the River Lot (confusingly also called the River Olt, it seems), then up into the mountains on roads that, if you know PEI’s “scenic heritage roads” you will be familiar with, and finally, about an hour later, out to Rodez.

From there we headed north on the N140, and when it started to get dark we started to look for a place to spend the night.

We ended up at a hotel-restaurant under the shadow of the hilltop town of Capendac. For 50 euros we booked into a double room that gave Oliver three beds to choose from (and thus many “Goldilocks” games) and his own shower. We had a view of a chicken farm tucked into the bottom of a mountainy hill. It was very serene.

We took dinner at the hotel restaurant and in doing so experienced, after 23 days, what was our first meal in a “French” restaurant.

The menu was somewhat difficult to decrypt, as the emphasis was not on the food itself but on how it was prepared, so there were lots of confits and other verbs that we were unused to.

We settled on two of the stock menu, each offering a soup, appetizers, main course and dessert.

I settled on the faux filet de boeuf after extracting from the waiter that it was a the filet that was faux and not the boeuf. Catherine ordered something involving canard which we cleverly recognized as duck (it turned out to be three duck legs, which was confusing).

We both started with a salmon tartare (which I’ve only just learned now from Catherine was raw salmon; it was very good nonetheless), and I plunged in and ordered escargots de la maison, reasoning that if I was ever going to eat snails now was the time.

Eating snails is not conceptually different, in the end, from eating mussels or lobster. Indeed the taste is somewhat similar. Snails are, however, more cuddly than either mussels or lobsters, and thus it feels more like eating a trusted friend. I survived. It was actually kind of pleasant. Oliver, not aware I think of what he was doing but eager nonetheless, had one himself. He liked it.

The main course was rich and tasty and involved pounds of butter. For dessert I had the best chocolate mousse of my life, Catherine had a pear and chocolate pie and Oliver had, as you might expect, pistache ice cream.

All of the staff at the restaurant were very accommodating of our naivete, and we emerged feeling rather victorious.

Saturday morning we woke up to a misty, chilly day. After a quick breakfast at the hotel we checked out and headed up to the mountaintop walled village of Capendac-haut, reknowned for having held out against Julias Caesar at some point in the past. It was easy to see how, as the village is very high up a hill, surrounded by rivers on two sides, and circled by a thick high wall. We toured the village, had a coffee and hot chocolate, and headed off on our drive north.

In no particular order, the day saw us: not buying a door knocker at an antique shop that was priced a 700 euros, stopping at a large flea market in the town of Martel (no doubt run by Pat Martel in his spare time) where Catherine ended up buy two door knockers, eating too much vegetarian pizza, experiencing two great playgrounds, and covered about 300 km. We ended up here in Limoges where Catherine rested while Oliver and I bought running shoes, ate at Mcdonalds, and came back to the hotel to fall fast asleep.