The plot of approximately 25% of Hollywood romantic comedies goes something like this.

Then something happens – husband starts drinking, wife becomes head of multinational corporation, child lost in typhoon – that causes their love to be tested. Couple separates, then divorces.

Husband stops drinking and starts an inner-city youth group, or wife resigns from corporation to become a bread baker.

Then one day, on the steps of the New York Public Library, they meet again. “How have you been?”

They go for coffee. That same old spark is still there. Cue the Billy Joel ballad. Roll credits.

Here in Charlottetown we awoke up to a headline in our morning paper “Homburg International buys Holman Grand”: 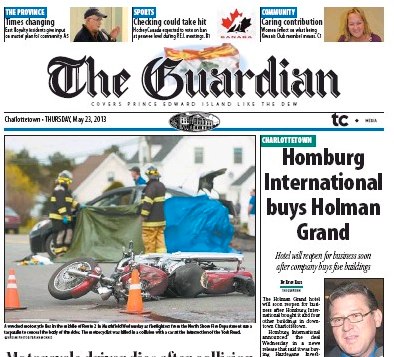 Richard Homburg, international businessman, impresario and megalomanic, a man who built a real estate empire in Charlottetown – a skyscraper, a hotel, a shopping mall – and then lost it all, has returned triumphant, reacquiring everything he lost.

He has a new name – Homburg Invest has been replaced by Homburg International – and a sassy new attitude: “we look forward to contributing valuable and successful properties, and relationships, in the community of PEI,” he’s quoted as saying in the paper this morning.

Richard Homburg is back, baby, and he’s ready for us to love him again.

And the strange thing is, maybe we’re ready to love him back.

Has anyone ever really understood why Homburg, if he is as high-flying and succcessful as he would like everyone to believe, would set his sights on reimagining downtown Charlottetown? Surely there are better places to make money than running a boutique hotel in a city that shuts down for 8 months of the year, a shopping mall that’s never really worked the way it was supposed to, or a skyscraper that’s mostly empty.

Now that the adulation of Islanders is gone, the shame of failure endured, can there be any explanation for Homburg’s return other than that he loves us?

Maybe it’s time for we Islanders to look into our hearts, realize how lucky we are, and welcome him into our arms.

“How have you been?”

“It’s been hard. I really loved you. I cried for months when you left. And then one day I woke up and realized it was time to move on. And so I did. One step at a time. But, you know, there’s always been a part of me that knows that I’ll never love anyone like I love you.”

Homburg has a lot of nerve showing his face in Charlottetown. Oh I forgot, Richard hasn’t the first clue what grace and humility is. A**hole

To know him is to hate him. Arrogant b@stard.