Five years ago in Montreal, on a trip to celebrate my brother Steve’s wedding, Catherine and Oliver and I had lunch at Cluny ArtBar on 257 rue Prince; I described the place like this:

A little out of the way, but worth the walk. Very nice room, excellent food, pleasant service. Their coffee is fantastic and the tiny Belgian chocolate mousse is a perfect dessert.

Last Friday, my mother, Oliver and I found ourselves in Old Montreal looking for lunch after a tour of the Musée de l’imprimerie du Québec and so, to save ourselves the curse of choice, I suggested we walk over to rue Prince and have lunch there again.

It turns out that in the intervening five years the space had turned over, and was now a restaurant called Le Serpent. In the process, it had become a considerably more sophisticated restaurant and one that likely, in the natural course of affairs, we never would have sought out.

But by the time we knew this we were being seated and menus were in front of us.

And what a meal it was.

My mother and I both had the salmon, served over a bed of potatoes, which was excellent, and Oliver had the risotto nero with cuttlefish, stracchino and fennel; from his eager consumption thereof, I intuit that his was equally good.  The wine list, longer than my arm, was sufficient to lure us into having a glass of wine, sold by the glass for $6. We finished up with coffee and Oliver had the maple pudding, biscuit Breton with olives and compressed apple for dessert.

The service was transcendent: friendly, helpful in unexpected ways, welcoming of Ethan without question; a model for others to follow. 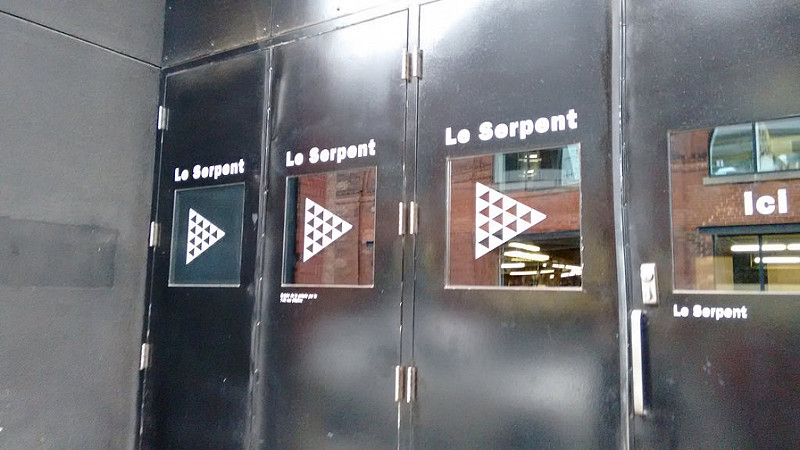