After checking out the big hole and making sure that Tai Chi Gardens wasn’t open yet, we continued down Pownal Street toward the water. It was a beautiful, sunny, crisp day.

In front of the Royal Canadian Legion there were about half a dozen cardboard boxes filled with books and CDs, and resting on top was a copy of The (Last) Whole Earth Catalog.

It wasn’t clear from the position of the boxes whether they were being put out to the trash, or in transit – there were about 2 feet in from the sidewalk in an ill-defined no-mans land – so I wasn’t comfortable with just picking up the Catalog as my own and walking on.

So I picked up the Catalog and walked into the Legion.

Spotted a man walking out of the banquet hall: “You know anything about those books out on the lawn?” I asked.

“We’re hauling them to the library,” he replied.

“Wanna sell this one?” I asked, holding up the Catalog.

“Sure. Just go and talk to those ladies in there,” he said, pointing toward the hall. Inside I found three women clearing up from what looked like the end of a yard sale.

(Oliver, meanwhile, was cowering at the entrance; I don’t think he knew quite what to make of the Legion).

“The man out there says you might sell me this book,” I said.

“Certainly,” they exclaimed, in unison.

“How much do you want for it?”

“A dollar,” said the woman behind the bar. You could tell from the reaction on the faces of the other women that she’d spoken too soon and too low.

“Do you have change for a twenty?”

This was an unexpected turn of events, and they were obviously (pleasantly) surprised. Not only did they give me my $10, but I walked out with a couple of (very tasty) chocolate chip muffins, a half-dozen peanut butter cookies, an invitation to their concert on June 1 and several rounds of thank-yous.

The Whole Earth Catalog is a powerful book, and you gotta be careful of maintaining karmic balance when it changes hands. 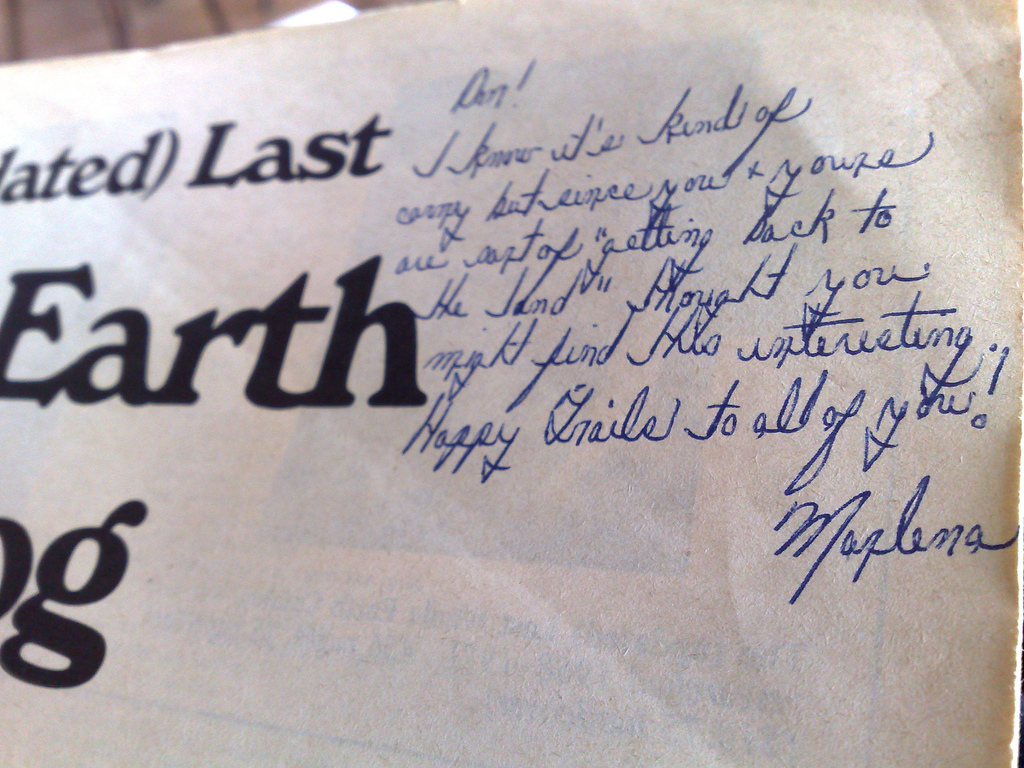 I remember seeing the commencement speech by Steve Jobs at Stanford. He mentions the Last Whole Earth Catalogue.

“When I was young, there was an amazing publication called The Whole Earth Catalog, which was one of the bibles of my generation…. It was sort of like Google in paperback form, 35 years before Google came along. It was idealistic and overflowing with neat tools and great notions.”

Here’s the video of the speech: