In this CBC report about downtown Charlottetown parking there was mention that the developer of the proposed new downtown hotel, Homburg (emphasis mine):

…wants a new parking garage, built either next to the Charlottetown Hotel or on land behind the Queen Street Parkade. City council rejected that idea this week.

Here’s the area in question: 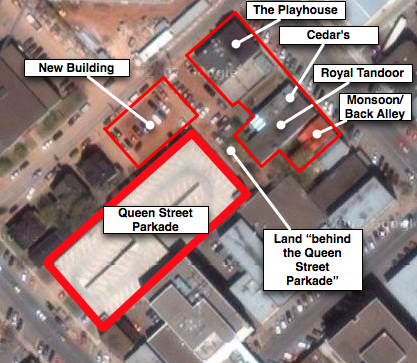 Without tearing down at least three buildings, those housing Cedar’s, Royal Tandoor, Monsoon and Back Alley Records, as far as I can see there is no “land behind the Queen Street Parkade” on which a new parking garage could be built, other than the thin strip that’s currently used to dump the existing garage’s snow.

Am I missing something here?

I think that’s why the idea has been rejected.

You’re not missing anything. Because the Queen Parkade is not capable of supporting additional floors, the developer would like the city to consider buying and/or expropriating the properties you highlighted and expanding the parkade to the east, right to University Ave. This idea was rejected by council a long time ago, but we’ve been asked to reconsider it (we declined to reconsider). I put up quite a fuss about it actually. I think it’s a ridiculous idea, for a number of obvious reasons.

My primary concern in this regard would be the loss of low-end retail/commercial infrastructure. After losing the block above to the Jean Canfield Building, and with the loss of Johnny’s Mayfair last winter, the downtown core’s stock of places that can play host to entry-level businesses is shrinking.

Good for you, Rob.
It’s a colossally stupid idea.

I do have to disagree with Peter, however. There are LOTS of empty stores that would make excellent entry level sites for businesses — the whole block from the tech centre to Kent St. is now vacant, as an example.Not to mention all the storefronts that a certain pair of obstructionists won’t rent to anyone…