Last last week Oliver and my mother and I visited the exhibit La bibliotheèque, la nuit — “The Library at Night” – at the Bibliothèque et Archives nationales du Québec in Montreal.

We weren’t really sure what we were in for, but the keywords “Alberto Manguel,” “Robert Lepage,” and “360° video immersion technology” were enough to get us to book tickets.

Which is how we ended up walking into a recreation of Manguel’s own library, set up in the basement of the Grand Bibliothèque downtown, on Friday afternoon at 4:30 p.m.

After an introductory exposition — in French, so the signal to noise ratio for us was low, but the general idea was “libraries are great!” – we were told to open the hinged benches we were sitting on and remove virtual reality headsets. These turned out to be Samsung Gear VR units, which are, in essence, a headset wrapped around a commodity Samsung mobile phone.

With some instructions on how to operate the headsets – again, in French, so we had to fumble along and then ask for help – another door opened and we were ushered into a simulated forest of birch trees, filled with solid tables and swivel chairs of the sort you would find in a well-outfitted old library. The lighting was subdued and the tone hushed and reverent.

And we were then left to our own devices to explore the virtual worlds that had been created for us, 10 libraries from around the world.

The UI of the headset was a little tricky to figure out, but eventually we did: we were presented with a series of icons, spread out at eye level inside a virtual representation of the same simulated birch forest we were actually sitting in (thus a virtual simulation of an analog simulation). Each icon represented a different significant library, some contemporary, like the Library of Congress in the USA and the Parliamentary Library in Ottawa, and some recreations of lost libraries, like the Library of Alexandria. To visit one of the libraries you simply stared at the icon long enough and were then transported there, into the middle of a scene playing out around you – all around you, in 360 degrees.

The quality of the virtual reality was awe-inspiring: there was no lag as I moved my head around: I looked up, and there was the ceiling; I looked down, and there was the floor (only that my feet weren’t there, which was the only disconcerting aspect of the constructed reality). People moved about. Things burned down. Someone played the cello. It was the first demonstration I’d ever had that it was worth donning a clunky, ugly set of head-goggles to experience, in a surprisingly visceral way, another place and time.

We spent about an hour wandering about the libraries of the world: the narration of each library, which played along as one moved about, was helpful. I learned about the destruction of the National Library in Sarajevo, the whale skeleton that forms the spine of the Biblioteca Vasconcelos in Mexico City, the copy of Birds of America at the heart of the Parliamentary Library collection in Ottawa. I missed one of the ten recreations, a fictional “Nautilus library” from Jules Verne, but I found my way to the other nine.

It was an enjoyable, revelatory, educational experience, a rare piece of evidence that digital technology affords opportunities that analog technology could not, in any way, reproduce. That it was done with a sense of flair and theatricality, and in the heart of a lovely library itself, was even better.

The exhibition runs through August 2016, so you have plenty of time to plan a visit. 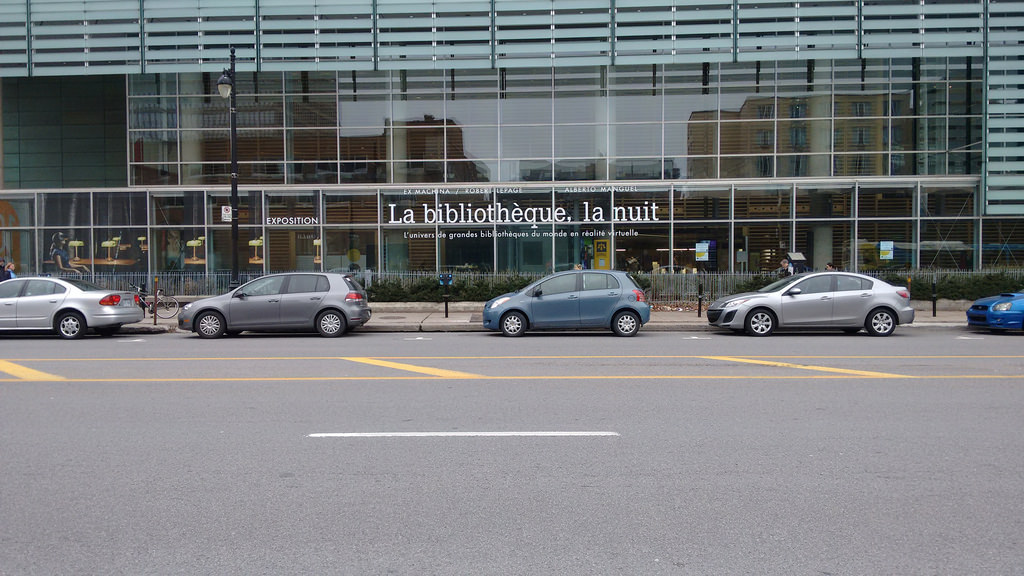