At 8:10 a.m. this morning on the dot Oliver and I headed off up Prince Street toward Prince Street School for his first day of Grade One. On the way up the street we were the recipients of waves and shouts of congratulations; I also received a healthy share of knowing looks. We got to the school at 8:23 a.m.; two minutes to spare.

At 8:25 a.m. the first bell went off (except it wasn’t really a bell; it was more like the soft gong one hears at the Metropolitan Opera to signal the end of intermission) and Oliver headed into the throng. They told us at parent orientation night back in the spring that we shouldn’t cry — sets the kids off with the wrong attitude about school, apparently — and I just barely succeeded. 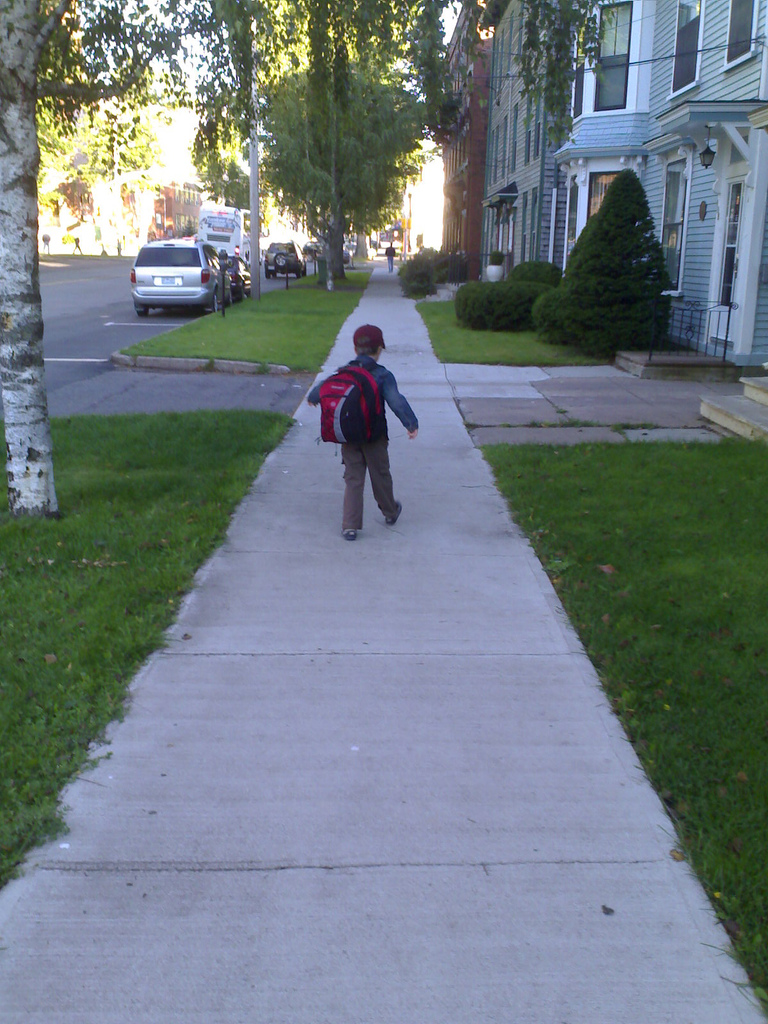 Looks like a pretty big backpack on Oliver. Please be careful, and make sure what is in the backpack is only what he really needs for the day, as a pack with 20% or more of a child’s weight can cause long term damage.

The nice thing (one of many) about being Oliver’s friend (as opposed to his parent) is that I can just sit here and cry my head off. I am so proud of him today! I talked to him about school yesterday and he was cool as a moose. He’ll do well.

Oliver’s backup was extra-specially heavy this morning because he was bringing various first-day-only accouterments with him; in the normal course of affairs he’ll be traveling much lighter.

Postscript: I went with Catherine to pick Oliver up. He did fine, ate all his lunch, has a very nice teacher.

Seeing the photo of your son head to school gave me an instant lump in my throat and teary eyes. Who knew parenting could play such havoc with one’s emotions.

We all walk in Oliver’s shoes, each and everyday.

Ohh just you wait, new parent. You will spend the rest of your life saying good-bye…to baby shoes and baby talk and the lovely child they were when they were four. That’s the thing they don’t tell you — if you’re a good parent, you spend your time teaching them to live without you. It’s HARD,

Congratulations Oliver — I heard of his first day from one of your little school friends. I’m very happy for you Oliver — have fun in grade one cat… you’ll love it.