Back in June at our Pecha Kucha one of the audience, a nice man from New Brunswick who had driven over just for the event, mentioned the print shop at King’s Landing historic village north of Fredericton as a good place to drop in on for one such as me interested in letterpress.

My trip over to Fredericton this week afforded me an opportunity to do just that: on Tuesday morning I took the beautiful drive up the Saint John River from Fredericton north to Prince William, arriving around 11:00 a.m. to a slightly soggy and seemingly almost-deserted village. I paid my $16 admission, grabbed a map, and made a beeline for the Print Shop. 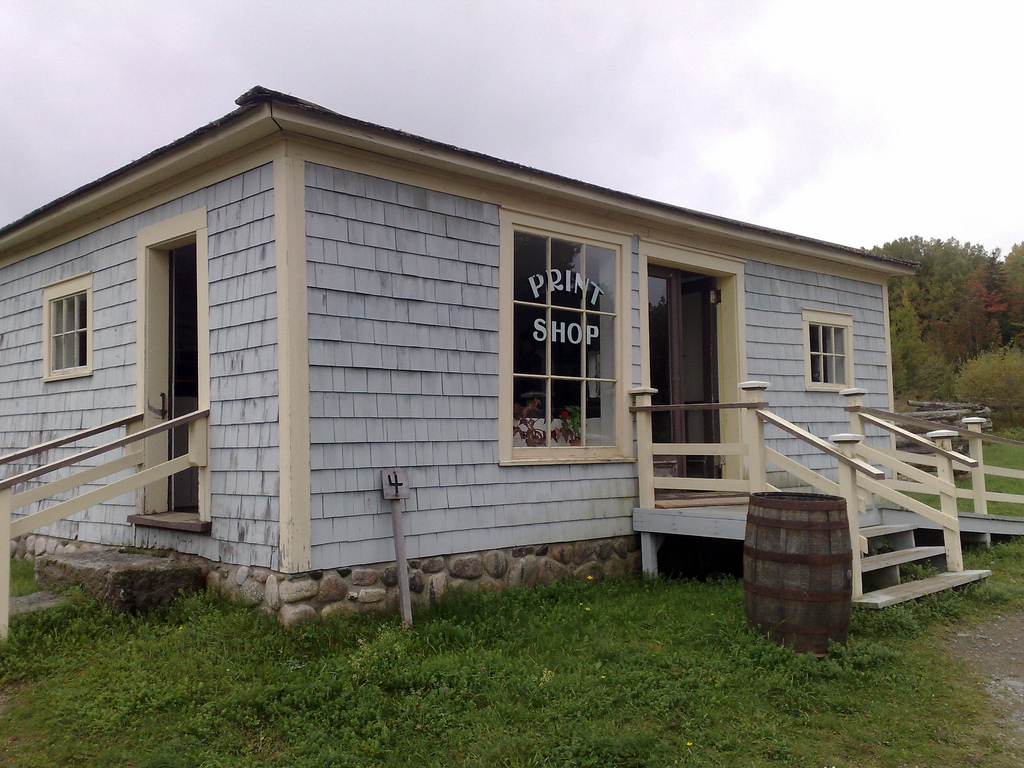 Inside I found an incredibly nice man, dressed in ye olde period costume who, on learning that I was a fellow printer, immediately dropped the act (there was nobody else around, after all) and invited me past the threshold and into the shop for a tour of all the wonders there to behold.

King’s Landing turns out to be the final resting place of much of the remaining letterpress gear in New Brunswick: when a print shop closes or burns down or decides to clean house, the gear gets shipped off to Prince William. The best of it makes its way into the living print shop; the remainder is waiting to be sorted out in the large basement that sits underneath. 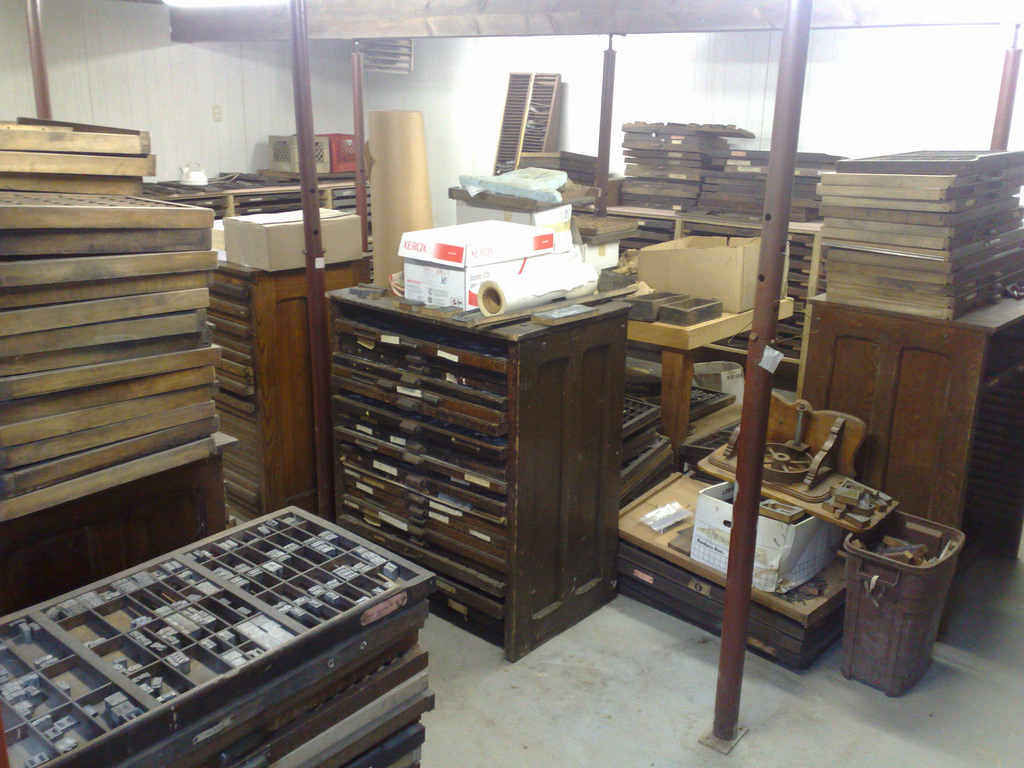 The saddest part of the Print Shop story is that they suffered a flood several years back, and the basement was badly flooded, as disaster they’re still recovering from: many of the type cases in the basement are warped out of shape, and a lot of the wooden type is covered with mold and grime. 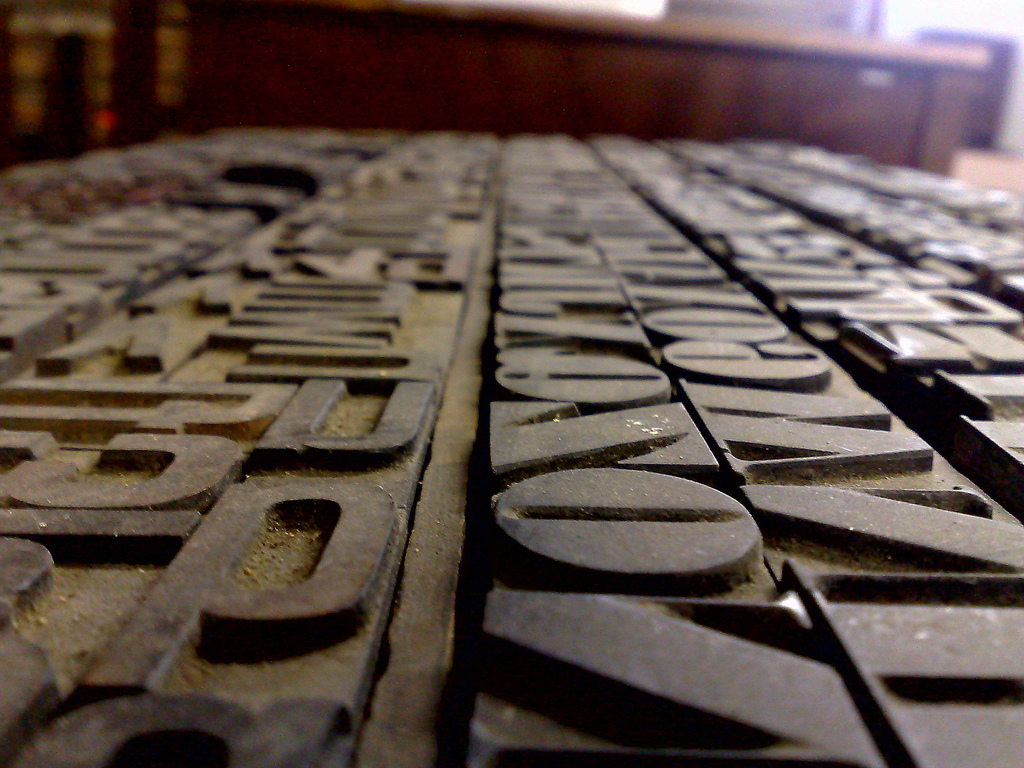 Otherwise, though, it’s a wonderful shop, with two large C&P presses, an 1870s-era Golding press, and a Kelsey Excelsior that’s very similar in structure to my own Adana Press, albeit much older.

The shop is very well set up with wooden furniture, leading, a wonderful paper cutter, and a proof press. They’ve also got a good collection of wood and metal type (although much of it sits in the basement waiting to be cleaned an organized).

The printer was a wonderful man, ready to talk the trade for as long as I wanted, and he was full of great stories. If you’re interested in letterpress, and are in the Fredericton area, I highly recommend a stop in (they’re open until Thanksgiving, and then again in the spring of 2011). 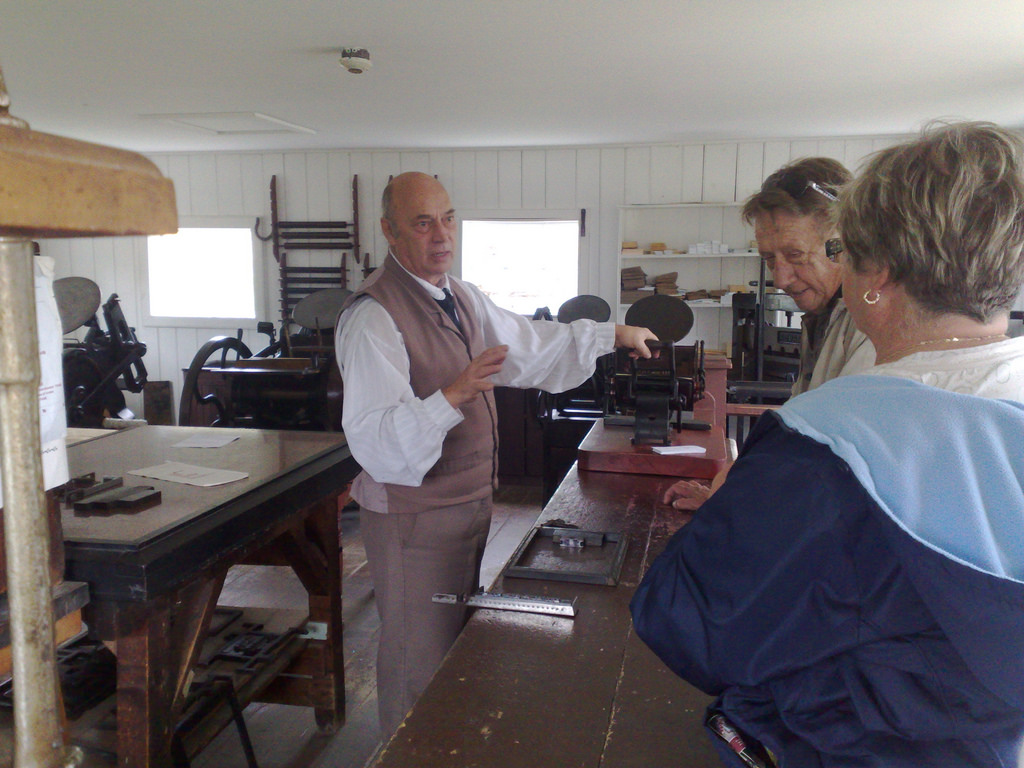 The quiet minority of readers who enjoy posts about letterpress are very happy. As are their wives, who are much less likely to post a comment on a blog.

If you ever find yourself in Burlington, Vermont, there’s an excellent print shop at the Shelburne Museum. Attended by a man who’ll talk your eat off about letterpress.

I would visit if only for the opportunity to have my eat talked off.

You NoHo residents and your hip slang-talk.

I’ll have to keep this in mind on my next drive home. Thanks!