As any Canadian small business owner will tell you, monthly federal payroll remittances are are formidable foe. This isn’t because of the amount of paperwork — it’s one form, three fields, and a cheque — but simply because the penalty for not remitting by the 15th of the month is immediate and severe.

I encountered this for the first time last year when, because I had the flu and was at home sick, the remittance envelope was late into the mail, and arrived at Revenue Canada 2 days late. The penalty for that 2-day tardiness? Just over $250.00.

I disputed the penalty, explaining that I’m the only person doing the monthly payroll, and couldn’t be expected to do this from my sickbed. They were unforgiving, and, after a length review period, my request was turned down with the explanation that I didn’t have a valid excuse and should have made other arrangements. Fair enough, I suppose.

There’s nothing like a $250 penalty to chasten you, and so since that time I’ve been obsessive about getting the brown Revenue Canada envelope off well in advance of the deadline.

Before I headed off to Italy for two weeks last fall, a trip that spanned the end-of-month payroll time, I prepared everything well in advance, and had my remittances off to Revenue Canada by November 24th.

They claim to have never received them, and I got whacked with another penalty.

This time, though, justice and truth were on my side: another cheque, sent in the same envelope, was cashed, proving that they received the envelope and that it was a processing error on their end, not mine.

It only took five months to sort out, but my dispute of this penalty was — miracle of miracles — accepted, and the penalty was canceled. Here’s the letter I got from CRA a few weeks ago (personal CRA staff details excised): 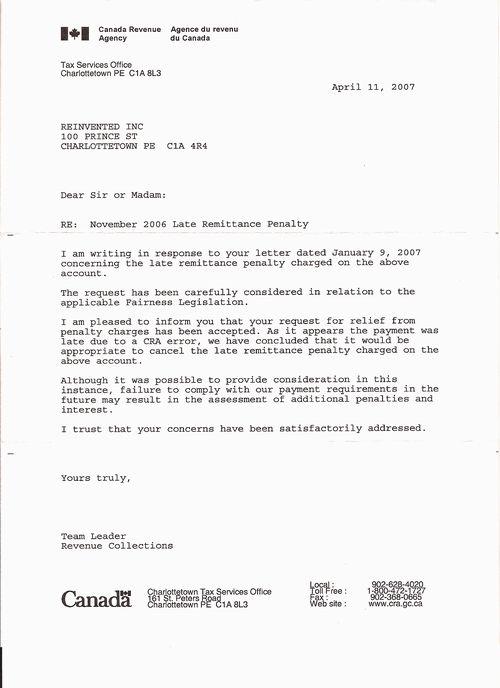 Note that they felt compelled to add a “before you go off half-cocked and thing you’ve got a free ride in future” paragraph before signing off, just so my chastening wouldn’t wear off as a result of this minor victory.

I had a run-in with this payroll thing. A few years ago, after an unexplained mail-delay caused a penalty (which I think was well over $250.00), we began dropping off our remittances. Just under three years ago I noticed another penalty and called about it. With whatever information the feds were able to provide I checked our records and indeed our cheque had been *dropped in their mail slot* the day before it was due. But, alas, it was lost. However, that’s not what they said… they said, “Mr. O’Brien, you’re welcome to come look for the cheque yourself but I assure you had it been dropped in the mail slot we would have it.” (or something to that effect).

It got testy and they went into our record (we had an exemplary record except for a short period in which we had cash-flow problems, but suffice it to say, over 10 years we were on time over 97% of the time — and always paid their darn penalties when we werent). I nearly flipped when they started talking about our record because they were essentially saying, “you’re lying and we know you’re lying because you’ve missed a payment deadline a couple of times in the past”. Lawyers will understand that past history cannot be used to convict, only to determine the degree of sentence — well, if you couldn’t used a pattern to convict in a court, why would we permit our government to use it to call us liars (strong word but that’s what it comes down to).

Anyway, the issue was going no where until I noticed they have a surveillance camera over their mail-drop. Once I asked them to look at their tapes for the date Kate said she’d dropped the cheque we were refunded our penalty.

Then I went after them for the interest they charged us and got that.

Then I went after them for interest on our money they were using and got that.

It took something over a year and a half to complete the entire issue.

Something ought to be done. These people should be REQUIRED to believe us until they know we are not telling the truth, not the other way around. And while I’m at it, a single-person outfit like your’s Pete, ought to be able to use illness as an excuse.

I have one post-it note on the wall, it’s a reminder of the 15th of each month.

I have to say, the greatest stress in running a small business comes from dealing with CRA. I’m pretty diligent, but as with any small business operator, some things get forgotten on occasion. Those omissions create grief for months and sleepless nights. Really, the errors are not intentional. How can you be so punitive?

CRA is unforgiving when it comes time to sort out discrepancies—they are honest mistakes. They’ll phone and ask if an amount was for this month or that month. No other explanation—boom a few days later, a several hundred dollar penalty arrives in the mail. No chance to discuss what the issue was or find out what the options are, etc.

I really dread receiving those distinctive brown envelopes—what is it this time? With sweaty hands, bated breath, and racing heart, I open the envelope. Whew, relief, it’s only the monthly remittance form for the next pay period.

Granted we shouldn’t let chronic late payers off the hook, and fraudsters should see the full extent of the law. But I really wish CRA would put on a human face and treat clients (yes, that’s who we are) with some respect and dignity. Realize that even at the lowest end, those penalties represent one or two days salary that comes out of our pocket. That is harsh.

I have only been in business for about 6 months. I already have a handful of stories. First, of all, I agree with what all of you wrote above. They are very unforgiving — far worse than any other organization I deal with in regards to late payments.

My first story was when I got a late-payment letter in month number two of business. Impossible! I filed it on the 30th of the month since no further pay cycles were going to happen after that in that cycle. Big mistake! They couldn’t figure out that it was an early payment, but instead marked it as a late payment for the month before. They assumed (of course no call to check) that since I paid after the 15th and before the 30th, that whatever it was I was depositing must be late! It took me a few days but they reversed the charge. Since then, I’ve been sure never to try to pay them early. They don’t like it early or late!

My second story is that I have often (and even right now) received my ‘official form’ (which, btw, is nothing more than a green coloured form of this PDF that you can simply print off the internet: http://www.makfinancials.com/c… . Oh, it probably has some high-security thing woven in the fabric so that your neighbour doesn’t accidentally pay your payroll remittance for you…

but I digress. I always get this stupid things LATE! It’s the 10th today and I have 2 business days to pay before it’s late. Obviously now i have to go to their office. When I complain they’ll probably just smile and tell me that it’s not their fault.

Finally, how in the world can they not accept payment at a bank without an ‘official form’? Does not the bank have the ability to verify who you are? Surely they can work with the financial institutions and find a way to make things work better, no? No. Exactly correct I am. No they can’t.