A commercial under the tagline “It’s not what you think, it’s what you know” has been running on the local CBC station here for the last while; the commercials drive traffic to a website with the same messages. 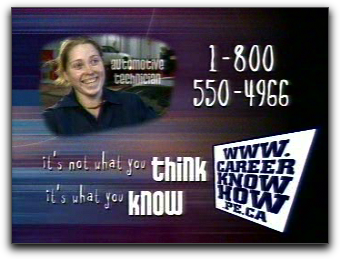 
The irony is that to excel in the trades — and I consider my work to be a trade as much as any other — requires the ability to think — to imagine, innovate, solve problems, improvise, ponder and solve — much more than the ability to execute a robotic series of tasks. As a prospective employer, I ultimately don’t care at all what skills you have going in (“what you know”), I care about what kind of person you are, whether you have learned how to learn, whether you care about your work, whether you can work as a member of a team, and help to solve new and unique problems (“what you think”). Compared to those qualities, whether you can write elegant PHP code or not is, relatively speaking, irrelevant.

Thinking may cause irritation in a lot of jobs, I know from experience.

It’s a famous catch-22 of job hunting that you need to have experience to get experience. I think your apprenticeship is an exception, at least insofar as it was conceived as such. Most employers seemingly don’t want to have to teach somebody how to use MS Word. I believe some big companies train new admin assistants to use Word, but I expect they did that because it was cheaper than highering people with experience.A small employer like yourself would definitely take a hit in productivity if you have to devote “resources” (i.e. your own time) to teaching an employee all the rudiments (e.g. your PHP coding example, but where the employee doesn’t even know what coding is).Limited patience for training seems like just the flip side of the current paradigm of personel liquidity/instant downsizability/no more gold watches and pensions, etc.Not that it isn’t a trend worth bucking, but I think that this is a monolithic one with a good head of steam.

Of course, this is an American talking.What’s great about Canada is that it refuses to slide infinitely far down every capitalist slope.So go buck that trend.Show us how it’s done.Of course,down here we’ll probably continue the drive downward, but at least our few liberals can look north and enjoy a bit of humanity vicarously.

The real allusion is to “it’s not what you know, it’s who you know” — and for those who don’t know the “right people” that’s as much as apparently can be expected for employment policy. As you say, a recipe for mediocrity.

I think you are missing the point: The “awareness campaign” is so that kids in highschool can find out what they need to do while they are young in order to be ready to enter the trades. A lot of kids get out of highschool without enough math to become an electrician, pipe-fitter, etc..

Perhaps they could have said something like “It’s not what you think about how to get a decent a career, it’s what you know (and do) now that matters”… but that’s a little long.

I’ve had the exact same thought, Peter.
I’m guessing the point and implication of the line is supposed to be “It’s not what you think you know, it’s what you know”, meaning “You’re not as smart as you think you are, kids. Come and learn what you need to know.”
Whatever it’s supposed to mean, I think it’s a message that a bit more thinking could have gone into.

This idea of being filled with knwledge at a school is wrong. Consider say the SOB’s. Not one of them went to school” to learn what they know now. But at Technical schools they teach programs such as Dreamweaver and Adfobe and think that they have taught the student something — all they have taught is a skill not the underlying understanding. If we only teach skills from a manual there is not understanding and no ability to keep up.

I thjink the idea of school where a clever teacher drills the students with a set of skills is a broken model. The world no longer stays still long enough to hold a set curriculum together for any period of time. Secndly we don’t learn by being lectured too. Lastly unless we ourselves are passionate we will not get the skils to compete against those who are.

I think out kids have got to get off their respectives asses and get out there and learn as as artisans. Apprenrticship is essential or at least a peer group. Having a bit of skill just isn’t good enough to keep you safe. Look at all the white collar commodity jobs being being outsourced to Asia. Find your passion and get on with it. You will outshine the merely trained any day

The slogan was aimed at dispelling some of the prejudices that exist against careers in the trades.
I remember several years ago hearing an interview on CBC about the looming shortage in trades people ansd the interviewer saying to the guest “Come on now, no one really wants their child to become a plumber!” I expected a deluge of outrage, but there was none. I think there is a prejudice against the trades (what you think) until people learn the reality that these are highly skilled, good paying professions whose practitioners command a lot of respecr from those who hire them (what you know). The ad was not telling people NOT to think — it was. in fact, urging them TO think…about a career that, it seems, many don’t want to consider.

Ann’s comment is quite insightful. I think the slogan could have been worded better, but I did get the impression that the ‘it’s not what you think’ part is kind of a stand-alone statement, with ‘it’s what you know’ tacked on to the end.

Perhaps a better way to get talented people interested in the trades is to show that one can have a secure, long-lasting career in this area, which needs to be tackled both through marketing and also through support in the job area itself, like apprenticeships, etc.

Isn’t there a problem with the message when it is tied to valuation of wages for these positions which top out in the low end of the 30Gs. Who benefits from encouraging talented young people in to career paths which have such low potential maximum earnings? Is it the young people or the not so young people who find that the economy needs this work done but may not want to pay national market value?

I’m not sure if it is automation and brain-shrinking, or is it some sort of geurilla ‘up-sell’ to which staff much submit… but “just the burger please” is being confused with “give me a bagfull of food” more often all the time.

Young people aren’t being asked to think at work. This is the legacy of fast food and automation. I tried to order a burger “out of combination” the other day which took longer than most ‘waiter at table menu discussions’.

The time bit wasn’t the issue. When I got to the window I was handed a combo; it’s accuracy.

While Ann’s comment is insightful I still can’t help thinking how wrong the slogan is. In the world I live in my approach to problem solving, my ability to think, is the only thing that distinguishes me from a sea of phd’s and recent graduates who are absolute masters at acquiring technical skills.

I have a job where i deal with customers everytime i go into work. Sometimes they r rude and sometimes they r nice, but it is the rude ppl that u remember. I don’t understand why ppl have 2 b rude all the time a simple please and thank you goes a long way and i can’t talk back 2 them b/c i am serving them. The job that i have has very high expectations and it is very stressful sometimes. Sometimes you just want 2 tell ppl that it wouldn’t hurt 2 b nice. But unfortunatly that is what ‘apparently’ happens in the work force. So if you r like me, get ready for a job that you will get stressful at!