By virtue of having been born on U.S. soil, I have the odd privilege of being able to cast a ballot in this fall’s U.S general election in the 28th Congressional District, Monroe County, New York.

The procedure for obtaining a ballot is fairly straightforward: about a month ago I sent in a Federal Post Card Application to the Board of Elections. All I needed, in addition to my personal information, was my last address in the U.S.

While I was away in Croatia, my ballot arrived in the mail: 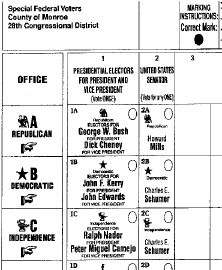 The ballot is a 8-3/4” by 11” piece of white paper (which makes it not a standard letter-sized piece of paper by 1/4”). It says, in the corner, “Copyright (c) 2004 Sequoia Pacific Voting Equipment Inc.” and my instructions are to mark the circles beside my candidates of choice in blue or black pen or pencil. I assume, from the look and layout, that my ballot will be optically scanned.

For President, I have the choice of Bush/Cheney (Republican and Conservative), Kerry/Edwards (Democratic and Working Families), Nader/Camejo (Independence, Peace and Justice), Calero/Hawkins (Socialist Workers) or Badnarik/Campagna (Libertarian). I’m most intrigued by Calero/Hawkins, mostly because Calero is ineligible to be President (he was born in Nicaragua and is a convicted felon) as is Hawkins (she’s only 24 years old; you need to be 35). This intrigue doesn’t mean I’ll vote for them, though.

And for Representative in Congress for the 28th District, I can choose between Michael Laba (Republican and Conservative), Louise Slaughter (Democratic and Working Families), Francina Cartonia (Independence).

It’s interesting that several candidates are representing more than one party; Kerry/Edwards, for example, are endorsed by the Working Families Party, a New York-based party that describes itself as follows:

The Working Families Party was launched in June 1998 by a coalition of community organizations, unions, and individuals. We saw the need and the opportunity for a political party that would tell the truth about what is going on in our society. And we believe our initial hunch has paid off, with hundreds of thousands of working people, seniors and the unemployed agreeing with our emphasis on living wage jobs, education, affordable housing, health care, and campaign finance reform.

I’ve made up my mind on the Presidential race; I’m still up in the air about Senator and Representative.

That is confusing. There’s something to be said for the parliamentary system’s simplicity in the voting process, one ‘x’ and that’s it.

Am I allowed to ask you who you’re voting for? Or do we have to wait until you’ve actually voted? Or will you answer that question?

I’m assuming you voted for Nader.

Was it strategic or did you really prefer these people?

I had to vote for Kerry: even though New York is not a “swing state,” if I voted for someone else, and Bush won, I would have to kill myself. I voted Schumer for Senator because everyone else looked like they might be a nutbar. Same thing with Slaughter for House. In 2000 I voted Green across the ticket; this time, I couldn’t bring myself to repeat.