Just to prove that I’m equally willing to argue (and sincerely believe in) both sides of an issue, let us consider the other side of the Tim Banks Big Sign issue. 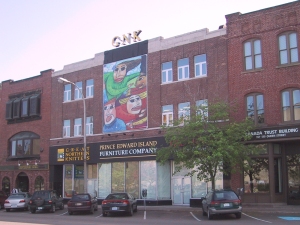 During my time in Peterborough, Ontario, one of my close friends was Simon Shields. When I first met Simon — he was a fellow boarder in a house full of various itinerants — he was working in a group home, and had a broad interest in social justice, especially where it concerned the intersection of day to day legal matters like landlord tenant law and welfare and people without the wherewithal to represent themselves in such matters.

Simon’s front for these interests was a storefront paralegal clinic called the Community Information Agency (or CIA) and through the CIA he offered no- or low-cost legal assistance to all and sundry.

One of Simon’s clients was a local musician and gadabout named Ken Ramsden who, among other things, fronted a band called Reverend Ken and the Lost Followers. Ken’s practice was to staple posters for his upcoming shows to the various utility polls of Peterborough, and it was this behaviour that ran him afoul of the law.

Ken was charged under a City of Peterborough bylaw that prohibited postering of this sort. Before a Justice of the Peace, Simon, presenting the case on Ken’s behalf, admitted Ken’s actions, but held that the bylaw itself was in violiation of the Canadian Charter of Rights and Freedoms and its guarantee of freedom of expression.

The Justice of the Peace found this not to be the case, and Ken was convicted. On appeal to the Provincial Court (where Simon’s reprsentation gave way to lawyers more skilled in such matters), Ken’s conviction was overturned, and this was upheld on further appeal to the Supreme Court of Canada in Ramsden v. Peterborough (City) [1993] 2 S.C.R. 1084.

I lauded Ken’s victory at the time, and continue to think he was right to pursue the issue.

This is, of course, in stark contrast to the opinions I presented earlier regarding the Tim Banks Big Sign.

One of the cases considered in v. Ramsden was Irwin Toy Ltd. v. Quebec (Attorney General), [1989] 1 S.C.R. 927. The Court in that case gave some substance to the notion of freedom of expression:

(1) seeking and attaining the truth is an inherently good activity; (2) participation in social and political decision making is to be fostered and encouraged; and (3) the diversity in forms of individual self-fulfillment and human flourishing ought to be cultivated in an essentially tolerant, indeed welcoming, environment not only for the sake of those who convey a meaning, but also for the sake of those to whom it is conveyed.

And in this same spirit, I would argue that it is unreasonable for the City of Charlottetown to seek to regulate the sort of expression that has spilled out of Tim Banks with his Big Sign.

The problem with regulation like this, wherein a public body, through a select committee of well-intentioned aestheticians, attempts to place boundaries on expression (whether through regulation of paint colour, house cladding or signage) the result is a weird mausoleum-like homogeneity to the regulated area.

We preserve the stately homes with their historically-correct clapboard and pre-screened milk paint colour schemes and we attempt (but somehow fail) to cut down on the gaudy fast food neon, but in doing so we also excise creativity and the general “freedom of expression quotient” in the community goes down.

Here’s an example from far away. Pictured below is a snapshot of the Khao San Road in Bangkok, arguably among the least aesthetically regulated places in the world: 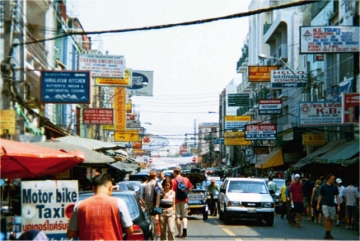 While I’m not sure I’d want to have downtown Charlottetown’s Queen Street look exactly like this, at the same time there is a sense of vitality, creativity and life to this street that is almost entirely missing from Charlottetown. What’s more, this same “anything goes” approach to design and signage results in things like this: 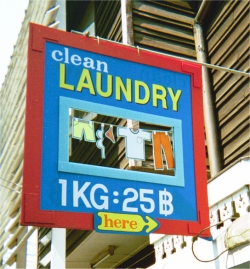 A diamond in the rough, as it were, and something not too far in spirit from the Tim Banks Big Sign.

Now I won’t go as far as actually suggesting that Tim Banks is a cultural revolutionary (despite what I suggested in the title of this note), but in light of all this, I do have cause to reconsider the hertiage and signage policies that he rails against in a new, more Draconian light. And to think that perhaps if Tim Banks has the freedom to put up a big painting to help him sell sweaters, then maybe I too have the freedom to do things I never considered.

It won’t surprise me if I hear that your mention of Ken Ramsden generates way more traffic to your site that Tobey McGuire ever did. I went on a date with Reverend Ken once — and he is for sure the superior heart throb.

I went to see Billy Bragg about a month ago here in the big smoke. He was telling the audience about his concerns regarding anti-postering policies being established by the city  — imagine all those lost pet signs, he said, people will have to buy large billboards along the Gardiner Expressway to ask “have you seen my dog?”

Fine don’t print it. You probably are just one of them. No one there can make it without a diaper.

yes, ann, rev. ken is the superior date and heartthrob and sure knows how to treat a woman. lots of fun lots of laughs and lots of love

Hey for sure Sally, Reverend Ken is alot of laughs but he is quite the lover man too. Idon’t know if time has been good to him but he sure was good to time. Nadia

An important correction: Ken did not staple the posters to power poles. He (and I, as one of his many helpers) used masking tape. Simon brought this out in evidence, and the courts noted it.