I received an invitation to attend a “stakeholders tour” of the Province House restoration this afternoon; I hold no office that entitles me to such an invitation, other than that of being a significantly-interested neighbour, so I count myself lucky.

There were two groups through the site today, one at 1:00 p.m. and the second at 3:00 p.m., and a lunch appointment required I attend the second; this turned out to be a fortuitous happenstance, as a quintet of Island-history-steeped–Linda Berko, Jim Macnutt, Ed Macdonald, Reg Porter and David Keenlyside–were in attendance. It was like visiting a record store with the Beatles. Suffice to say, many, many, many questions were asked and answered, and when the tour guides didn’t have an answer at hand, one of the quintet was generally able to jump in.

I took a lot of photos–my favourite is the one below, of the basement–but none of the capture the essence of being inside the place accurately. I have spent a lot of time in Province House over the last 25 years: in the public gallery, in meetings, and doing computer support. I know the building well. And to encounter it in such an undressed state was bracing; it was truly like encountering a close relative’s skeletal remains.

Fortunately, everything we learned points to a careful, informed restoration process underway, led by capable people. I hold out hope that when Prince Edward Island turns 150 in 2023 we will be able to celebrate it with a newly-dressed Province House at the heart. 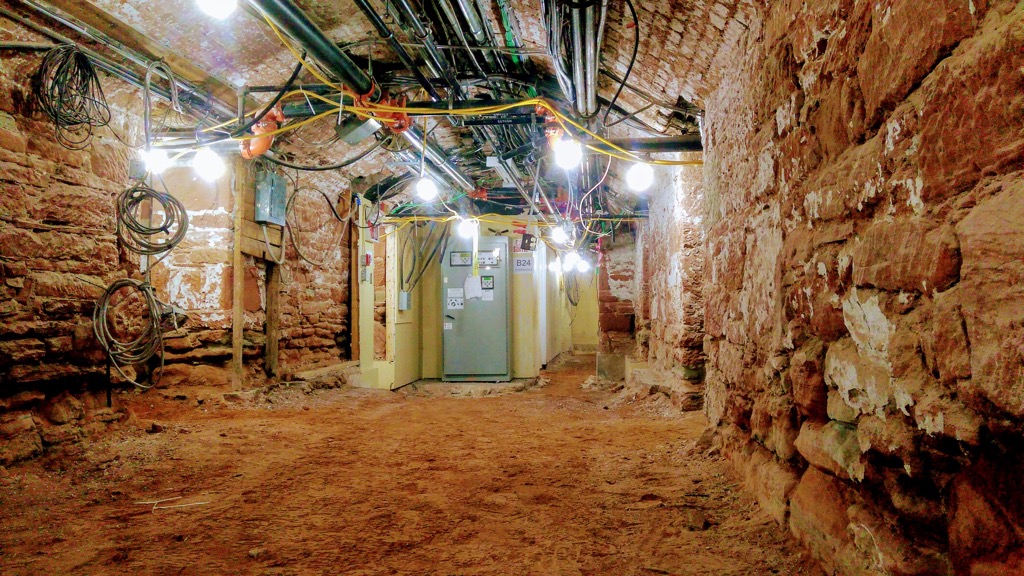 Great photo and a fascinating look inside the building.

This is a brilliant photo of the foundation of a great old building. It’s presence marks a place and time of Canada’s and The Islands political beginnings. A colonization period. It gives me mixed feelings to be totally celebratory—Indigenous people, Acadians and other early settlers gave this place its beginning. They provided the real foundation.