The seminal learning I took away from grade 2 concerned simple machines: Ms. Abrams, our teacher, did an excellent job at schooling us in the ways of the pulley, the lever, the inclined plane and the rest. There must have been something about the elegance of getting something for nothing that appealed to me, as the lessons stuck with me.

I thought of simple machines when I read Accessibility guidelines as heuristics, or the need for a ramp and emergency pants by Anne Gibson, wherein she makes a solid case for the utility of everyone installing an inclined plane at their house:

A few years ago, we replaced the back deck in our backyard. Instead of stairs leading to a damaged brick patio, I requested an ADA-compliant ramp that runs alongside the house, terminating just at the garage door.

The contractor was puzzled. “Why an ADA-compliant ramp?”

The obvious reason is because if I ever land myself in a wheelchair, or my husband does, it’d be nice if we can still get in the house.

The less obvious reason is because I am too lazy to go do the research myself on what a safe, usable, effective ramp consists of. How long should it be? What’s its maximum slope and rise? What’s the minimum width? The Americans with Disabilities Act research have already done all of that work so that neither I nor my contractor have to. We just need to comply with it.

Another word for accessible design is good design, and Gibson’s post is a helpful reminder of that.

Inclined planes entered my field of view again this morning when YouTube offered up a video of the Elbląg Canal in Poland (can the YouTube algorithm be so good that it realized I was in a simple machines-receptive state of mind?). The canal incorporates canal inclined planes to overcome a water level difference of 100 m between Lake Drużno and lake Jeziorak:

The inclines all consist of two parallel rail tracks with a gauge of 3.27 m. Boats are carried on carriages which run on these rails. The inclines rise from the lower level of the canal to a summit and then down a second shorter incline to the upper canal level. The first part of the main incline and the short upper incline were both built at a gradient of 1:24. A carriage is lowered down the incline to counterbalance an upward moving carriage. Once the downward moving carriage has reached the summit and started down the main incline its weight helps pull up the upward moving carriage. This allowed the slope of the incline for this section to be built at a higher gradient of 1:12.

Here’s a photo of one of the inclined planes in the canal: 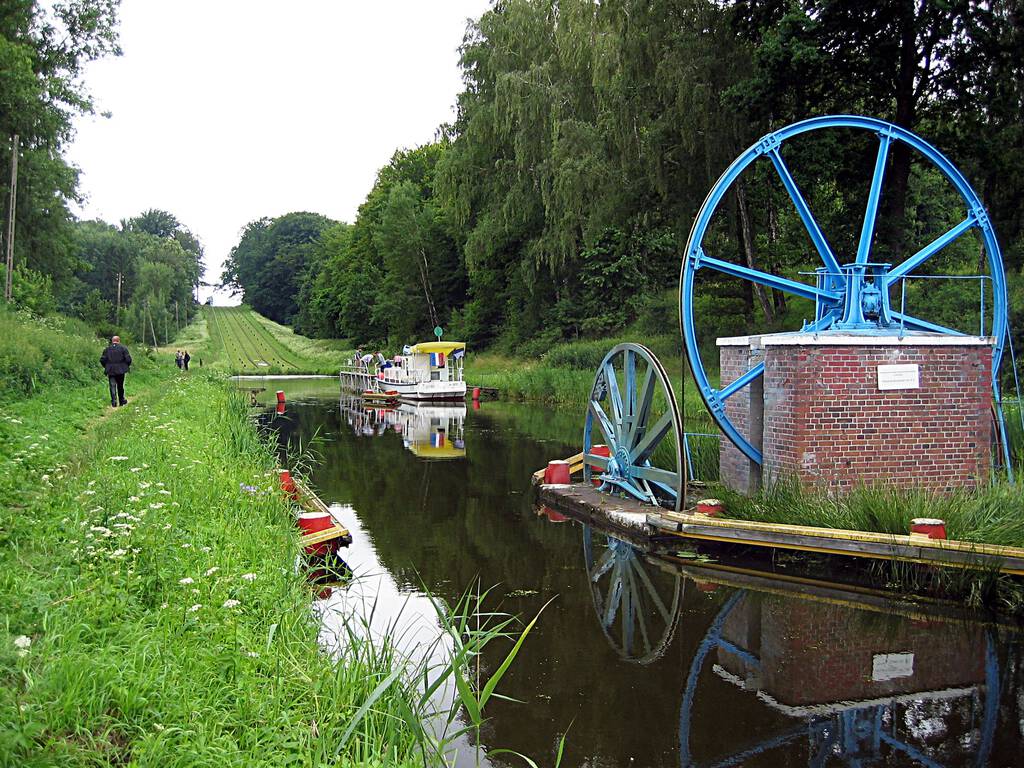 Here in Canada there is one canal inclined plane, the Big Chute Marine Railway, part of the Trent-Severn waterway in Ontario. Its reason for being is at least partially biological rather than elevational, as part of a plan to keep sea lamprey out of Lake Couchiching and Lake Simcoe:

Research was done to find a way to prevent the migration of the sea lamprey into Lake Couchiching and Lake Simcoe, while still effectively increasing the flow of traffic. A biologist sat at the bottom of the railway for days, checking the bottom of boats that locked through, and finally saw a lamprey attached to the bottom of a boat. The lamprey fell off after less than 6 meters, so the railway was determined to be effective at preventing the sea lamprey’s migration. In 1976, it was finally decided that a new, enlarged railway would be built.

As it happens, I was resident at Camp Kitchikewana, just 20 km to the west, that same summer of 1976, but knew nothing of the burgeoning simple machine megaproject next door.

The Trent-Severn canal system runs from Lake Ontario to Lake Huron and is an impressive an engineering achievement. It’s also been something of a spine for significant portions of my life: beyond my childhood proximity to Big Chute, I later worked at a summer camp at Lakefield College School (on the system), lived in residence at Trent University with a view of the system from my window, spent time at a cottage owned by a friend of my mother’s from college on Stoney Lake, dated a woman whose family had a cottage at Rama (on the system north of Lake Simcoe), and, over the years, I’ve known people from Trenton, Campbellford, and Rice Lake.

Oddly, save for taking my young summer camp charges out in kayaks in the Otonabee River, and a bit of sailing in Stoney Lake, I’ve never actually been out on the canal. I’ll have to do that someday.

Fascinating, Peter. Familiar as the idea is from other contexts, still for a second it seemed to me too good to be physically plausible, that a counterweight reduces work. I decided the system is effectively a self-recharging battery, that you charge only once, when you place the counterweight uphill. Meanwhile, speaking of accessibility, thank goodness for your wikipedia link, or I wouldn't have understood that Polish canal blurb in another half hour of rereadings.

Correction: I mean otherwise I wouldn't have understood what a canal incline plane is. Even after reading the wikipedia article and trying the Polish canal blurb yet again, I still don't understand that thing