I’m coming up on the end of a 14 year program of resuscitating the old metal window blinds that were in our house when we bought it in 2000. They’re generally in good shape structurally, but the cords have been chewed up by time, and so they need to be taken apart, the old cord extracted, new cord wound through, and new “blind cones” stuck on the end of the cord that hands down and allows them to be raised and lowered.

Which is how Oliver and I ended up roaming up and down aisle 17 and aisle 18 at the new Canadian Tire store in Charlottetown, where we were directly by comically unhelpful staff, looking for cord and cones.

I was looking for 1/8” cotton cord, but they had none, so I had to settle for nylon. That’s fine.

As to blind cones, none were evident, and, returning to other members of the comically unhelpful staff for additional help, the reaction was close to indignation that anyone would ask for directions to such an unusual product: “I know we don’t sell blinds… you could try aisle 18.” Where we’d just been roaming. We left the store.

Fortunately, at this exact moment I remembered that there is a Ditto 3D printer sitting here in the office, on loan from Robertson Library at the University of PEI for a “Minecraft Party” at Birchwood Intermediate School on Monday afternoon where we’ll use it to take Printcraft out for a ride.

So why not, I reasoned to myself, simply fabricate my own blind cones, Canadian Tire be damned.

And so that’s what we did.

Thingiverse to the rescue: we found a ready-to-print Window Blinds Pull Cone, free for the taking. We grabbed the STL file, ran it through Tinkerine Suite (the software used to “slice” the STL file and make it ready for sending to the Ditto 3D printer) and copied the object 3 times so we could print 4 cones at once. We copied the resulting “.g” file to an SD card, slid the SD card into the printer, hit “print” and we were off.

And the result, 37 minutes later: 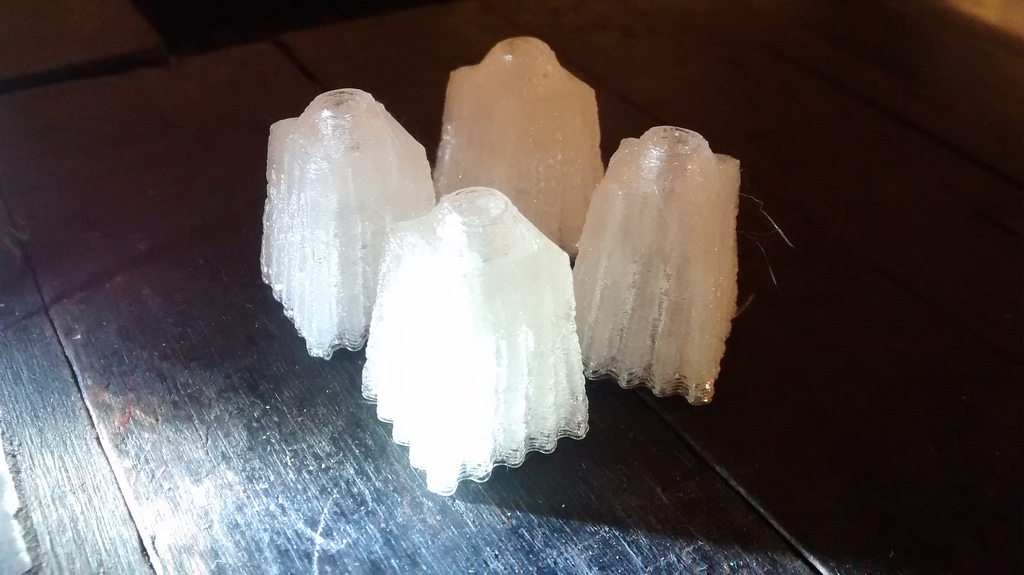 Score one for the awesome power of personal fabrication!

i thought it was going to be a story that can tire actually did have everything... but then i remembered.... peter is a man who put a printing press together from nuts and bolts and parts in a box.... he could actually be using a 3d printer... well done my friend....

As ever, some forms of progress really are good things.