On Sunday night, after Zap and before heading home to the calm and craziness of America, Ian and Tessa came to dinner here at 100 Prince. 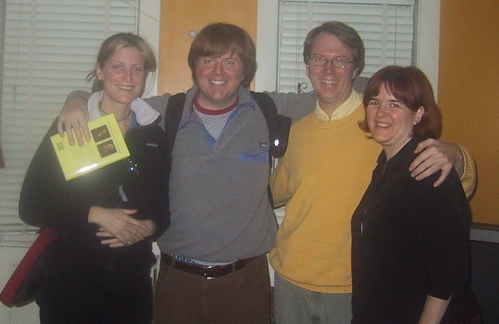 Catherine and I had a “we’ll just get pizza” discussion that morning while she was asleep, which she maintains we never had. As a result, Catherine whipped up one of her excellent “meals created as if from nowhere” dinners which somehow involved baklava and ice cream at the end, which seemed like a miracle to me.


At the point in the post-dinner conversation where the fiddles and guitars come out in a regular Island evening, the iBooks and PowerBooks came out instead, which felt oddly natural (something which alternately delights and frightens me).


And then they went off into the night. Lots of fun.


Notes: I use “dinner” here to mean “supper” as I’ve not lived here long enough to use “dinner” to mean “lunch.” Also, notice the unearthly glean in the photo bouncing off the back of the 2004 Edition of The Old Farmer’s Almanac; in finer stores now!

I have to add that Catherine’s meatballs were divine. On as road trip, it’s easy to forget how rare a home-cooked meal is, and how much more sustenance it provides.