My first quandary was that Eastlink’s pricing–$40 per line per month, including 3GB of shared data–was hard to beat; indeed, none of the major providers (Bell, Telus, Rogers) nor their discount brands (Virgin, Koodo, Fido) could come close.

Then I happened upon another Telus discount brand, Public Mobile, that I’d never heard of before. It’s an interesting concept: completely self-service, no contracts, no call centre support, and 100% “bring your own device.”

As I reckoned I could do without a call centre, and bringing my own device was the point of the switch, I dug deeper and found that Public Mobile has a $40 per line per month plan which includes 4.5GB of 3G data (you can pay more for LTE data, but I never do anything bandwidth-intensive while not connected to wifi, so I didn’t need that).

Convinced this was a viable way forward, I ordered up a couple of SIM cards, one for me and one for Catherine, and they arrived in the mail four days later.

Today I finally got around to activating the service on my phone, which turned out to be relatively simple: from the Public Mobile self-service site I entered the SIM card number, the phone number I wanted to port, my name and address, and my credit card information (I set up “auto-pay,” which is a pre-paid service that bills automatically every month). The self-service site is a little bit 2005 in its usability and aesthetics, but it all appeared to work as intended.

The only confused part of the switch-over was that although the SIM card got activated immediately (I just needed to reboot my phone to do the switch), there was a delay in porting my number, meaning that I could make outbound calls but not immediately receive inbound ones. I worked around this by sticking my Eastlink SIM back in the phone until the port happened. In the end the delay was only about 30 minutes.

For those of you keeping track, Public Mobile will be my fifth wireless provider: I started out with Island Tel Mobility back in the day, then moved to Rogers, then Virgin Mobile, then Eastlink.

I report back on how things go. 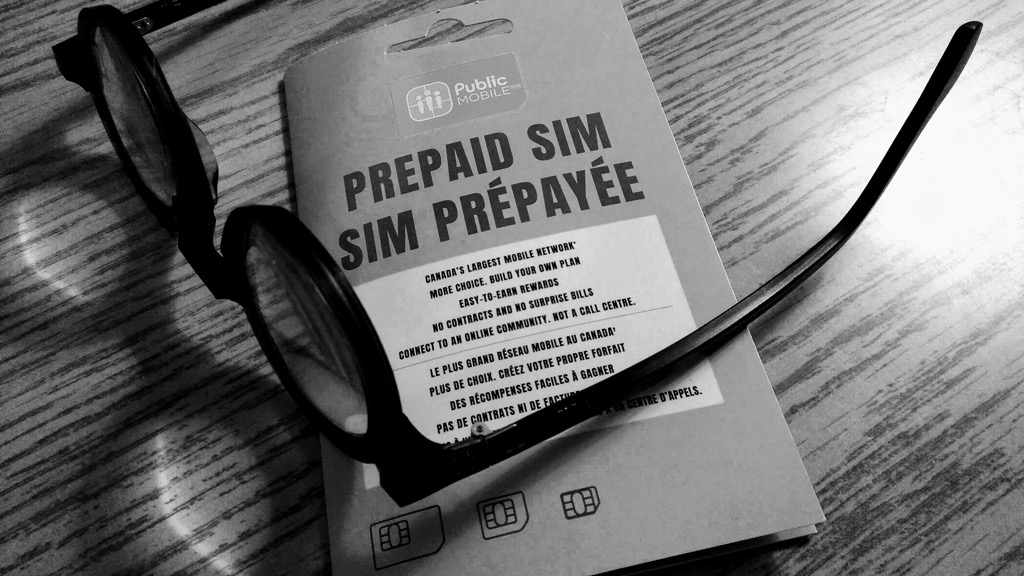 Looking forward to any updates you post about Public's service. I currently pay $45/month with Virgin and that only includes 100MB of data! Not much you can do with that so needless to say I'll be switching when my contract is up in November.

As I posted here on Public Mobile’s forum, my issue with one-time passwords not getting through by SMS has been solved by Public Mobile support.

That is odd. So without a help line to call, how do you resolve that issue?

Public Mobile does have a rather active customer forum, and from what I’ve been and to glean there, and elsewhere, this likely has something to do with my porting my number from Eastlink, but some sort of routing table somewhere up the wire not having yet been updated.

But not being able to call someone about this is certainly a drawback.

Update: Earlier this week I experienced a spate of very poor call quality when calling Catherine’s phone from mine; that, added to the issue of Public Mobile seemingly not supporting one-time password shortcodes for Twitter and Instagram (since solved) had me regretting my decision to abandon Eastlink, so I contacted Eastlink sales to inquire about porting back.

I was told that, now that my account was dormant, the only way back in would be to purchase a new VoLTE-certified phone from Eastlink; otherwise, they don’t want me back as a customer. Which only further cemented my decision to leave them behind.

I’ll keep monitoring call quality to see if it becomes a persistent issue.

Peter, are you still happy with Public Mobile? Apparently I can purchase the sim at Walmart. Any downside?

I’m still a Public Mobile customer, so that’s something.

Public Mobile’s plans remain among the most affordable of any carrier, which is why I put up with all of the above, or at least have so far.

But caveat emptor. And thanks for asking.

Update in January 2019: life on Public Mobile has been pleasantly uneventful since November. Call quality issues have not reoccured, and billing has been straightforward.